The Scandal of the McCain Campaign 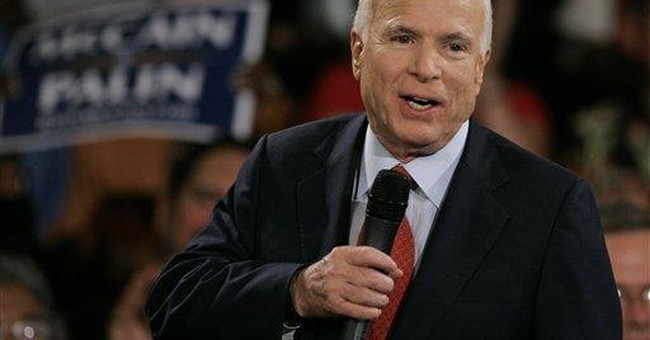 A crucial turning point in the presidential race came when the McCain campaign ended its candidate's habitual informal interactions with the press. The area of the McCain campaign plane where a couch had been installed so the Arizonian could hold court with journalists was cut off with a dark curtain, marking the end of an era.

Since 2000, John McCain had thrived on his irrepressible chattiness with the press, talking about anything reporters wanted for as long as they would listen. The press loved the access and avoided "gotcha" coverage, letting McCain explain any seeming gaffes. The arrangement worked beautifully for both sides -- until McCain became the Republican presidential nominee.

Suddenly, he wasn't afforded the same old courtesy from reporters, and he had to go about the grim business of driving a daily message. With the end of the running bull sessions, a trial separation began with the press that became a divorce that became a feud.

The enduring scandal of the McCain campaign is that it wants to win. The press had hoped for a harmless, nostalgic loser like Bob Dole in 1996. In a column excoriating Republicans for historically launching successful attacks against Democratic presidential candidates in August, Time columnist Joe Klein excepted Bob Dole -- not mentioning that Dole had been eviscerated by Clinton negative ads before August ever arrived.

The press turned on McCain with a vengeance as soon as he mocked Barack Obama as a celebrity. Its mood grew still more foul when the McCain campaign took offense at Obama's "lipstick on a pig" jab. "The media are getting mad," according to Washington Post reporter Howard Kurtz. "Stop the madness," urged ABC News' Mark Halperin, exhorting his fellow journalists to fight back against the McCain campaign's manufactured outrage.

The lipstick controversy indeed represented a silly bit of grievance-mongering. But had the Obama camp's tendentious interpretation of Bill Clinton's "fairy tale" put-down as a racial slight generated similar push-back from the media? Had Obama's ridiculous depiction of Geraldine Ferraro as a quasi-racist? Had Obama's repeated contention -- with no evidence -- that Republicans were attacking him for looking different?

The media have made it gospel that McCain is attacking Obama dishonestly. Of course, campaign advertisements are the last place to look for a dispassionate rendition of the facts. McCain's ads are no different. But they are no worse than Obama's spots.

When Obama distorted a McCain remark about staying in Iraq for 100 years -- if we were taking no casualties -- into an endorsement of endless war, the media generally tsk-tsked that McCain should be more careful about what he says. Obama just ran an ad saying McCain would cut education funding -- with no evidence. His response to McCain's supposed out-of-control negativity is a new negative ad misleadingly creating the impression that McCain aides are currently lobbying for special interests.

What has truly driven the media batty is McCain's selection of Sarah Palin. The first days after her announcement brought gross misreporting and personal smears; followed by a Charlie Gibson interview during which the newscaster appeared disgusted that he even had to talk to such a lowly and unworthy personage; followed by front-page Washington Post and New York Times reports on her tenure in Alaska that were so hostile they left it a mystery why she has an 86 percent approval rating as governor.

Palin will forever be a target. A pro-life, pro-gun evangelical with five kids, Palin has made the election even more into a culture war than it was before. Not only do national journalists resent that, they are, as urbanites and self-styled sophisticates, largely on the other side of that war as a matter of lifestyle and conviction. Because cultural matters cut so close to the core, it is nearly impossible for them to hide their allegiance.

Whatever affection they still have for McCain is now expressed in self-interested yearning: Where is the McCain of old, the one who could be reliably counted on to lose?