Obama and the Racism Card 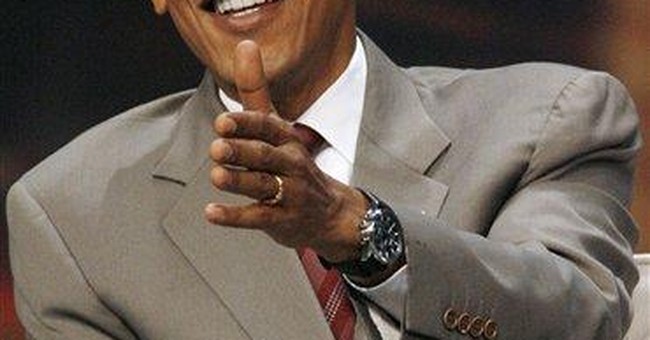 Jesse Jackson must have been forgiven by the Obama campaign and welcomed into its inner circle. Because it sure seems as if he's giving the campaign advice.

Responding to a McCain ad knocking him as a world celebrity, Barack Obama essentially accused the McCain campaign of race-baiting. It was a hair-trigger resort to the charge of racism of the sort that Jackson built a career on, making himself radioactive and anathema to the political center.

In 24 hours, Obama had lurched his carefully crafted brand in Jackson's direction. And for what?

The McCain ad intersperses footage of Obama's massive political rally in Germany with images of Britney Spears and Paris Hilton before asking "is he ready to lead?" It's rare that a political candidate is criticized for being too popular, but that's the import of the ad, and its inclusion of Spears and Hilton has been called even by McCain sympathizers "stupid," "childish" and "juvenile."

But the McCain ad had a serious point, one the Obama campaign obviously felt it couldn't ignore. Obama can be as arrogant, gassy and remote as other members of the country's aristocracy of fame. If this celebrity framework is successfully imposed on Obama, the entire repertoire of Obamania -- the mass rallies, the soaring eloquence, the picturesque cool of the candidate himself -- risks becoming a liability.

In a statement Obama repeated three times, he said what George Bush and John McCain are "going to try to do is make you scared of me. You know, he's not patriotic enough. He's got a funny name. You know, he doesn't look like all those other presidents on those dollar bills." Translation: Bush and McCain are going to go all Bull Connor on me.

Neither has done any such thing, of course. McCain has distanced himself from attacks with the remotest hint of racial undertones. When a talk-radio host mentioned Obama's middle name several times in the course of an introduction of McCain at a rally, McCain roundly denounced him. When the North Carolina Republican Party ran an -- entirely aboveboard -- ad linking Obama with his longtime pastor Jeremiah Wright, McCain loudly objected. Obama's charge is a flat-out smear.

Afterward, an Obama spokesman implausibly insisted the dollar-bills comment was not about race: "What Barack Obama was talking about was that he didn't get here after spending decades in Washington." This is rich. George Washington didn't serve in Washington either, given that the capital of the country was first New York and then Philadelphia. His path to the presidency went through Trenton, Valley Forge and Yorktown (granted, quite different than Obama's). As for the other presidents, neither Abraham Lincoln, nor Andrew Jackson, nor U.S. Grant was a Washington time-server prior to winning the White House.

Obama clearly was talking about race. He said much the same thing in Berlin: "I don't look like the Americans who've previously spoken in this great city." Did he merely mean that he has better-fitting suits and a slimmer frame?

Obama has apparently been spoiling to throw out the race charge. When he won the North Carolina primary, he said McCain would "play on our fears" and "exploit our differences." In June, he said Republicans were going to run against him saying: "He's young and inexperienced, and he's got a funny name. And did I mention he's black?"

Obama hopes to use the racism card to inhibit all criticism of him, with the presumed cooperation of the press. But there's a much larger downside. Obama's race is a political advantage so long as it is sold in a post-racial context. If his background is a symbol of how we can get beyond the poisoned atmosphere of both racism and the hyperactive, opportunistic charges of racism, it's a boon to his change-and-unity candidacy. That's why Jesse Jackson expressing a desire to perform emergency surgery on Obama was a priceless assist.

Now, Obama could throw it away in a fit of self-destructiveness worthy of ... dare we say it, Britney Spears?