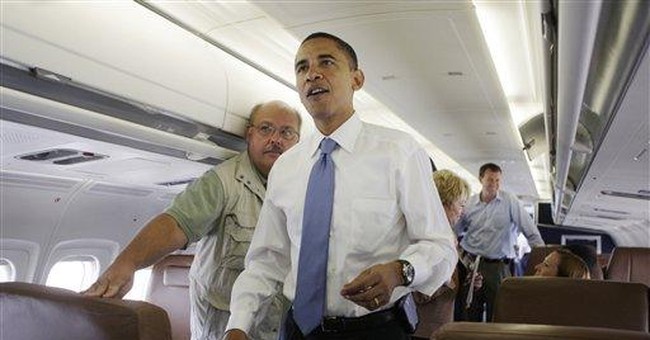 A signature moment of Barack Obama's primary campaign came last November in Des Moines, Iowa. He gave a speech at the Jefferson-Jackson Dinner that electrified the crowd and gave his campaign a kick that helped win the Iowa caucuses -- a victory without which he wouldn't be the Democratic nominee.

Obama declared that "the same old Washington textbook campaigns just won't do." Deploring "triangulating and poll-driven positions," he said that "telling the American people what we think they want to hear instead of telling the American people what they need to hear just won't do." The Democratic Party had been at its best, he told the crowd, when "we led, not by polls, but by principles; not by calculation, but by conviction."

"I run for the presidency of the United States of America because that's the party America needs us to be right now," he vowed, staking his candidacy on the achingly idealistic premises of a new, more forthright and uncalculating politics.

What makes Obama's "textbook" dash to the center so extraordinary is not just its speed, but how it falsifies the very essence of his candidacy. It's as if Bill Clinton won the Democratic nomination in 1992 and announced suddenly that actually he was not a "new kind of Democrat"; or if George W. Bush, after winning his party's nomination in 2000, forswore "compassionate conservatism"; or if John McCain, after winning the GOP nomination this year, declared in favor of a hard deadline for withdrawal from Iraq.

In the past few weeks, Obama has broken two pledges (to take public financing in the general election and to filibuster legal immunity for telecoms that cooperated with the government in terrorist surveillance); has belittled his own rhetoric during the primary campaign (saying it could get "overheated and amplified" on the issue of trade); redefined his promise to meet without preconditions with the leaders of hostile states until it's basically meaningless; endorsed a Supreme Court decision striking down a Washington, D.C., gun ban his campaign had previously said he supported; and made muddy, centrist-sounding statements about his positions on Iraq and abortion that he had to go back and try to clarify.

Has there ever in recent political memory been so much calculation and bad faith by a politician who has made so much of eschewing both? We now know that Barack Obama is not naive, but his ardent supporters are. Obama exhorted them to "believe" -- one of his favorite words -- in him and his virtue above all, and as soon as they gave him the nomination he wanted, he showed how foolishly credulous they had been. When it comes to triangulating, he's Hillary Clinton without the baggage.

Forget the debate about whether Obama is "American enough." He's that great American archetype, the audacious salesman with an eye on the main chance. Nothing in his utterly orthodox left-wing record ever suggested he was a transformationally unifying figure, but he sold himself as that to the audience he needed in the Democratic primaries. Nothing in his record suggests he's a sensible centrist, but he's going to sell himself as one to the audience he needs in the general election, whatever contortions it takes. In his current TV ad, he touts his support for welfare reform when he actually opposed it.

Obama is calculating shrewdly now -- just as shrewdly as back when he was attacking calculation. His left-wing base won't abandon him, and all the dewy-eyed new voters attracted by him will stay that way, so long as he continues to look and sound good. His task is to win over general-election voters in a center-right country who value hardheadedness and practicality in their presidents.