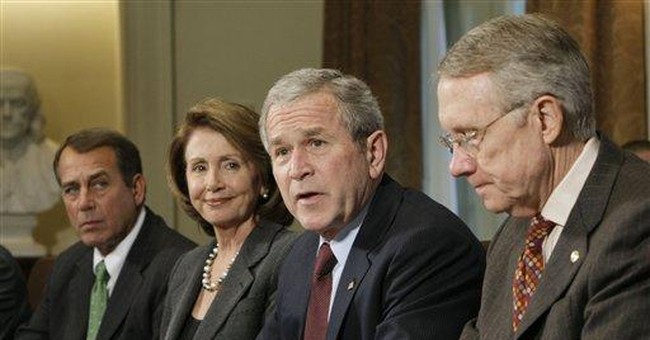 Should non-taxpayers get a tax rebate? That had been the revealing sticking point in the Washington debate over an economic stimulus package.

Democrats insisted on spreading the rebate to people who don't pay the federal income tax for a simple reason -- there are so many of them. A literal rebate in the sense of giving back a bit of what people pay in federal income taxes was objectionable because it would exclude the 40 percent of households that pay none at all.

That fact is worth noting because it puts the lie to the notion that the federal tax code is a vampirish scheme by Republican economic elites to privilege the rich at the expense of the poor. Barack Obama, Hillary Clinton and John Edwards can barely say the word "taxes" without retailing some version of this tale, which is detached from reality and has been getting steadily more so.

The number of people on the lower end of the income scale who are exempt from federal income taxes has been increasing, while the proportion of the federal income tax burden borne by higher-end taxpayers has gone up. If this is the fruit of Ronald Reagan and George W. Bush class warfare on behalf of the wealthy, the boys down at the yacht club have to be bitterly disappointed.

People at the lowest end have been escaping federal income taxes entirely. More than 40 million income-tax filers have no income-tax liability. President Bush's tax cuts increased the number of people in this category by millions. And more than 20 million families pay no income taxes while getting a check from the Treasury thanks to the Earned Income Tax Credit, a bipartisan policy that President Bill Clinton made one of his causes.

Our tax system is hugely redistributive. When all federal, state and local taxes and spending are taken into account, the lowest 20 percent of households got $8.21 in spending for every dollar of taxes paid in 2004, while the top 40 percent paid more in taxes than they received in spending, according to the Tax Foundation. Overall, more than a trillion dollars was extracted by the U.S. government and handed out further down the income scale.

Democrats counter that the rich pay more in taxes only because they've been getting richer. Yes, but no one knows how to stop them from getting richer as long as the economy is growing, and it wouldn't help anyone to try anyway. By any standard, they pay their fair share. As they pony up almost 40 percent of federal income taxes, the top 1 percent earn a little more than 20 percent of the nation's income.

Federal income taxes aren't the whole picture. People lower down on the income scale still have to pay the payroll tax to fund programs like Social Security. Even here, though, the rich bear the heaviest burden. The top 20 percent paid more than 44 percent of payroll taxes in 2004, according to the CBO.

As for the debate over the rebate, if the (dubious) premise is to kick-start the economy by scattering money around, lower-income people paying no income taxes might as well be included, as they are in the White House-congressional deal. But the moment shouldn't pass without noting what it tells us about the tax system supposedly being skewed toward the rich. It is not, except in the sense that it exacts more taxes from them.