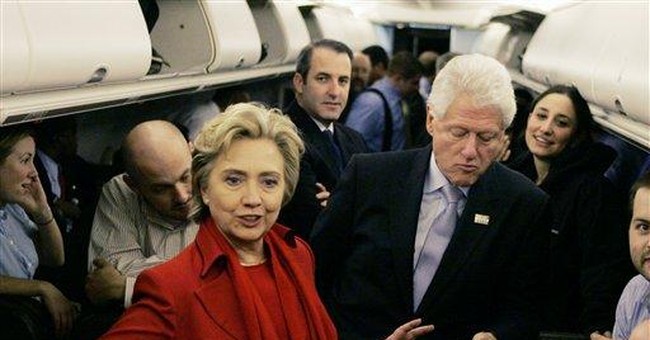 In full psychoanalytical mode, Bill Clinton once observed, "I was born at 16, and I'll always feel I'm 16."

In this, Bill Clinton displayed unusually acute self-awareness. After two terms as president of the United States and a post-presidential career as a world celebrity adored by all the great and good, Bill Clinton is still 16. In recent weeks, he has proved that adolescents can't be elder statesmen.

His performance on Hillary's behalf has been desperate, accusatory, self-pitying and misleading. It has been a full-on blast of Bill Clinton's do-whatever's-necessary ethic of the sort we haven't seen since he wagged his finger at the country almost 10 years ago and denied having sex with Monica Lewinsky (in itself, an adolescent escapade that could have been straight out of "National Lampoon's White House").

During his presidency, Clinton was supposedly assailed by the forces of Republican extremism and of an out-of-control special prosecutor. Now, he's being attacked by the forces of hope and change. Barack Obama has, by almost any standard, run a scrupulously high-minded campaign.

But that hasn't mattered. As far as Bill Clinton is concerned, Obama might as well be a member of Swift Boat Veterans for Truth. Obama is guilty of what they call in the laws of war a "status offense." He is running against Hillary, and therefore interposing himself between the Clintons and the object of their ambitions. This makes him as much fair game as Newt Gingrich, Paula Jones or Ken Starr.

Bill Clinton has distorted nearly everything he's commented on lately, whether it's Obama's record on the war or the Nevada caucus process. Before the caucuses, Clinton said that Obama-supporting union officials were following him around a Las Vegas hotel, telling workers who came up to him to express support for Hillary that their work schedules would be changed so they couldn't attend the caucus. Fantastic on its face, the Clinton campaign hasn't produced any evidence to buttress this "fairy tale."

Clinton has usually delivered his anti-Obama broadsides in a state of red-faced near-rage, as though the Clinton campaign -- with all its formidable advantages going into this year -- has been offended against at every turn. What he is displaying is the face of aggrieved entitlement, and his trademark hypersensitivity about his own legacy -- both of which are informed by his overweening ego and inability to control it.

Newsweek reports that top Democrats have been pleading with Clinton to tone it down to keep from diminishing himself. Good luck. If the dignity of the office meant so little to him, why should the dignity of the former office restrain him at all? It is the misfortune of the Democrats that the most talented politician of his generation happens to be a man-child.

Besides, Clinton has no incentive to stop his New Hampshire-to-Nevada-to-South Carolina tantrum tour because it appears to be working. Strategically, there might not be much more the Clinton campaign can do to sell Hillary, but it certainly can tear down Obama. The Illinois senator has pledged to fight back against Bill, probably exactly what the Clinton campaign wants: It's hard to be hopeful at the same time you're in a war of words with an ex-president who is willing to use any cheap and dishonest argument at hand.

The uglier the race gets, the better for the Clintons. In Nevada, mysterious "robo-calls" were made to voters that used Barack Obama's middle name, "Hussein," four times. It can't be long before the Clinton team uses Obama's relationship with a shady Chicago developer named Tony Rezko to try to make him seem as if he's running the most corrupt political operation since, well, the 1996 Clinton re-election campaign.

And if that doesn't work, there will be something else, as Bill Clinton tries to whine, kidney-punch and scold his way back to the White House, where he will have the run of the place, the happiest 16-year-old in the world.