Rich Galen
|
Posted: Aug 03, 2017 6:00 PM
Share   Tweet
The opinions expressed by columnists are their own and do not necessarily represent the views of Townhall.com. 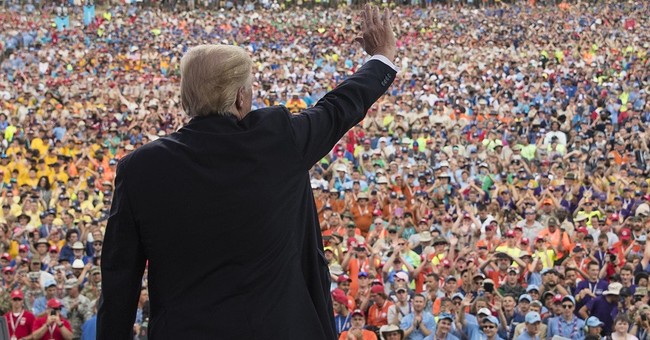 Why does he keep doing these things?

Donald J. Trump has claimed over the past few days to have received phone calls from the President of Mexico and from the head of the Boy Scouts of America - both wonderfully, terrifically, superbly - congratulatory toward Donald J. Trump.

It will not surprise you to discover that neither of these phone calls ever happened.

I am not one of those who jumps on every misstatement and calls it a lie. I think to qualify for a lie, the person issuing the statement must (a) know that it is not true and (b) publish it with the specific intent to mislead the reader, viewer or listener.

My flat-out statement that Hillary Clinton would win the Presidential election last year was not a lie. I was wrong, but I thought I was correct and I wasn't trying to mislead you.

Trump, on the other hand, claimed that the Mexican President, Enrique Peña Nieto, called him to say that illegal human traffic along Mexico's southern border had decreased dramatically because people from Central and South America knew they wouldn't be able to cross Mexico's northern border into the United States.

Nah. That qualifies as a lie under both (a) and (b) above.

As to the Boy Scouts, you may remember that Trump's speech was so inappropriate that the Scouts had to issue an official apology for allowing Trump to speak. This, via Politico.com:

"I want to extend my sincere apologies to those in our Scouting family who were offended by the political rhetoric that was inserted into the jamboree," Chief Scout Executive Michael Surbaugh said in a letter published online. "That was never our intent."

With that in mind, Trump, according to ABC News, "boasted to the [Wall Street Journal] that the "head" of the organization called him to say it was the "greatest speech that was ever made to them."

Here's a section of the transcript from the press briefing on Wednesday dealing with the phone calls ("Sarah" and "Ms. Sanders" refer to the White House Press Secretary, Sarah Huckabee Sanders):

Q: Sarah, why did the President say that he received a phone call from the leader of the Boy Scouts and the President of Mexico when he did not? Did he lie?

MS. SANDERS: No. On Mexico, he was referencing the conversation that they had had at the G20 Summit, where they specifically talked about the issues that he referenced.

MS. SANDERS: They were actually -- they were direct conversations, not actual phone calls.

Q: So he lied? He didn't receive that phone call?

MS. SANDERS: I wouldn't say it was a lie. That's a pretty bold accusation.

MS. SANDERS: The conversations took place. They just simply didn't take place over a phone call; that he had them in person.

Later, Sanders said "I don't think it's appropriate to lie from the podium or any other place," which is, of course, stupid.

Two quick examples: D-Day landings at Normandy and not at Pas de Calais, and The Manhattan Project.

There is no evidence that Franklin D. Roosevelt ever called the press corps into his office to brag saying, "Boys, I just got a call from Joe Stalin saying that D-Day invasion at Normandy was the most brilliant bit of military strategy in the history of mankind."

The two phone calls Trump invented are not impeachable offenses. Maybe they don't even reach the level of a "lie;" more of a "fib," which is defined by Merriam-Webster as "a trivial or childish lie."

But, the greater danger to Trump and to the U.S. is this: If he will make up self-congratulatory stories that are meaningless to anyone not named "Trump," then how can the other 315 million Americans trust him on the big stuff?