Rich Galen
|
Posted: Jun 09, 2016 12:01 AM
Share   Tweet
The opinions expressed by columnists are their own and do not necessarily represent the views of Townhall.com. 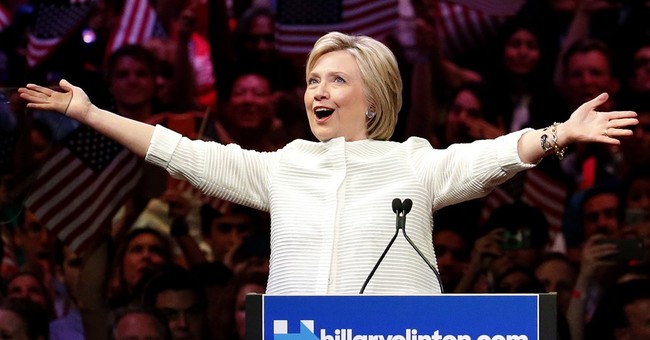 That loud THUMP you heard yesterday morning was the sound of Bernie Sanders' campaign for the Democrat nomination for president hitting a political brick wall. It was the result of this Associated Press item from Wednesday morning:

As we discussed earlier in the week, California wasn't going to decide which of the two candidates - Hillary Clinton or Bernie Sanders - was likely to be the Democrat nominee. That issue had already been settled. What it would mean was whether Clinton pranced into the convention hall in Philadelphia complete with balloons and marching bands, or skulked in through a side door.

Anyone who had expected and/or hoped that Bernie Sanders would declare his undying fealty to Hillary Clinton was disappointed. Sanders intends to go to the Convention with his rhetorical guns a'blazin' even thought, as Poltico.com reported "Top Sanders aides admit that it's been weeks, if not months, since they themselves realized he wasn't going to win."

After Clinton declared an historic victory (for which she has ample reason) Sanders took the stage on the West Coast saying, he would, according to Slate Magazine, "take our fight" to the July Democratic National Convention in Philadelphia, closing his speech with, "the struggle continues."

His supporters are no less eager to continue the "struggle." Slate quoted one member of Bernie's Band as saying darkly, "We all know, she's stolen the vote; her and the media."

So angry are Sanders' supporters that the Associated Press, according to The Hill newspaper, felt the need to issue a warning to its U.S. bureaus to "stay vigilant" after several received harassing messages from supporters of Sanders. "We have not received any specific security threats," an email to employees read, but said, "it is always good to practice situational awareness around AP bureaus and offices."

While Sanders' supporters are threatening American reporters, Trump was attempting to tamp down the outrage caused by his verbal attack on a Federal judge.

The Washington Post reported he had issued a "lengthy written statement" in which he claimed his comments about U.S. District Judge Gonzalo Curiel were "misconstrued as a categorical attack against people of Mexican heritage."

Trump's victory speech on Tuesday night was a low-key, TelePrompter-aided affair; a far cry from his comments during a conference call with surrogates in which, according to Bloomberg,

"A clearly irritated Trump told his supporters to attack journalists who ask questions about the lawsuit and his comments about the judge."

To be fair, it is clear to me that Trump was speaking about verbal attacks, not the physical attacks from Sanders' supporters that the Associated Press warned its reporters about.

So, pending illness, indictment, or incompetence, it appears the Fall campaign is set. Two of the most flawed candidates - outside of unpublishable fiction - that have ever squared off against one another.

When I have been called upon to defend Trump, I have simply said something like: Trump's ace in the hole is he is running against Hillary Clinton. She may not be the worst candidate in the history of American Presidential politics, but she's easily in the bottom five."

"What's my proof?" I have continued, "She is essentially tied with Donald Trump, and she can't shake Bernie Sanders who is hanging on to her pant leg like a pit bull."

The RealClearPolitics average of national polls as of last night had Clinton leading Trump by only two percentage points: 44% - 42%.

What will be the main themes of the two campaigns? As I Tweeted the other day:

Trump: She sold her office for the benefit of the Clinton Foundation.

Lad Link: Today's essay by @ReedGalen has some excellent advice for the Republican National Committee on how to save itself - by separating itself - from the Trump campaign. HERE.

On the Secret Decoder Ring today: Links to the California election results, to the Sanders' campaign internal strife, to the Associated Press memo, and to Trump's surrogate call.

Also the Mullfoto proving why starting a small business is so hard.