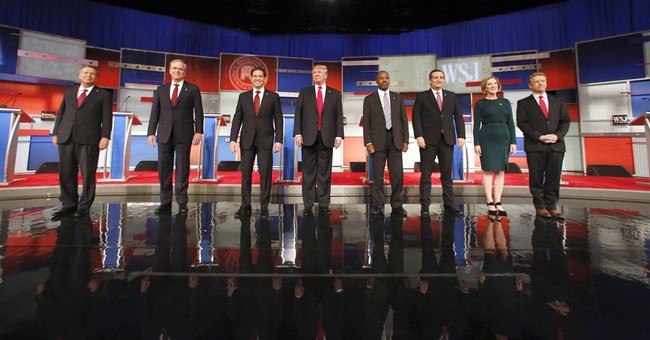 Before we begin, let's take a second to say "Thank You" to all America's veterans. Veterans Day (no apostrophe) is celebrated on November 11 in commemoration of the armistice that effectively ended hostilities in the Great War.

As we've discussed before, the Great War wasn't known as World War I until World War II happened and we realized we needed to start numbering them.

The holiday was originally known as Armistice Day and was codified as an official national holiday in 1938. It was changed to Veterans Day by Congressional action in 1954 to honor all vets of all wars, not only those of WW I.

It was folded into the Uniform Monday Holiday Act in 1971 and was celebrated on the fourth Monday in October. But, in 1978, while maintaining its national holiday designation, Veterans Day was returned to November 11 where it belonged.

It is worth noting that not a single candidate for President in either debate Tuesday night, nor any remaining Democratic candidate has served in the military.

The only remaining candidate for President on either side to have served in uniform is Sen. Lindsey Graham who recently retired as a full Colonel after a 30-year career as a lawyer in the active Air Force, Air National Guard and Air Force Reserve.

On to the debate.

Fox Business Network co-hosted along with the Wall Street Journal. Here is how I thought the candidates did (the number in parentheses is their average polling according toRealClearPolitics.com.

Ben Carson, in the most recent two polls, has pulled ahead of Trump, but these numbers are the averages including older polls.

Donald Trump (24.8%) -The other candidates were stronger on details and appeared more comfortable, so Trump's Trumpian answers sounded hollow. I don't know if falling into second place in the polls has taken the fight out of him, but Trump appeared to have lost a good bit of his strut. In fact, he was booed when he attempted to be snarky early on in the proceedings.

Ben Carson (24.4) - He still stumbles on details, but he appears to be growing on his audience. His best answer was on taxes: "If you make $10 million you pay $1 million. If you make $10 you pay $1." That fits his philosophy and his demeanor. However, on foreign affairs he sounded like Chauncey Gardner - the Peter Sellers character in the movie, "Being There."

He was either the smoothest politician on the stage, the best rehearsed or both. He is comfortable on foreign policy, economic policy, and fiscal policy. Best answer was on ISIS in a back-and-forth with Rand Paul. "Either they win or we win," Rubio said. "We better take this risk seriously; it is not going away on its own."

Ted Cruz (9.6) - Had a solid debate, but sounded like an attorney in a civil case arguing to the jury. At one point he went for an applause line on amnesty and got crickets in the hall. But, he stayed in the battle and had a very good overall debate. He's a smart guy and whether you agree with him or not, he knows his stuff.

Jeb Bush (6.0) - This might have been his best performance, but everyone else - except Trump - was better, too. Thus, this might have been too little, too late. He spent most of his time running against Hillary Clinton which is how he started this campaign. His best line came early in the program. He said of Hillary's giving the Obama Administration an "A." "That might be the best that Hillary Clinton can do, but it's not the best that America can do."

She was really smart to start out the program talking about a mother like a mother. She gets on message and stays on message. For instance, she said (as she has before) that "government creates a problem and then government steps in to solves that problem. We must take our government back." At times she lectured the others like a school teacher which annoyed me, but that may be because of the number of times I have been lectured by school teachers.

John Kasich (3.0) - As a tactical matter, he understood he was at the end of the line and had to stay in the debate. So, he kept forcing his way into the conversation. He did it one too many times when he jumped into a discussion about bailing out big banks, got wrapped around the rhetorical axle, and ended up drawing boos from the audience.

Rand Paul (3.0) - Paul sounded very much like his dad in the early going. He was in danger of falling into a debate sink hole until he came back by hitting Trump with a Leroy Jethro Gibbs whack on the back of the head. On a question about trade generally, and the TPP in particular, Trump did his act saying that Obama negotiated a terrible deal and that China would eat our lunch. Paul told Trump that China is not part of the TPP deal.

That gave him some confidence and he used his time well. I think he's wrong on his isolationism, but he presented his case well.

On the Secret Decoder Ring today: Links to a history of Veterans Day, to Lindsey Graham's military background, a review of the early debate from USA Today, and Chauncey Gardner.

Also, an amusing Mullfoto from the green room at Al Jazeera the other day.