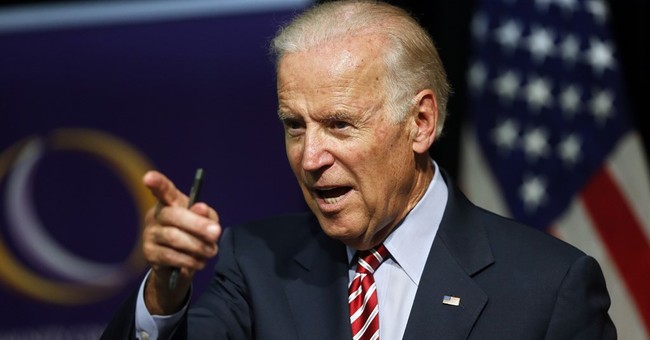 What if Vice President Joe Biden does get into the race for the Democratic nomination? What makes us think it will stay a 2½ person race? If Biden gets in (and ABC News reported yesterday that he is "90 percent" likely to run) then it will open the door to other Democrats to get in as well.
This Biden Boomlet might already have gone far enough so other Democrats in the Senate or in Statehouses are taking a second look at whether Hillary Clinton deserves a coronation, or whether Democratic voters deserve some choices.
There are 44 Democrats in the U.S. Senate and 18 sitting Democratic Governors.
If Biden does run, Clinton will be faced with waging a two front war. One front, of course, is doing battle with Republicans. Whether she picks a Flavor of the Day to attack (Jeb on Monday, Rubio on Tuesday, Walker on Wednesday and Trump on Halloween) or just decides that Walker or Bush will emerge at the top of the stack remains to be seen.
But, she will also have to go after Biden - she won't be able to ignore him as she is able to do with Independent/Socialist/Democrat Sanders. If she does attack Biden she has to be very careful that it cannot be reported as attacking Barack Obama by extension.
Biden would almost certainly come at Clinton from her left. Remember, Biden backed Obama into supporting gay marriage in the Spring of 2012 - during the re-election campaign - by saying he was "absolutely comfortable" with the concept months before Obama's people wanted the President to announce his support.
It is common knowledge here in Our Nation's Capital that there is not much love lost between the Clintons and the Obamas.
This is not new news. As far back as the 2008 primary campaign, David Corn (now a senior writer and Washington Bureau Chief for the Liberal magazine Mother Jones) wrote in a blog:

"When talking to Clintonites in recent days, I've noticed that they've come to despise Obama … They're not spinning for strategic purposes. They truly believe it … 'They really, really hate Obama,' one Democratic operative unaffiliated with any campaign, tells me. 'They can't stand him. They talk about him as if he's worse than Bush.'"

CARTOONS | Tom Stiglich
View Cartoon
A Biden candidacy would assuredly reopen those wounds if, in fact, they had ever really healed over.
Here's another What If …
Donald Trump has "soared" to a lead among Republican candidates with a RealClearPolitics average of about 20 percent. That means the other 80 percent of Republican voters are looking at someone else.
What if Trump's ceiling of support is about 20 percent and as the candidates lower in the polls begin to fall by the wayside, his 20 percent becomes enough for second place then third and perhaps lower as we get into the actual voting next February.
Just to remind, at some point in the 2012 primary season Michelle Bachmann, Rick Perry, Rick Santorum, Newt Gingrich, and Herman Cain (as well as Mitt Romney) led the national polls.
Also, four years ago when we were all in Iowa for the Republican Straw Poll, the big attraction at the Iowa State Fair - and I mean the biggest crowds and the most press attention - was enjoyed by Sarah Palin who was not even a candidate.
As the Washington Post's Rachel Weiner wrote on August 12, 2011:

Wherever Palin goes, she draws a crowd. Fairgoers were trying to spot her all morning, and as soon as she emerged, a huge media scrum developed.

What if …
What if Thursday's debate produces no clear winners and no clear losers. No soaring rhetoric and no "oops?"
This is only the first of many debates. Want to know how long this process is? NFL teams opened their training camps four days ago. We still have to go through all the pre-season games, all the regular season games and all the playoff games.
Superbowl 50 will be held two days before the 2016 New Hampshire primary.