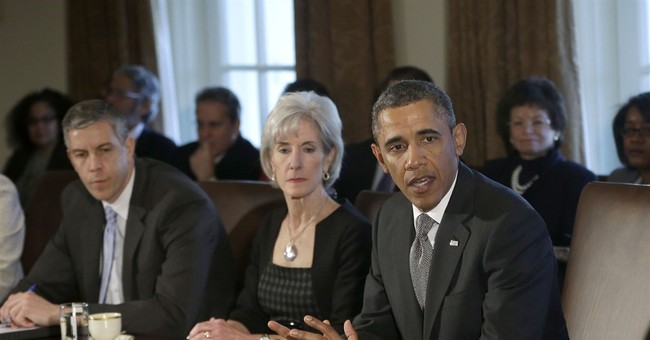 In spite of a lot of talk and promises, President Obama is one pick away from filling out his Cabinet-level team for his second term.

The scorecard? According to the Washington Post's Emily Heil and Al Kamen

The number of white men in Cabinet-level jobs increased from eight in the first round to likely 10 in this term…and one fewer woman than there were in his first.

Moreover, according to the two writers, the President didn't do very well in "maintaining diversity,

"And for those who expected more minorities - especially Latinos - not good at all."

Assuming Charlotte Mayor Anthony Foxx is confirmed as Transportation Secretary, it "would bring the number of blacks to only three, down from four in the first term."

"The president believes that diversity is very important because diversity in his Cabinet and among his top advisers improves the decision-making process.

"It improves the inputs, and therefore improves his capacity to deliberate and make the best decisions possible when it comes to policy for the country."

Which roughly translates to "Less diversity is really more diversity."

Actually that reminds me of the AT&T commercial with the kids sitting on the floor and the guy (Beck Bennett) asks: Who thinks more is better than less? A little girl channels Jay Carney saying:

"More is better than less because if stuff is not le- because if there is more less stuff you might want to have some more but your parents won't let you because there's only just a little bit. We want more we want more like you really like it, you want more."

In an article in The Hill newspaper, writer Justin Sink quoted Conan O'Brien (White, Male) who was the featured act at the White House Correspondents' dinner as saying:

"Mr. President, your hair is so white it could be a member of your Cabinet"

As Bloomberg News has pointed out:

"The three most prominent Cabinet positions now are held by men after Hillary Clinton was replaced as secretary of state by former Senator John Kerry, Jacob Lew was installed at the Treasury Department and Chuck Hagel at the Pentagon."

All three are White males.

While the Congressional Black Caucus is publicly complaining about the lack of appointments of Obama's "most loyal constituency," the nomination of a Commerce Secretary may have the unions up in arms.

According to USA Today "The AFL-CIO and other organizations have called for a global boycott of Hyatt properties" yet the President, yesterday, nominated Chicago campaign fundraising bundler Penny Pritzker (White, Woman) to head the Commerce Department.

"Pritzker, one of the wealthiest women in America, is an heiress to the Hyatt hotel fortune. Forbes Magazine pegged her net worth at $1.85 billion as of March."

Well, that should quiet the Billionaires' Caucus.

In an article in Politico writer Alex Burns looked into the potential for freshman United States Senator Ted Cruz (R-Tx) to run for President in 2016.

Son Reed Galen was asked by Burns whether he thought that was feasible. Reed said,

"Can he run? Sure. Why should Barack Obama be the only first-term Senator who gets to be president?"