Oh, the Weather Outside is... 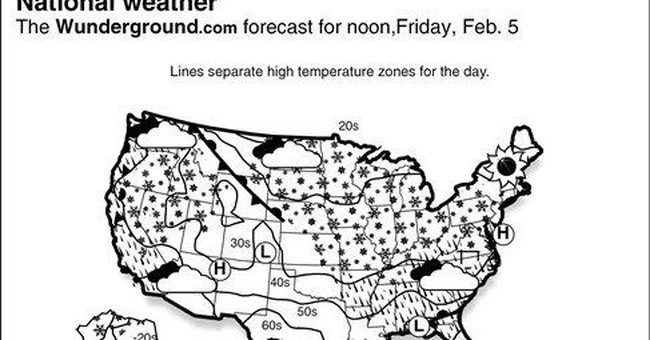 At 10:00 last night this was the official language from the National Weather Service winter storm warning:

A Winter Storm Warning remains in effect from 10 AM Friday to 10 PM EST Saturday.

Now, I know those of my many readers who live in Antarctica or along Prudhoe Bay in the Arctic consider this a mere dusting. But, for those of us who live in normally habitable climes this is a lot of snow!

In Your Nation's Capital and its environs we consider 2-4 inches of snow grounds for schools closing for at least two days, invoking "liberal leave" policies in Federal, state, and local government offices; and gathering up enough bread, milk, eggs, and toilet paper to last the 82nd Airborne Division three weeks; a good three weeks.

If this storm comes anywhere near what is being forecast, plus the four inches we got earlier this week the snowfall for the winter of '09-'10 will total over 38 inches. That is somewhat higher than the average of 15.2 inches for Washington.

The natural tendency for someone who is in the business of being snarky would be to make the point that we might not need much more evidence than this much snow in one year to support the notion that someone's been fudging the global-warming-climate-change data.

This would be jolly cocktail party fodder if it not for the fact that we are pouring tens of billions of dollars into trying to find ways to reduce CO2 levels in the atmosphere so as to reverse what used to be known as "Global Warming."

President Obama's 2011 budget, which was released on Monday, calls for $36 billion in loan guarantees for nuclear power plants.

Why nuclear power plants? Because if you want to replace the 250 million cars and light trucks in American which are currently running on gasoline (mostly imported gasoline if you believe T. Boone Pickens) with 250 million cars running on batteries, you have to have a whole bunch of additional electricity generation capacity so when those vehicles get plugged in every night there are enough electrons to re-charge them.

If you want to be able to power all those electric cars without pouring even more crap into the atmosphere from more coal-burning power plants, you have to build nuclear power plants.

Nuclear plants tend to need a rather long lead time as the people who live in the neighborhoods in which they are going to be built generally would prefer to have them built in someone else's neighborhood and so they go to court to make this preference clear to all parties involved.

$36 billion is really a big slush fund to help off-set a climate which may not be as changing as quickly as we had been told. And I think it is fair to ask if there might not be a better use for those loan guarantees than for the construction of nuclear power plants.

At least here in the Washington, DC metro area, this weekend will be one of those rare occasions when those who are believers in climate change and those who are not will be in absolute agreement.

The weather outside is frightful.