A Small Gathering in the Capital 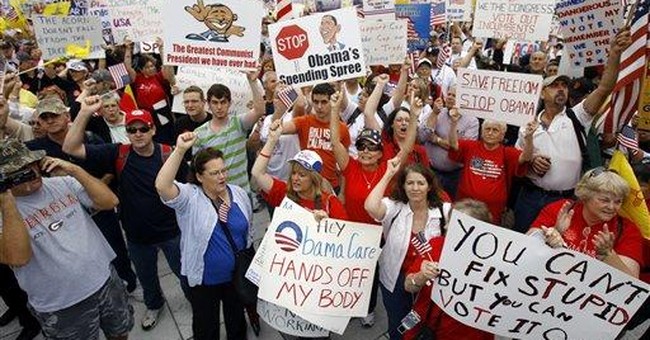 None of the national evening news anchors were there to bring you breathless coverage.

None of the networks suspended regular programming to show the event in real time.

A number of the weekend shows were taped on Thursday or Friday and didn't even mention it.

The Washington, DC subway - called the Metro - which regularly puts on extra trains for large events announced it would actually close stations if they became too crowded.

The Washington Times said, "Rally leaders estimated the crowd at about 75,000" the Washington Post said it was "in the many tens of thousands."

It is one thing for Democrats to have ridiculed the people who turned out to those town-hall meetings as isolated groups of extremists. It is something else to have "many tens of thousands" of people show up on a Saturday afternoon on the West Front of the Capitol to express their dismay over how their government is being run.

The issue for Republicans is simple. Conservatives have shown you the parade route. The question is: Who, if anyone, will be able to race to the front and lead it?

FreedomWorks Foundation, a conservative organization led by former House Majority Leader Dick Armey, organized several groups from across the country for what they billed as a "March on Washington."

I didn't know there was an outfit called "FreedomWorks Foundation" so I didn't know that Dick Armey runs it but, as I live in the immediate environs of Washington, DC I have very little idea what's going on in the real world.

Joe Wilson (R-SC) is the early betting favorite. Nancy Pelosi et. al. will overreach and introduce a resolution of censure or reprimand or something because Wilson, who called the President a liar during his speech Wednesday night, and who apologized to the President immediately thereafter, and whose apology was accepted by the President, refuses to apologize again in the Well of the House.

All that will do will be to make Joe Wilson - who was not on anyone's A list of Sunday Talk Show Guests five days ago - into more of a folk hero.

According to Politico.com, since his outburst on the House Floor, Wilson has raised $1,005,021 from 18,859 donations. His opponent, Democrat Rob Miller said he has raised over a million dollars as well.

A senior Democrat said to me the other night, "You know? At some point you just have to say 'my apology tour is over' and walk away."

I don't condone Wilson's shouting at the President, but he may be onto something. If he can find the front of this parade, maybe he can wave the big baton and give it some direction.

Or, maybe, this movement doesn't need a leader, or direction. Maybe the town-hall meetings in August and the Saturday march were something akin to what the new media types call "viral marketing."

Viral marketing describes any strategy that encourages individuals to pass on a marketing message to others, creating the potential for exponential growth in the message's exposure and influence.

Indeed, that's what the Obama campaign was doing two years ago when everyone - and I do mean everyone - thought Hillary Clinton was going to be the Democratic nominee for President. One begat two, then 4, then 8, then 16 and before you knew it he was standing on that same West Front of the Capitol taking the Presidential oath of office.

There will be more gatherings in more town-halls, and more county courthouses, and more state capitol buildings.

As Keanu Reeves said in Bill and Ted's Excellent Adventure, "Strange things are afoot at the Circle-K." If we in Washington are as smart as we think we are we will sit up, pay close attention, and meet the folks when they show up at the Circle-K.