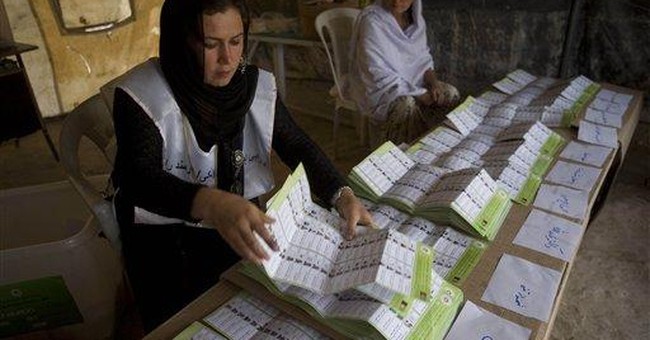 The election for President of Afghanistan is over. Maybe. If you've followed this at all, then you know that incumbent President Hamid Karzai has been in a battle for re-election (not counting minor and vanity candidates) against three other men.

The Taliban said they would disrupt the proceedings and, in the areas they control, it appears they did. Overall turnout in this country of about 33 million, was estimated to be about 30 percent of registered voters, of whom there are about 17 million.

In a country where the median age is just over 17 years, that might still be a fairly decent number given the minimum voting age is 18 and the average life expectancy is about 45.

The published voting hours were from 7 AM to 4 PM. To help drive up turnout, the government to issued a order keeping the polls open an extra hour, although not every polling place here in Mazar-i-Shareef (pronounced mah-ZAHR-ee Shar-EEF) got the word.

My colleagues and I visited some 20 polling sites in this northern city yesterday and, having seen only a few polling places in one city in Afghanistan, I am hesitant to extrapolate those few data into any kind of coherent pronouncement, although as I type this at 4:30 AM Friday morning local time, I see others are not having the same difficulty. President Obama has already declared the process a success.

Some anecdotes: Voting is segregated by gender largely to keep the men from influencing the women. As men, we were told we would not be permitted to go into the women's voting areas. That was, of course, wrong.

Of the eight polling places I personally visited during the day, a woman was in charge of the entire operation - the men's AND women's sections - in three of them.

Everyone registered voter had been issued a laminated card with personal information and a photo. This being Afghanistan, however, many women did not want her face shown, so that space was blank. If so, she had to tell the poll worker (also female) her name, her husband's name, and her father's name - all of which is on the card.

At one stop a woman came in, completely covered, and couldn't answer the questions. She was ushered out but came back a few minutes later and was allowed to vote.

Through our translator we found out that when she saw three men standing in the polling place she got so flustered she couldn't remember the answers.

The Heisenberg Principle operates even in Northern Afghanistan.

When voters came in they presented their card to be marked using a simple one-hole punch. However, the "punch machines" did not work so poll personnel used either a knife to cut an approximation of a triangle or, more frequently, simply cut off a corner of the card.

At one place we asked the woman in charge how the punch system was working. She said with a twinkle in her shockingly blue eyes, "Accidentally, our punch machine works."

Of course I could not be in a place like Afghanistan for the better part of a week without having a MULLINGS moment.

One day we were having lunch at the military base up here which is largely populated by German soldiers. It is an ISAF base which stands for "International Security Assistance Forces," although in that dark humor which soldiers worldwide are likely to adopt I came across a gag ISAF badge in the PX which was subtitled: I Saw Americans Fighting.

Anyway, we were sitting in the dining hall surrounded by some 800 or so German soldiers and got to talking about where we had gone for our undergraduate degrees such as (to pick one out of thin air) Marietta College, Marietta, Ohio 45750.

One of our number said he went to Middlebury College in Vermont, and that he had run the College Republican club there. Some of us giggled and to the others I explained, quite innocently: Middlebury? They're so far to the Left they think Liberals are … Nazis.

Actually, I don't think any Germans heard me, but there was a small group of American Air Force members sitting at a nearby table, so I slid in and visited with them while my colleagues beat a stealthy, but rapid, retreat.

One more report from overseas, then home.