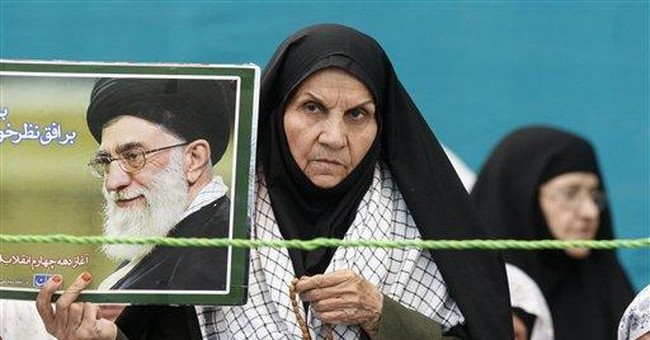 Look. I understand the enormous outpouring of grief for Michael Jackson. Just as I understood the reaction to the death of Princess Di.

I lied. I don't understand either one.

In fact, I asked a group of people yesterday afternoon if they could explain to me the public's fascination with deeply flawed people who die prematurely. I got blank stares so, to lighten the mood, I said, "I have the 'deeply flawed' piece down cold, but I think I blew right past the 'premature dying' thing."

Hearty laughter all around. On second thought, it might have been nervous chuckles all around because everyone left right after that.

While every network except USA (which, in a delicious irony of counter-programming ran Law & Order: SVU episodes all day) covered the Michael Jackson memorial service, other things were going on in the world. One of the things going on was a luncheon at the offices of the Center for Strategic & International Studies featuring the Chairman of the Joint Chiefs of Staff, Admiral Michael Mullen.

Adm. Mullen had just returned from Russia where he had accompanied President Barack Obama on his summit in Russia for what was supposed to have been yet another outpouring of national gratitude like a nation full of 13-year-old-girls at a Beatles concert in 1964 for Barack Obama having deigned to spend time with them.

However, the New York Times of all journals, headed its coverage of the trip: "For Jaded Russians, Obama's Star Power Does Not Translate"

Crowds did not clamor for a glimpse of him. Headlines offered only glancing or flippant notice of his activities. Television programming was uninterrupted [so] devotees of the Russian Judge Judy had nothing to fear. Even many students and alumni of the Western-oriented business school where Mr. Obama gave the graduation address on Tuesday seemed merely respectful, but hardly enthralled.

What? How great is this? My quandary of "where will I go when I leave the United States" is over. I can pack up all my cares and woes and move to Novocheboksarsk where men's eyes apparently don't roll back in their heads and women don't swoon at the mere mention of the name of Barack.

Whew. I can cross that off my to-do list for tomorrow.

It seems that the intergalactic love affair with Barack Obama may be cooling elsewhere, as well. A new poll by Quinnipiac University shows that Obama's approval rating has dropped from 62% in May to 49% in this poll.

Oh. This poll was taken in Ohio which, as you know, is the Novocheboksarsk of middle America.

On his handling of the economy, Obama's approval has dropped from 57 percent in May to only 46 percent now. That means that the "It's all Bush's fault" defense is losing credibility.

The problem for Obama is those pesky independents among whom he trails in approval 38% approval to 48% disapproval.

As a reminder, as George W. Bush was leaving the White House in January the Washington Post/ABC News poll put his approval rating at 33%. In Ohio, among Independents, Obama is approaching Bush numbers.

Back to Admiral Mullen who really had important things to say about Iran. Not the least of which was his statement that his biggest worry is Iran getting a nuclear weapon which Mullen said "would lead to a de-stabilizing nuclear arms race in the region."

What can we do? He said that "all options are on the table." He paused, and then added, "including the military option."

A reporter from the Wall Street Journal picked up on that verbal underlining as I had and asked Admiral Mullen about it.

Mullen tried to blur the point, but he didn't back away from it. He said the time frame for Iran successfully developing a nuke was between one and three years. "The clock is ticking," he said. "The time window is closing."

I wonder how many Delta Frequent Flier miles it takes to get to Novocheboksarsk?