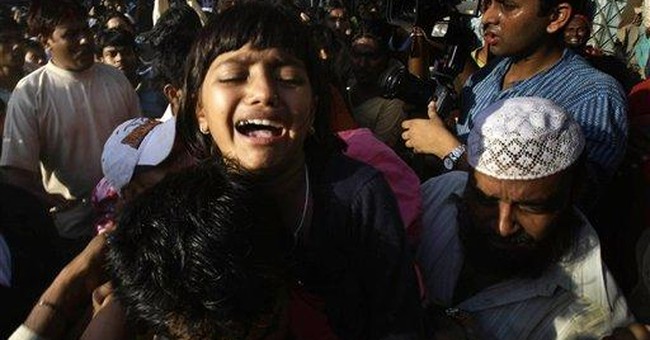 I played hooky yesterday afternoon and went to see Slumdog Millionaire. I stopped by the theater to see when the next show was, and it was NOW, so I went in - spent $20 ($6.75 for admission and $13.25 for a small popcorn, a small diet coke and a paradoxical box of Goobers) - and sat in the theater with two other people.

There were messages on the screen which asked me to put my cell phone on vibrate and warned that there was to be NO TEXTING. I made the executive decision that Twittering about the movie during the movie didn't count as texting and, when another couple came in and, with the entire theater to choose from sat directly in front of me, I decided I had earned the right to use my cell phone in any way I saw fit.

That's pretty much how I decide what rules I am going to follow in a wide variety of situations: If I am being inconvenienced then I get to choose a rule I am not going to follow. Works pretty well. You should try it.

For instance, today is Friday the 13th which I took as a sign to take two hours off yesterday to see Slumdog. See?

So, the movie. The Associated Press described the plot as: "A Dickensian tale of an Indian orphan rising above his street-urchin roots."

Talk about a buzz kill.

I don't remember the score at all and, as the songs were Indian songs, they all sounded the same to me so I don't know which one the Academy thought was the best of the year. I generally see all my movies on airplanes so I don't get to see many award winners until the year after they've won so I'll let you know sometime around Thanksgiving whether I thought this film was the best of the year.

Slumdog Squarepants cost about $15 million to produce. In modern movie terms that is the equivalent of building a new Major League Baseball stadium for $1.37. As of Wednesday Slumdog had grossed just under a quarter of a BILLION worldwide - and that doesn't even include the $33.75 which it grossed in Marietta, Ohio yesterday at the 3:50 showing.

Excellent movie. It was not a soppy downer, nor was it 116 minutes of chases and kung fu-lishness which seem to dominate movies these days.

The cast were unknown (in the West) Indian actors, it was directed by a Brit and distributed by Americans. Because it was filmed largely on location in Mumbai there was a minimum of that bobble-headedness which Western actors use to show they are playing Indians from India.

The ending was predictable, but watching how the movie got there was great entertainment. War movies are like that; we know who won World War II. I knew that Apollo 13 had landed safely, but I still got a kick out of watching it happen on-screen.

I had dinner with one of my oldest and best friends, Bill White who had a really good idea: Distribute the Federal Government.

We talked about moving the Interior Department to Yellowstone National Park; the Energy Department to Houston; Education to Princeton, New Jersey, and Agriculture to Des Moines.