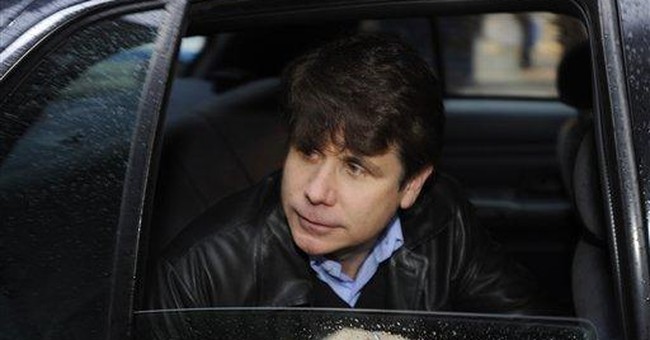 Say this three times fast: The efficacy of ethicists is an ethical ambiguity.

Ok. So maybe that's not so hard for a native English speaker. But I'll bet it's a real tongue-twister for someone who grew up speaking, say, Icelandic.

The Obama Administration may set some sort of record for having caused, at least indirectly, two ethics investigations by the U.S. House of Representatives.

Rep. Jesse "Candidate Number Five" Jackson WHO IS A DEMOCRAT appears to have been implicated in the Senate-for-Sale scandal in Illinois. According to a piece in the New York Times last week, "Federal authorities said Mr. Jackson is "Senate Candidate 5," associates of whom, the governor said in a wire-tapped conversation, were willing to raise money for Mr. Blagojevich in exchange for the seat."

Jackson - a DEMOCRAT - has denied having any involvement or having sanctioned anyone else to make any offers to Governor Blagojevich (a DEMOCRAT) to gain the U.S. Senate seat vacated by President-elect Barack Obama (who is also, by the way, a DEMOCRAT).

The House Ethics Committee has a duty, it seems to me, to open an investigation into whether Jackson or anyone connected to him offered anything of value to Blagojevich in return for the Senate seat. Let's drag some people in there, put them under oath, and see what floats to the surface.

The other person connected to Mr. Obama is Rep. Rahm Emanuel (DEMOCRAT from Illinois) who admitted to having spoken to the Gov's now-departed chief of staff prior to the November 4th election about who ought to be under consideration for the seat should Obama win.

According to the Chicago Tribune, "One source confirmed that communications between Emanuel and the Blagojevich administration were captured on court-approved wiretaps."

Emanuel won re-election as a Democratic member of the U.S. House and, presuming he takes his seat when the 111th Congress opens on January 6, 2009 he will be under the jurisdiction of the House Ethics Committee until he resigns to take over the WH job on January 20th.

If I were advising Mr. Emanuel, I would tell him to announce - today - that he will not be taking the oath of office and his seat will be vacant thus removing himself from being under the direct jurisdiction of the Ethics Committee.

The House Judiciary Committee would have to open an investigation and issue a subpoena compelling Mr. Emanuel to testify which the Obama White House would fight under the umbrella of "Executive Privilege."

This is exactly what the Democrat-controlled House did last February when it held White House Chief of Staff Josh Bolten and former White House counsel Harriet Miers in contempt for refusing to testify about the U.S. Attorney firings.

The difference is, that happened in the seventh year of the Bush Presidency; this is happening even before Obama takes office.

Reality check: The chances of House Democrats opening an ethics investigation into either Jackson's or Emanuel's involvement is exactly zero.

Speaking of ethics, the Washington Post had a piece in yesterday's Metro section about how city officials in the People's Republic of Alexandria, Virginia (which the Mullings clan calls home) have "taken the unusual step of paying a professional ethicist to help them grapple with the moral issues involved" in making cuts to city services.

First of all, we are already paying city officials to make those kinds of choices and having an ethicist on the payroll to give them political cover will not get them a chapter in the next edition of "Profiles in Courage."

Second, if you are an ethicist how do you reconcile the fact that you have been hired - in a time of budget cuts - to help figure out which other city employees should lose their jobs?

Third, the ethicist is being paid $9,000 per year. Once you've gotten beyond the ethical problem posed above, you should ask for way more than $750 per month. I want to be the ethicist's agent.

And take 20 percent of the action.