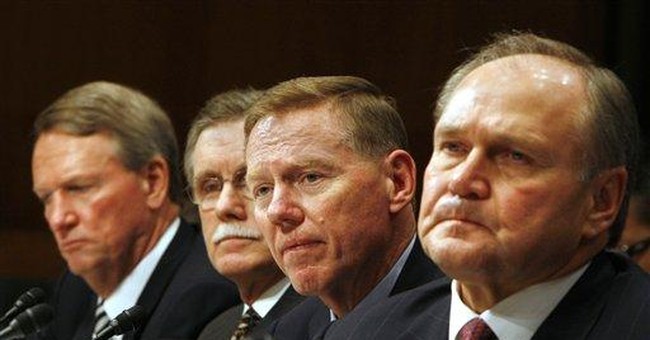 White Christmas was written by a Jewish guy. And the fa-la-la-la-la song contains the phrase "Don we now our gay apparel" which is … well, I think you know.

Which really leaves only one true Christmas song: Jingle Bells.

Oh, wait there's another one what's the song where they rhyme listening with glistening. That's some writing, right there. Winter Wonderland, it is.

Hold it! Irving Berlin did the same rhyme in White Christmas when "Tree tops glisten and children listen to hear sleigh bells in the snow."

I wonder if Patrick Fitzgerald would like to take this case after he finishes with the DEMOCRAT Illinois Governor?

I know there are a ton of Christmas songs and I like most of them. The thing about them, though, is that every Christmas season (which, now, starts right after Arbor Day) that's all you hear on the radio, in stores, and in elevators.

And because there aren't that many, you hear the same ones over and over again. But that's not the worst part. Every singer wants to have a Christmas album and wants to put his or her own stamp on those same songs, so you get very strange arrangements for very well-known songs.

Then, you find yourself humming along with the hip-hop version of O Come All Ye Faithful while you are on the escalator in the mall causing people to risk life and limb walking up the metal stairs to get away from you.

Think I'm making this up? Terry Bradshaw - the former quarterback - recorded an album of Christmas songs.

Senate Republicans appear to have held the line and stopped the $14 billion bail-out of GM and Chrysler.

According to published reports, GOP Senators wanted the United Auto Workers to accede to wage cuts which would match what American workers make at plants producing Japanese cars.

According to the Associated Press, "Sen. Bob Corker of Tennessee, the GOP point man in the talks, said the two sides had been tantalizingly close to a deal, but the UAW's refusal to agree wage concessions by a specific date in 2009 kept them apart."

The UAW apparently agreed to the cuts, but they didn't want them to take effect until 2011 when the current contract expires. The Republican Senators wanted the cuts to take place next year.

It will be interesting to see whether this is headlined as "GOP Senators Block Bailout" or "Auto Workers Refuse to Alter Contract."

The supporters of the bailout claim it is crucial to stopping a complete collapse of the economy. We'll see.

The Wall Street Journal was reporting last night that "General Motors Corp. has hired some of the U.S.'s biggest names in restructuring to consider whether to file for bankruptcy protection."

The largest number of jobs put in jeopardy by the collapse of the domestic auto industry would not be UAW workers on the assembly line but workers in dealerships across America. According to research by a professor at Boston College, "the maximum impact if the entire automobile industry in the US were to shut down completely and permanently would be 190,000 jobs in auto manufacturing."

However, the report states,

"Auto dealerships constitute the greatest number of jobs within this industry; some 1.235 million total, with about a million jobs in sales alone, most of which are part-time, each amounting to an average of less than 15 hours per week."

If Americans continue to buy about eight million new cars a year, they will buy whatever cars are on the market and, on assumes, the remaining car manufacturers will take over plants, workers and dealerships to fill the need.

We are living in interesting times.