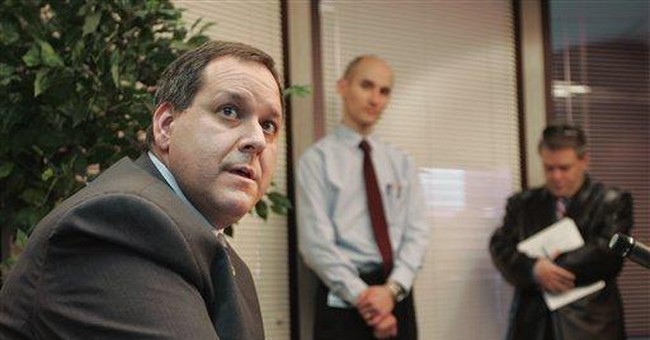 As regular readers of MULLINGS know; when I am correct in a prediction I write about it every day for the next three or four months. When I am wrong, I either ignore it or remind you that there is no way to understand all of the permutations and combinations of events which can affect an outcome.

Recent events in Ohio prove my point. They have to do with the Ohio Office of Attorney General and the resultant ripples may well last all the way to next January 20.

The Attorney General of the State of Ohio is a man named Marc Dann. Marc Dann, a Democrat, was elected in the tsunami of 2006 which swept just about every Republican office holder down the Ohio River in the wake of astonishing scandals which attended to the GOP Governor at the time.

Keep that in mind: Scandals swept Republicans out of office in Ohio, and Democrats are now in control.

Marc Dann is a Democrat from Youngstown and after he was elected he hired three of his buddies to senior positions in the AG's office.

The four of them rented a townhouse in a suburb of Columbus, Ohio which caused an Ohio GOP official to claim that Dann, "turned the attorney general's office into a raunchy frat pad."

Putting aside for the moment the obvious redundancy of "raunchy" and "frat pad" it turns out that one of Dann's buds was sexually harassing the office staff (and possibly running his Youngstown construction business out of the AG's office) and at least two other pals were either complicit or turned a blind eye.

Not only that, but Marc Dann, the Democratic Attorney General his own self, was using the "raunchy frat pad" to spend quality time with his scheduler - an affair to which he finally admitted late last week. All four of his subordinates were either fired or quit, including the 20-something scheduler with whom Democrat Marc Dann was having the affair in that raunchy frat pad, but Dann, the Democratic Attorney General has not resigned, and says he will not.

The Columbus Dispatch pointed out that Democratic the Attorney General's "troubles will be a renewable source of political fodder for the GOP and a form of drip-drip-drip water torture for Democrats."

Ohio is a pivotal state in any national election. It was President Bush's victory in Ohio in the 2004 Presidential election by 118,600 votes (out of more than five million cast) which gave him the Buckeye State's 20 electoral votes and cemented his victory over John Kerry.

With Marc Dann (D-OH) refusing (as of this writing) to resign it will give the Ohio GOP an easy target to use as a reminder to voters that scandal and abuse-of-power are non-partisan.

Joe Hallett wrote in the Columbus Dispatch over the weekend:

"As John Wayne once said, 'Life is getting up one more time than you've been knocked down.'

He also said, 'Life is hard; it's harder if you're stupid.'"

Republicans around the country should send notes of thanks to Democrat Marc Dann. He has single handedly put Ohio back in play in November.