Is It a Bad Dream? 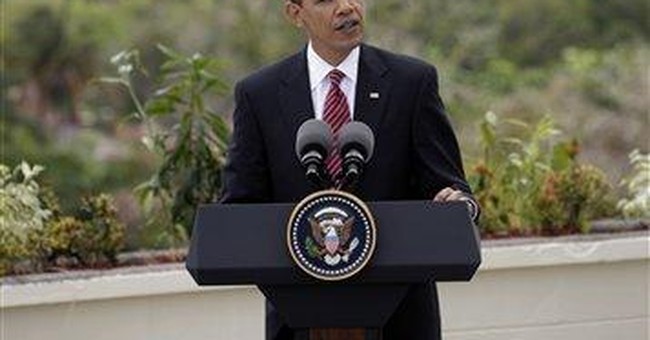 This is becoming a bad dream for growing numbers of Americans. Some sense it may be a nightmare.

Democrats must be worried. All the talk about the demise of the Republican brand should have them elated.

Yet they watch as citizens gather to oppose record levels of government spending and deficits by our Democratic president. They watch as our Democratic president changes Cuba policy – which many Americans find acceptable if limited - but he offers a smile and a handshake to Venezuela's Chavez, a dictator who insulted Obama’s predecessor and called for the demise of America.

Democrats watch as President Obama holds their mantle high and stoops to the lowest lows aiming for applause by insulting those among us whom we've deemed Special-Olympians.

At present, Mr. “Obama enjoys a 66% approval rating” according to the Rasmussen poll. That’s significant. But the same poll now finds that the “ruling Democrats are preferred over Republicans on the top issue of the economy by just a three-point margin, 45% to 42%, the closest the two parties have been since well before last November’s election. And that “Republicans have moved further ahead on the issues of national security and taxes and have come on strong on immigration and Social Security”.

That too is significant. Especially since the polls have yet to measure and report public reaction to President Obama’s insensitive comments about Special Olympians; his ‘bow’ to the Saudi Arabia King; and his, perhaps, too-friendly interaction with Venezuela strongman Chavez.

On the Tonight Show, Obama was asked by host Jay Leno:

“Now, are they going to put a basketball -- I imagine the bowling alley has been just burned and closed down”.

THE PRESIDENT: “No, no. I have been practicing all -- (laughter.)

THE PRESIDENT: I bowled a 129. (Laughter and applause.)

THE PRESIDENT: No, listen, I'm making progress on the bowling, yes.

Upon arrival at the Saudi palace, President Obama is seen obviously in a subservient bow to King Abdullah. While the Obama-friendly mainstream media largely ignored it, many Americans saw it for what it was. Obama’s staff denied it, and the next day spun the facts with explanations that the American President is taller and had to shake hands. But, despite the administration “denying that what you saw is what you saw”, the truth remains for all to see because it was caught on tape. Following the White House spin, Oliver North remarked “Perhaps it would be better described as a "curtsy."

The Washington Times called the alleged bow a "shocking display of fealty to a foreign potentate which ran contrary to American tradition of not deferring to royalty.”

"By bending over to show greater respect to Islam, the US president belittled the power and independence of the United States," the paper editorialized. "Such an act is a traditional obeisance befitting a king's subjects, not his peer."

The Weekly Standard's blog added, "American presidents do not bow before foreign dignitaries, whether they are princes, kings, or emperors".

Posturing aside, America’s citizens should remember that, in fact, it is State Department protocol that “United States Presidents bow to no one.”

At the Summit of the Americas, Obama stood for pictures with Venezuela’s Chavez, who in 2006 told the United Nations, “The hegemonic pretensions of the American empire are placing at risk the very survival of the human species. We continue to warn you about this danger.” Pointedly referring to then American President George W. Bush, Chavez, said, “The devil is right at home. The devil, the devil himself, is right in the house. And the devil came here yesterday.”

Ironically, just last month, Chavez called our current President Barack Obama an “ignoramus,” adding “"My, what ignorance; the real obstacle to development in Latin America has been the empire that you today preside over." Mr. Obama’s response is to broadly smile, gregariously grasping Chavez, shaking and bumping hands; then, accepting a book from Chavez about U.S. imperialism.

Yes, it must be a bad dream – with Americans hoping that it’s - just all mixed up.

Because, a pleasant dream - for most of us - would more likely be pleasant comments of admiration for the perseverance of Special Olympian children, a broad smile for the Saudi King, and diplomatic aloofness – if not an outright putdown - for Chavez.

But, there is tape of this bad dream. Each episode recorded.

That’s why more Americans are waking to, and sensing, an apparent nightmare.