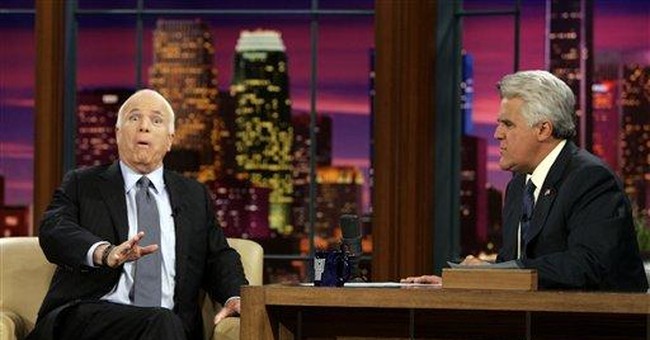 Barack Obama’s selection of veteran Senator Joe Biden is an attempt to plug a very real problem – Obama’s own lack of experience. Conversely, John McCain has much experience, so a younger person with practical experience is needed.

If McCain picks the right person, his VP selection will help to energize the base, win the election, assist McCain to govern effectively; and – we have heard no one include this consideration – develop a solid conservative candidate to head the Republican ticket in 2012 or 2016.

There are several individuals who potentially fit the needed VP profile. Here, we will focus on one person who clearly fits the requirements: Richard John ‘Rick’ Santorum.

Rick Santorum is young, energetic, articulate, and has strong conservative bona-fides. He is engaging, intellectually oriented to vital public policy issues; and, he listens. Also, Santorum, a former Senator from Pennsylvania, is Catholic and pro-life.

These are just a few of the reasons why McCain’s selection of Santorum checkmates Obama, and neutralizes Obama’s political calculations in picking the very liberal Joe Biden.

Here is another reality: Rick Santorum will excite the conservative base nationally, strengthen appeal with Catholics and evangelicals everywhere, and help in Pennsylvania.

Biden’s selection is said to be designed to appeal - in general - to women, blue-collar workers, and Catholics; and, geographically to shore-up Pennsylvania (Delaware essentially being a suburb of the greater Philadelphia area).

That’s precisely what Santorum does for McCain, and social conservatives and the Republican Party.

Is there a downside for McCain if he were to select Rick Santorum? I believe not.

That’s especially so if John McCain thinks strategically, and of the values he has personified over the years.

What will some say or fret about?

Santorum lost his re-election bid to Bob Casey, Jr. That is not a show-stopper.

In fact, selecting Santorum will provide McCain, and conservative Republicans, the opportunity to tell Americans how the abortion-dominated Democrat party would not permit the late Bob Casey, Sr., a former Democrat governor, to speak at prior Democrat conventions because he was pro-life. Further, how Pennsylvania Democrats refused to support the younger Casey in a run for governor. And, how national Democrats, along with Gov. Ed Rendell, seeing that the Casey family’s Catholic religion and pro-life stance could be used in the heavily Democrat state to neutralize Republican Santorum’s Catholic religion and pro-life position intervened.

John McCain’s impressive performance, values-based articulation of his beliefs and issue positions at the Saddleback forum, and his persistence on the stump, has enabled him to catch up in the national polls.

Selecting Rick Santorum as VP will enable McCain to put the focus on Barack Obama, Joe Biden, the abortion supporting Democrat party, and catch the Democrats in their inconsistencies of thought, word, and deed.

This is a leadership decision John McCain can make now.

If he does, McCain will reactivate Reagan-Democrats and win the presidency.

In office, McCain and Santorum would have the opportunity to reignite the conservative revolution, restore American traditions, and enhance respect for the Constitution and the rule of law, while implementing American Values-Based policies to address emerging problems and challenges.

The campaign tells us that the VP announcement will likely come Friday, John McCain’s birthday. Selecting Rick Santorum as his VP may just be the best birthday present John McCain can give himself.