Hate and Division Have No Place in Florida

Rebecca Hagelin
|
Posted: Nov 02, 2018 12:01 AM
Share   Tweet
The opinions expressed by columnists are their own and do not necessarily represent the views of Townhall.com. 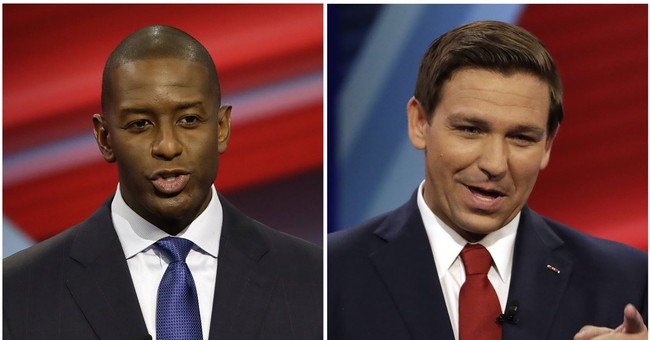 Andrew Gillum, the far-left candidate for governor of Florida who pledged his support to an anti-Semitic, socialist organization, has brought political discourse to a new low.

He’s using the laziest, dirtiest trick in the book in order to sway undecided voters: play the “racist” card. Which is a bit puzzling, considering that Mr. Gillum has allied himself with the Dream Defenders, a radical group that advocates for the destruction of Israel, that glorifies a Palestinian terrorist organization and that calls the United States “the biggest bully in the history of the planet.”

Mr. Gillum, the current mayor of the crime-ridden city of Tallahassee, refuses to discuss his socialist agenda on the campaign trail because he knows that Floridians would reject it en masse. So he relies on attempting to create racial tensions where there are none.

It’s a disgusting play by the George Soros-backed candidate whose policies would bankrupt the Sunshine State, sending it into an economic hurricane from which it might never recover.

Mr. Gillum understands that the patriotic people of Florida reject socialism, so he refuses to give specifics about how he would achieve his lofty campaign promises like free health care and free college. Instead, he uses fear and hatred in an attempt to scare the daylights — and the votes — out of Floridians.

Although Mr. Gillum’s pals Hillary Clinton and Bernie Sanders have always sought to divide Americans by gender, socio-economic status and race, Mr. Gillum has mastered the art of race-baiting. It’s a sad commentary on his assumptions of what people will respond to. But, hey, it’s the socialist way.

Socialism is not just a political philosophy: It’s an attitude of superiority, a quest for unbridled power and the willingness to engage in fear-mongering in order to gain control.

Anyone who studies the history of socialist dictators understands that their schemes to seize power include turning categories of people against each other. Mr. Gillum does so with such ease that it’s actually frightening to watch him in action.

Republican candidate Ron DeSantis is the exact opposite of Mr. Gillum in both style and substance. Mr. DeSantis has spent his life serving and improving the lives of others. As a naval officer, he fought to protect all Americans; as a prosecutor, he was a warrior for justice for people of every race; as a congressman, he worked to advance freedom for people regardless of race, gender or ethnicity.

Ron DeSantis is a true American hero. His policies of economic freedom, environmental restoration, and the protection of every human life will benefit Floridians across the board.

All Andrew Gillum seems to be able to deliver is discord. Currently under investigation by the FBI for corruption, he behaves like a power-hungry career politician who believes he is above the law. As the mayor of a city that was the most violent in all of Florida for the past three years, he has failed in his first duty to those whose safety rests in his hands.

Little-reported is his pledge of support for the radical, anti-Semitic Dream Defenders, which is also hostile to police and calls for the abolition of U.S. borders. The group’s manifesto is so dangerous that last week more than half of Florida’s sheriffs sent a letter to Mr. Gillum calling for him to “immediately and unequivocally withdraw your pledge to the organization, Dream Defenders.

After learning of this organization’s disturbing and anti-law enforcement position and statements, we believe that any candidate wishing to lead our state should in no way be aligned with this radical group.”

As a Floridian, I am ashamed that one of our political parties has chosen such a divisive person as Andrew Gillum as its candidate, and my heart breaks over the bad example he sets for Florida’s children. In the final gubernatorial debate, he even referred to Mr. DeSantis, a veteran of the Iraq war, as a dog.

Is it any wonder why billionaire George Soros (who sponsors anti-American protests around the world and is a convicted felon in France) backs Andrew Gillum? They both are radical socialists who will stop at nothing to divide decent citizens and create unrest in order to take control.

Will the voters of Florida fall for such a hate-monger? If they read his policies and think about the divisive rhetoric Mr. Gillum uses, and then compare that to the pro-freedom policies and record of Mr. DeSantis, they will know that Ron DeSantis must be Florida’s next governor.