Will McConnell Support President Trump’s Efforts to Reduce the Cycle of Crime?

Rebecca Hagelin
|
Posted: Jun 20, 2018 12:01 AM
Share   Tweet
The opinions expressed by columnists are their own and do not necessarily represent the views of Townhall.com. 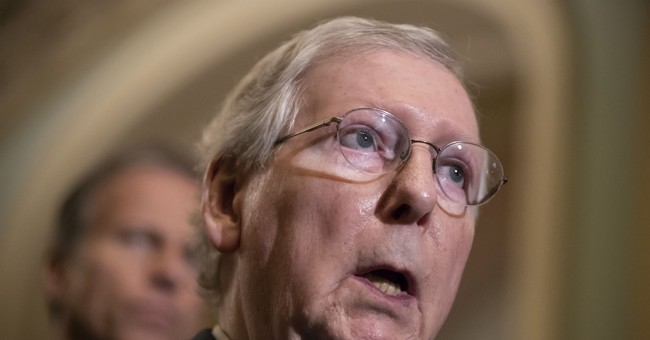 Do you think the United States Senate is sufficiently tough on crime? Are you?

I used to be a “lock ’em up and throw away the key” conservative. After all, criminals deserve what they get. Prison will teach them a lesson.

The cold hard truth is that America’s prisons are largely factories pumping out hardened, hopeless people who are unequipped to succeed on the “outside.” With no preparation for reentry to society, the vast majority of them strike again, and innocent people pay the price.

Here are the facts: 95 percent of the incarcerated one day will complete their sentences and be released into society. As Vice President Mike Pence recently noted at the first White House Summit on Prison Reform: “Every year, while 650,000 people leave America’s prisons, within three years two-thirds of them are arrested again. More than half will be convicted; 40 percent will find themselves back where they started, behind bars. It’s a cycle of criminality. It’s a cycle of failure.”

When we use prisons simply to warehouse and punish people, we lose the opportunity to help them become productive human beings. Upon release, far too many convicts discover that while they were locked up, society, technology and their families moved on without them. With a dearth emotional support, skills and viable income, convicts return to what they know: crime. Merely throwing criminals behind bars ensures there will be future victims.

There is one person at this moment in history who has a chance to reduce this cycle of crime: Sen. Mitch McConnell.

Here’s why: President Trump thinks it’s way past time to take the first step in federal prison reform, so he tasked Jared Kushner with making it happen. Mr. Kushner did what no one else has been able to do: assemble a bipartisan coalition to craft federal prison reform America desperately needs.

The federal First Step Act that Mr. Kushner champions on behalf of Mr. Trump recently sailed through the House in one of the largest bipartisan victories the nation has ever seen. Based on methods that succeed in transforming lives and reducing crime in red and blue states, including measures that Indiana adopted under Mr. Pence’s leadership as governor, the act will help criminals become job-ready.

The legislation now awaits Senate action, and the one person who controls the Senate calendar is Mr. McConnell.

Will Mr. McConnell thwart the president by killing the First Step Act behind closed doors? Or will he allow the Senate to debate the merits of the critical legislation in the open?

Will Mr. McConnell obliterate the bipartisan coalition that the administration worked so hard to create? Or will he work hard to secure this victory on behalf of the American people?

Nearly 30 states have enacted successful prison reform measures, so we now know what works. Yes, there is much about our federal criminal justice system that must be reformed. This First Step is just that — the essential first step. It carves out prison reform from the more controversial elements of sentencing reform — which is why it enjoys broad bipartisan support.

If Mr. McConnell and his Republican friends allow the president to take this first step, the senators then can take the lead on the next steps. But if he kills the bill behind closed doors, federal prisoners will continue to be churned out woefully unprepared to become contributing members of society.

Georgia, Texas, Indiana, New Mexico and dozens of other states have been the incubators for successful prison reform initiatives. In Texas, for example, in just a few years after the 2005 prison reform measures were enacted, the recidivism rate dropped by 20 percent, crime was reduced by 30 percent, and taxpayers saved billions of dollars, partly because eight state prisons could be closed. It would be a social crime of epic proportions not to immediately apply the proven methods to the federal prison system too. (You can read more details about effective prison reform at RightOnCrime.com and TexasPolicy.com.)

The men and women currently in federal prisons will return to society with a better chance at contributing to it or not. There’s no need to “guess” about what works. When prisoners receive skill training, counseling or mental health treatment, recidivism is dramatically reduced.

Why not, in the name of humanity (if not self-interest), don’t we make it a priority, for instance, to treat drug addicts while they are sitting in prison? It’s ungodly and un-American to withhold effective drug rehabilitation and job training from people who one day will return as our neighbors.

Jared Kushner has brilliantly led the bipartisan effort to bring the First Step Act to the door of the U.S. Senate. If we are to reduce crime and save billions of dollars in the process, our senators must focus on the faces of the “forgotten men and women” behind bars. Of this our senators can be sure: The future victims of prisoners released with no treatment, training or hope will never forget the faces of those who wronged them.

Right now, all eyes are on Mr. McConnell.