Rebecca Hagelin
|
Posted: Oct 24, 2016 12:01 AM
Share   Tweet
The opinions expressed by columnists are their own and do not necessarily represent the views of Townhall.com. 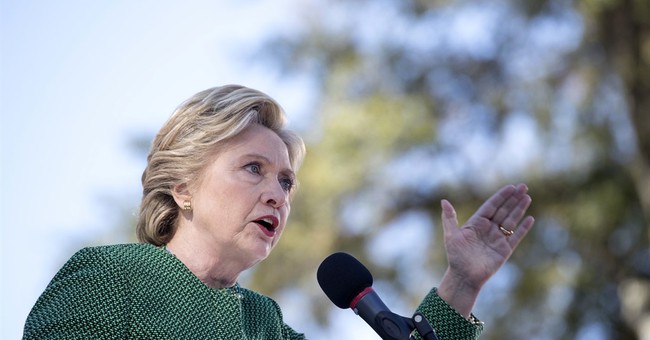 Hillary Clinton touts herself as a tireless advocate for the rights of women, children and families. Her record shows otherwise.

While it is true that the Clinton Foundation and Secretary Clinton have done some good, the stark reality is that recent history reveals that Secretary Clinton is also perfectly willing to throw both women and children under the bus when it is politically expedient to do so.

Consider: Secretary Clinton accepted at least $25 million from oppressive nations like Qatar and Saudi Arabia where the laws and culture allow husbands to beat their wives. Women caught in adultery can be stoned; girls and women are treated like property; females are often denied an education and they can't even enjoy some of the basic conveniences we take for granted, like driving a car. The list of atrocities goes on and on. Yet, Hillary is all smiles and greedy hands when it comes to accepting big bucks from foreign thugs. The fact that Mrs. Clinton eagerly pockets such blood money reveals just how hypocritical and crooked she really is. Cozying up to oppressors of women by a female who held the post of Secretary of State of the United States of America must feel like a stab in the heart to the women suffering under the regimes of Hillary's brutal buddies.

Consider: As a young lawyer eager to climb the professional ladder, Mrs. Clinton was willing to climb that ladder on the back of a 12-year-old girl who was violently raped and beaten. Mrs. Clinton agreed to side with the rapist over the child, and was not only successful in gaining an acquittal for the monster, but is on video laughing about her victory. Some might chalk this up to the fact that as a public defender Mrs. Clinton had to take the cases as they were assigned - but this isn’t so. If Mrs. Clinton really cared about the child, she would have refused the case even if it meant seeking employment elsewhere.  Saying, "I was just following orders," harkens back to the empty excuse used in the aftermath of a very tragic and repugnant time in world history.

Consider: In the final presidential debate, Hillary Clinton actually said she still supports late-term abortions, including the barbaric method known as "partial birth abortion." This, despite the fact that such a procedure is never, ever medically necessary to save the life of the mother as Mrs. Clinton loudly claimed.

Let's be clear about what partial birth abortion is: a full term baby is partially delivered up-side-down, feet first. The squirming baby's head is left just inside the mother, with only the base of the neck showing. The abortionist then takes a pair of scissors, inserts it into the soft tissue at the back of the neck, and slices through the spinal column, severing it from the brain. All the while the "doctor" struggles to hold the now violently moving baby, trying not to drop the child lest the delivery be complete and a bloody, wounded baby fall to the floor. Finally, if the baby isn't dead yet, a suction tube is inserted into the incision and pushed into the skull cavity - literally sucking out the baby's brains.

Such a barbaric procedure is not only never necessary, but incredibly dangerous and cruel to a mother who might be experiencing grave health issues due to pregnancy complications. In the rare instances where a woman's life is in danger in the final months of her pregnancy, it is much safer for doctors to perform a C-Section, which is far less risky to the mom, and preserves the lives of both the mother and the baby.

Given the medical realities, it must be said that the only reason to perform a partial birth abortion is to kill the baby. Period. But Hillary didn't reveal that, did she?  Instead, on the debate stage in front of the entire world, she lied, once again. And, once again, it appears as if she got away with it.

Or did she? Only you and I can make sure that she does not.

So why does Hillary Clinton advocate for partial birth, and other late term abortions which harm women and kill their babies?  Why does she gleefully rejoice in her success at getting the violent rapist of a little girl "off" scot-free? Why does she accept money from nations that terrorize women and children, treating them as something less than human?

She does it because Secretary Clinton, at her core, believes that it is the all-mighty-state that should determine who gets to live and who can be killed.

Hillary Clinton's draconian world-view is also reflected in the health care system that she imagines; a system that says the severely disabled, the very young, and the very old and very ill have less value than the powerful and fit; a system which would leave it up to government officials to decide who has a duty to die.

Hillary Clinton is nothing more than a power-hungry politician, determined to replace individual liberty and the right to life with a system where the government is in absolute control.  She is far more dangerous than Barack Obama because she discovered that she could operate with impunity as a private citizen and as secretary of state - so who will stop her as president?

Donald Trump was not my first choice. But he is now the only choice I have to stop Hillary Clinton.  I don't know which of Trump's campaign promises he will keep, and which he will disregard. But I know for certain where Hillary stands.

Our nation is in a very sad place when our two major presidential candidates have gotten where they are not in spite of, but maybe even because of, their immoral behavior.  In the crass, over-sexualized, pornographic and "me first" culture in which we live, why would we be surprised that both political parties have chosen such people to represent them?

I understand that there may be more accusers coming out against Donald Trump in the days before the election. Those claims must be evaluated, with both sides being heard. But people I personally know and trust, and who are working with Donald Trump nearly every day, stand by him. Some characterize him as sort of like the rude, crude uncle you might find embarrassing, but who you know will boldly defend you against all enemies. Most importantly, they are confident that Mr. Trump will fight for the Constitutional rights for all Americans, and that a Trump presidency will give us back our country. Here is what I know about Hillary Clinton: her actions and policies breed injustice against the helpless and oppressed at home and abroad; and she seeks to grow government, increase regulations, and police nearly every aspect of our lives.

Thank God we live in a Republic that can still be salvaged; a country where we can work to restore our culture so that future presidential candidates will be more deserving to represent the beautiful legacy of the United States of America. In the meantime, every single registered voter has to make a decision. Yes, you can stay home and not vote at all. But in our democratic republic, your non-action is an action because it permits others to choose for you.

Come January, either Donald Trump or Hillary Clinton will be sworn in as your president.  That is reality. One of them believes that governments and their leaders should have the power to decide who is oppressed, and who lives free; which lives matter, and which lives can be snuffed out. Will you give that power Hillary Clinton?