Rebecca Hagelin
|
Posted: Feb 15, 2016 12:01 AM
Share   Tweet
The opinions expressed by columnists are their own and do not necessarily represent the views of Townhall.com. 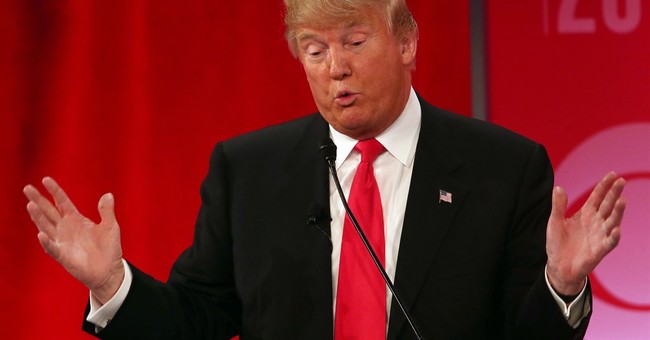 "Liar, liar, pants on fire!" The schoolyard bully that would be president, Donald Trump, now daily reaches such new lows of sophomoric language and behavior that even seasoned political watchers who have "seen it all" are shaking their heads. He's being so childish that it would have been no surprise had he added the "pants on fire" part to his tantrum against Ted Cruz Saturday night.

If the stakes weren't so high, it might be amusing to watch the Donald have his temper tantrums: from the bright red face, to the dagger stares, to the wagging finger and explosive yelling, I half expected Mr. Trump to spontaneously combust during the South Carolina debate. In his attempt to lure Evangelical voters - many of whom are NOT doing their homework - the Donald became irate with Senator Cruz after Cruz exposed Trump as a supporter of Planned Parenthood, the now notorious seller of baby body parts.

Trump, sexist that he is, knows he can't cast Cruz a sexist. Trump, after proudly slurring minorities as a course of habit, knows he can't call Cruz (a Latino) a racist. So, the Donald has  settled on a sordid slur to bludgeon the most honest, trusted candidate in the race: Liar.

It's the oldest trick in the political war-game book: call someone a name equated with disgusting behavior and that becomes the headline. Name-calling has always been the liberal ace-in-the-hole for seducing the drive by media and low information voters (to quote the great Rush Limbaugh). But God help us if conservatives - Christian conservatives - don't wake up and see the "liar" label as the playground slur that it is.

We've seen this before.

Senator Cruz is running on a sterling record of advocacy and achievement of conservative principles. He is one of the few in our lifetime who has done exactly what he said he would do after being elected and sent by the people to take a seat of power in Washington, DC.  From fighting against the unholy alliance of Rubio/Schumer that attempted to grant blanket amnesty to millions of people who have broken American laws and, many of which, are now feeding off the backs of hard-working immigrants and Americans who play by the rules; to challenging the Washington cartel of the "Good Ol' Boys Club" that is the Republican Establishment, Senator Cruz has exhibited both courage and integrity. He fights for truth; he fights for the Constitution, he fights for freedom.

When Establishment GOP types unite with hot heads like Trump in name-calling in order to defeat an honest, fearless man like Senator Cruz it reveals something I wish every Evangelical and conservative would see: Senator Cruz must really be the Ronald Reagan of the new generation. Reagan was hated by the liberals and held in disdain by the party power mongers. But the voters saw through it. The decent men and women who were desperate for limited government, lower taxes, a strong national defense and a country based on the rule of law did their homework. They looked at the principles on which Reagan stood and his record as Governor of California, and they were able to see through the slurs and the name-calling. They showed up at the polls in droves and voted with knowledge and confidence and elected Ronald Reagan in one of the biggest election landslides of all time. Because they did their homework, because they did not buy the ugly labels at face value, they ushered in a new American day and restored our country to its place as "A Shining City on a Hill."

Do your homework. Go behind the name-calling. Look at the records, the history, and consider the maturity of the candidates. You owe no less to freedom and future generations than to study before you cast your vote. When conservatives do their homework and then vote for the tried and true, Ted Cruz will become not only the GOP nominee, but the President of the United States. Freedom, opportunity and civil society will see a new day in America.