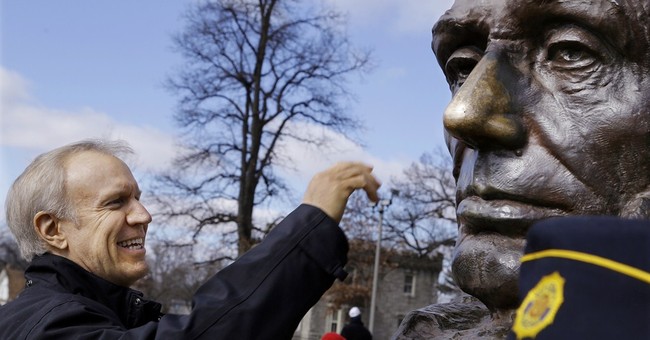 Editor's note: This column was co-authored by Kristin Carey.

This Thursday is Emancipation Day. It’s the 153rd anniversary of the day President Abraham Lincoln signed the Compensated Emancipation Act, which freed the thousands of slaves who lived in Washington, D.C. That day in the midst of the Civil War marked the beginning of a great and dramatic change in our nation, which began with the capital—the heart of our nation—and slowly worked its way throughout the rest of the country.

After President Lincoln signed the Act into law, an author of an editorial in a New York newspaper, The Anglo-African, joyfully wrote, “Henceforth, whatever betide the national, its physical heart is freed from the presence of slavery.” He, like so many others, knew that freedom in the capital meant change in the rest of the nation could not be far off.

Eight months later, President Lincoln issued the Emancipation Proclamation, promising freedom to the slaves held in the rebel states, which would be a lasting freedom if the Union emerged victorious at the end of the war. This promise of freedom, and the proof of it that existed in the capital, sent a shockwave throughout the South strong enough to change the tide and character of the war. Inspired and fueled by the guarantee of freedom, African Americans had great motivation to join the war—to claim their victory for themselves. Those who were given freedom got to, in turn, fight for the freedom of others.

In truth, it wasn’t just African Americans who were enslaved—the entire nation was held captive under the curse of slavery. Such an institution could be truly good for no one. The slave owners, blind and believing their way of life was righteous, were poisoned perhaps more than anyone by its evils. They wielded absolute power over their fellow human beings and most were corrupted by it. So it wasn’t just the slaves who were set free in Washington, D.C. on April 16th, 1862. The entire city stepped closer to the bright light of freedom that day.

Emancipation Day celebrates the beginning of the healing of our nation’s greatest wound and weakness. And as important as it is to remember our nation’s struggle against slavery in this lifetime, perhaps it’s even more important to consider a kind of slavery that has eternal consequences.

The Apostle Paul used the examples of slavery and freedom to illustrate the difference between lives controlled by sin and lives controlled by righteousness. In a letter to the Roman church, he wrote about how we are all born into a system of slavery—a fallen and broken world where sin and evil exist. We quickly find that we are controlled and corrupted by it. He wrote from a deeply personal perspective, saying:

“I’ve spent a long time in sin’s prison. What I don’t understand about myself is that I decide one way, but then I act another, doing things I absolutely despise….if I know the law but still can’t keep it, and if the power of sin within me keeps sabotaging my best intentions, I obviously need help! I realize that I don’t have what it takes. I can will it, but I can’t do it. I decide to do good, but I don’t really do it; I decide not to do bad, but then I do it anyway. My decisions, such as they are, don’t result in actions. Something has gone wrong deep within me and gets the better of me every time” (Romans 7:14-20, MSG).

The Hope: Freedom Through Christ

Jesus himself said, “Everyone who sins is a slave of sin” (John 8:34) and we know from history and our daily lives that all men sin. But in the same way that Lincoln began by freeing the heart of our nation 153 years ago, the Holy Spirit of Jesus begins working freedom into our lives beginning with our hearts when we choose to believe.

Romans 8:15 says, “So you have not received a spirit that makes you fearful slaves. Instead, you received God’s Spirit when he adopted you as his own children.” That Spirit, which takes root in our hearts, then begins working its way through the rest of us, breathing freedom into more areas of our lives as it grows within us.

As the Spirit advances in us, it whispers, “Sin is no longer your master, for you no longer live under the requirements of the law. Instead, you live under the freedom of God’s grace” (Romans 6:14). It does this, and will continue to do this again and again until we find ourselves totally free from our former way of life.

The magnificence of the Holy Spirit’s work in our lives is beautifully portrayed in Romans 8:2 (MSG) “The Spirit of life in Christ, like a strong wind, has magnificently cleared the air, freeing you from a fated lifetime of brutal tyranny at the hands of sin and death.”

As we find freedom from sin through Christ, we must learn to live as free men and women. We are no longer obligated to give into our sinful natures. But just as it was possible for a freed slave to turn around and give up his freedom by becoming a criminal, it is possible for us to fall back into controlling patterns of sin.

“So, since we’re out from under the old tyranny, does that mean we can live any old way we want? Since we’re free in the freedom of God, can we do anything that comes to mind? Hardly. You know well enough from your own experience that there are some acts of so-called freedom that destroy freedom. Offer yourselves to sin, for instance, and it’s your last free act. But offer yourselves to the ways of God and the freedom never quits. All your lives you’ve let sin tell you what to do. But thank God you’ve started listening to a new master, one whose commands set you free to live openly in his freedom!

“I’m using this freedom language because it’s easy to picture. You can readily recall, can’t you, how at one time the more you did just what you felt like doing—not caring about others, not caring about God—the worse your life became and the less freedom you had? And how much different is it now as you live in God’s freedom, your lives healed and expansive in holiness?

“As long as you did what you felt like doing, ignoring God, you didn’t have to bother with right thinking or right living, or right anything for that matter. But do you call that a free life? What did you get out of it? Nothing you’re proud of now. Where did it get you? A dead end.

“But now that you’ve found you don’t have to listen to sin tell you what to do, and have discovered the delight of listening to God telling you, what a surprise! A whole, healed, put-together life right now, with more and more of life on the way! Work hard for sin your whole life and your pension is death. But God’s gift is real life, eternal life, delivered by Jesus, our Master.”

The good news for all mankind is summarized in John 8:36: "If the son sets you free, you are free indeed!"