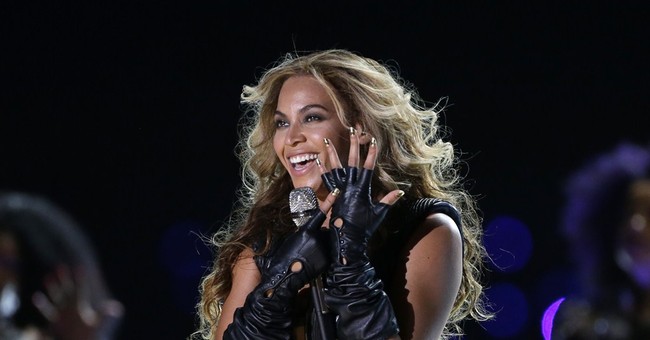 Even if you weren’t one of the 28.2 million Americans watching the 2014 Grammys last month, you probably caught wind of the controversy over Beyoncé’s raunchy performance of her song “Drunk in Love,” featuring her husband Jay-Z. Perhaps it was her lingerie-like outfit or her chair dancing or the part where Jay-Z grasped her rear, but this was one of those moments when parents find themselves putting their hands over their children’s eyes—or flipping to another channel.

Beyoncé, a mother of a 2-year old, raked in tons of media attention for that performance. Some of the publicity was negative. The Daily Mail quoted many parents who expressed their disappointment via Twitter: “It's a sad day when our kids can't even watch the Grammys.” Forbes noted that Beyoncé, a self-claimed feminist, “could have used her power to show that a woman doesn’t need to be a stripper to succeed.”

However, an alarming number of articles defended Beyoncé’s bold risk-taking and showered accolades on her for flaunting her size-2 body. Think Progress even claims that Beyoncé and Jay-Z’s steamy performance is a case for marriage. Think Progress writer Alyssa Rosenburg claims, “[I]f marriage is a product that conservatives desperately want to sell, the smartest thing they could do right now is to hire Beyoncé and Jay-Z as a product spokescouple.”

Claiming that public displays of sexual behavior will promote marriage is ridiculous. Kids aren’t going to watch Beyoncé and Jay-Z and think, “Gee, I can’t wait to get married.” They’re going to go out and try what’s been normalized on live television. Rosenburg, paradoxically, highlights a RAND survey that found “heavy exposure to sexual content on television related strongly to teens’ initiation of intercourse or their progression to more advanced sexual activities (such as “making out” or oral sex) apart from intercourse in the following year.”

Parents face an unfortunate reality: teens drink in this kind of performance not only when it airs the first time, but also when it’s replayed over and over on YouTube or other Internet sites. As a result, parents who carefully monitor their children’s exposure to television’s mature content often find themselves at a loss for ways to protect their children from seeing the very same episodes or shows on the Internet. A child who types “Beyoncé” or “Miley Cyrus” into the search bar gains immediate access to inappropriate TV content—but on the Internet.

How To Save Your Family: Technology and Talk

Fortunately for parents, Internet safety features have moved from the home computer to mobile devices. Mobicip and Net Nanny both offer mobile web filters that give parents the power to keep kids safe. In particular, parents can control access to sites like YouTube, as well as blocking inappropriate searches and websites through new ‘safe browser’ features. Best of all, these tools now offer features such as remote management, multiple devices, and the ability to personalize restrictions for multiple users. Setting up these protections has never been easier.

Net Nanny Social even allows parents to monitor their child’s social media use, including their “friends,” their photos and posts on Facebook, Twitter, Instragam, Pinterest, Tumblr, Google+, and more. From one “dashboard,” parents instantly can see discussions, photos, and new friends—and be in a position to protect their child from harmful bullying or inappropriate messaging.

Parents, don’t be intimidated! Mobile access has changed everything—and the best providers have kept pace not only with technology but also with the changing nature of children’s communications. These new tools are not the old, clunky filters that blocked harmless content while inadvertently allowing some really harmful content. Nor are they time-consuming and difficult to set up. Providers offer step-by-step videos to help parents install protections on their child’s device, and offer ready access to support services. Some cloud-based services, like Net Nanny Social, require only account names and passwords—it couldn’t be simpler.

Of course, monitoring our children’s use of media is one stage of an overall parenting process that aims to help our kids eventually make safe, morally upright decisions about media for themselves. As parents, then, we must form our children’s hearts to desire what’s good (and to avoid immorality) and teach them the practical steps that will protect them—even as adults. How? Talk. And talk some more. Find out what the popular social sites are in your child’s world (Instagram? Snapchat? Gaming sites?) Open conversations about ‘what people say’ online and the drama—and ruined reputations-- that ensue. Hear what your children have to say about their own experiences—positive and negative.

Listen first, and then teach. Most of all, let them know you love them and will be there for them, even if you discover they’ve made some poor decisions.