Culture Challenge of the Week: Obama's Chains and Barricades 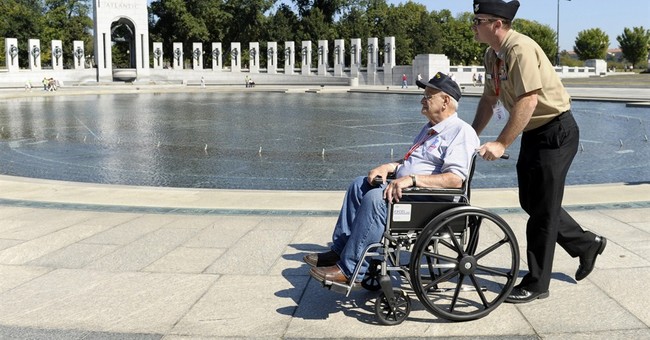 The images made my blood boil.

Last week a group of World War II veterans, now in their 80’s and 90’s, arrived in Washington, D.C. for a long-awaited visit to the World War II memorial honoring their service. They were met with barricades, yellow police tape, and the U.S. Park Police.

By order of the Obama Administration’s Office of Management and Budget (OMB), the Park Police refused their entry, saying the government shutdown required all parks and monuments to close. (Democrats refused to pass a Republican-sponsored bill authorizing funding for the national parks during the budget stalemate.)

It’s a spiteful move. And totally unnecessary. Yet all across the country, the government has barricaded entrances to open-air monuments, citing the shutdown. Wide grassy slopes, open pavilions in front of marble monuments, memorials that have never been blocked off even in the dead of night, are now closed. As Rep. Doc Hastings, a Republican from the state of Washington observed, “These are places without doors or without gates. Yep — the Obama administration is going out of its way to erect barricades and have people manning them in order to keep people out.”

This closure is a cheap political trick designed to ‘stick it’ to the American public, and make the shutdown as ‘painful’ as possible. President Obama prioritizes politics over principle, and has unapologetically slapped our veterans in the face.

These veterans arrived in D.C. as part of an all-expenses-paid “Honor Flight,” a private program that honors World War II veterans for their service, providing a trip to Washington, D.C. to visit their Memorial. Anyone who has ever witnessed the moving arrival of an Honor Flight knows well the significance of these visits. Some veterans get around in wheelchairs; others walk with assistance. All delight in the presence of their peers—a fraternity of soldiers who fought and remember together.

For many, the Honor Flight is the first time in decades that they’ve seen their battle buddies. Few have ever seen the World War II memorial (it was built in 2004 with private funds, ironically).

Last week these heroes faced down the Park Police and showed their mettle. Accompanied by several Congressional Representatives, they tore down the yellow police tape and pushed aside the barriers. Proudly, they “stormed” the barricades, entered, and paid tribute to the memory of their fallen brothers and the bravery of their fellow soldiers.

Interestingly, after their initial refusals, the Park Police stood by and let the veterans enter. One officer expressed his frustration with the Administration’s order, saying, ““I’m not going to enforce the no stopping or standing sign for a group of 90 World War II veterans… I’m a veteran myself.” But after the veterans left, the barricades were wired shut to prevent a repeat entry by other veterans or ordinary Americans.

How to Save Your Family: Demand Accountability

Let’s honor our veterans and demand that the Obama Administration end this charade. Open our memorials. (Yes, they are OUR memorials!) Our veterans don’t deserve to be pawns in the Obama political chess game.

An Honor Flight carrying a group of veterans from Toledo Ohio is due in Washington, D.C. on October 9th. They’ve been told by the Park Police that if they attempt to enter, they will be arrested. The President of Honor Flight Northwest Ohio, Lee Armstrong,

It’s time to stop the Administration’s political games. Push back. Raise your voice in honor of our veterans.

Governor Scott Walker of Wisconsin has the right idea. He ordered his state workers to keep parks and monuments open with state funds. Republicans on the House Oversight and Government Reform Committee, Chairman Darrell Issa, R-Calif., and Rep. John Mica, R-Fla., have upped the political pressure on the Administration, demanding answers from the National Park Service. They want cost accounting of the money spent on closing the memorials and ensuring they stay closed and are requesting relevant documents (such as correspondence relating to the decision to close the monuments) in anticipation of a House investigation.

It’s time for the White House to be accountable to the American people. They can start by showing some respect for our veterans.