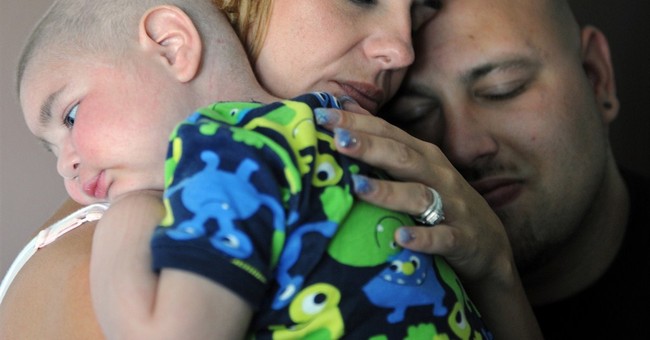 “Wendy” wonders about her dad.

Who is he? Does she look like him or share his personality quirks? Does he want to know her? Will he reject her if she reaches out? After all, he fathered under the assumption that he’d never have to know her.

“Wendy” is a donor-conceived person, the child of an anonymous sperm donor and her mother.

Except that his fifteen minutes of utilitarian, well-paid pleasure produced a real person, one who might long to know him. As one donor-conceived woman wrote, “I often wonder who you are…I often wonder who I am. My family tree is severed in two -- I am denied your half, its branches rich and strong with stories I will never be told.”

The missing “half” causes a great deal of anguish -- a loss our society is only now beginning to appreciate. It’s worth asking the question: Don’t all children have a right to know something about their fathers?

According to the report, “My Daddy’s Name is Donor,” as many as 65% of “donor offspring” feel that “My sperm donor is half of who I am.” Nearly half of all donor-conceived children are “bothered” by the circumstances of their creation and think about it often. The study, which examined the well-being of young adults conceived through sperm donation, reports that these young adults express frequent anxiety over their origins and identity, recoil at the idea that money was involved in their conception, and wonder about relationships with their biological father and unknown half-siblings.

In his article, “Why Sperm Donation is Bad for Dads and Kids,” former Probate and Family Court Judge John Smoot writes that “selling sperm corrupts our society’s concept of fatherhood. Humans should care for their children… What message does it send to children when men so obviously don’t care when, where, or to whom their children are born?”

How to Save Your Family: Reject Anonymous Fatherhood

Because sperm donation has provided children for many infertile women or couples, it is a sensitive topic. However, we cannot ignore the pain it has created. The excellent documentary Anonymous Father’s Day captures the powerful stories of women and men who are the children of sperm donors and makes a compelling case that it’s past time to address this issue.

Children deserve the truth about their origins: they have a right to know something about their biological fathers, even if they cannot know them personally.

Not surprisingly, many children created by anonymous sperm donation hide their feelings. They dread hurting Mom, but they often resent the circumstances of their creation. As one donor-offspring wrote, “I'm ready to talk to my mom about it, which is something I didn't think I would ever do. I was worried about hurting her. Now I realize that until I talk to her about it, I'm only hurting myself…This was her choice, and I'm already suffering enough for it. She should be prepared to deal with the consequences.”

Donor offspring now have a voice. Through websites like Anonymousus.org, which describes itself as “a safety zone for real and honest opinions about reproductive technologies and family fragmentation,” donor-conceived persons, parents, donors, and fertility practitioners can tell their stories.

Sometimes, they also find the information they seek. Mothers, fathers, and children may search for unknown, extended-family members (donor dads, donor moms, half-siblings) though new online registries, such as Donor Sibling Registration, where finding family is as easy as typing in an ID number. One woman searched online for her son’s half-siblings: the children created from the same sperm donor. He had fathered 150 children and “they all look alike” but not one has ever met their biological father. (An MTV docu-drama Generation Cryo chronicles a 17-year old Donor Sibling Registration user.)

Registries, conversations, and openness about the consequences of assisted reproduction technologies can be a first step towards healing a wound long ignored. Consider the experience of a young person I’ll call “Juanita”:

“A few months ago, I was ready to just accept the fact that I’m a donor baby and move on with my life, but now I realize that I’ll never be able to do that. It’s who I am. I’ll never stop wondering. Not just about who my father is, but about all the other people out there like me who will never know the truth. About all my potential half-siblings, scattered across the country. About how many more people this is going to happen to before anonymous donation comes to an end…I have so many questions….I don’t think I’ll ever have all the answers….But that won’t stop me from looking.”