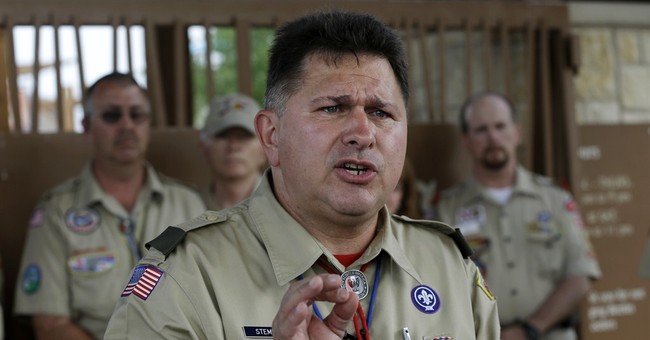 This past week has been pretty devastating for me as a long-time supporter of the Boy Scouts. My own two sons grew up in Scouting, and, with their hard work and encouragement from my wonderful husband who was a Scout Master, they both achieved the rank of Eagle Scout.

I treasure the time our family spent involved in Scouting - and always will. My heart is broken to realize that the finest institution for young men our country has ever known has grown cowardly, and has disappeared into the great vast wasteland that is modern popular culture.

The recent decision by the National Council of the Boy Scouts of America to allow “openly gay” youth to become members of the Boy Scouts was nothing short of a betrayal—a betrayal not only of the values scouting has represented for decades but also of the families whose support for the Scouts has spanned generations.

The roughly 1200 delegates who voted on the proposal represent but a fraction of the Boy Scouts’ membership. Their decision was not motivated by a strong and insistent clamor from their membership to change things. It was brought about by the strong-arm pressure tactics of the homosexual lobby, using the contrived protests of a few members for symbolic effect.

Council members assert the fiction that their decision is not a statement about the morality of homosexuality, but merely a compassionate decision to open wide the doors of scouting to even boys that reject scouting's core values.

The blunt reality is that young boys who “come out” are implicitly, and perhaps explicitly, embracing a whole set of “givens” that conflict with the Scouts’ promise of being morally straight. And the moral standards the scouts proclaim on paper will be drowned out by the homosexual advocacy that comes with being “out.”

Does anyone really think that the homosexual pressure groups are going to stop with the admission of kids who declare their homosexuality? Of course not.

Contrary to public perception, the proposal to admit adult homosexuals into leadership was not voted down, it was simply not voted upon. It’s just been taken off the table for now, in a nod to the incremental approach.

The Scouts have lost any coherence in their original mission and message. It’s worth noting that the law does NOT require the change in Scouts’ policy: the ban on homosexual members was upheld as constitutional by the Supreme Court, which affirmed the right of the Boy Scouts to remain true to their mission and decide, on a principled basis, who may become a member of their group.

How ironic: After years of successful battles to maintain timeless principles, the BSA has fallen by their own hand.

How to Save Your Family: Embrace Courage, not Appeasement

Some argue that the Boy Scouts’ decision was inevitable, a reality-driven move in light of declining corporate contributions (again, because of pressure tactics), shrinking membership numbers, and changing public positions on homosexuality.

Those are weak, unprincipled positions not worthy of the Boy Scouts I knew. Just when our culture needs courageous voices to uphold traditional standards of morality, the Boy Scouts have chosen instead to appease the insatiable demands of homosexual pressure groups. They have decided to teach our children that political expediency matters more than principle.

So what to do?

Scouts and scouting families must search their hearts and find the courage of their convictions to decide if they are going to stay and fight to try and resurrect the BSA - or if it's time to take a hike from scouting for good. No amount of political pressure or million dollar publicity campaigns can change the fact that homosexual behavior is neither "morally straight" nor personally liberating, and we need to continue to make that case whether in or out of the organization.

And all parents should use this sad moment to explain to young people, in particular, that the freedoms we hold dear will not survive if the moral fabric of our country continues to crumble.

As those of us who have left scouting and now mourn the death of the BSA, let's bind up our broken hearts and resolve to continue to honor the many leaders, families and churches who worked so hard over the years to build the character of young men through scouting.

And to all former scouts - especially the Eagles - I urge you to write down your own treasured scouting memories so that you can share with your own kids one day what it was like when the Boy Scouts of America stood for principle and truth.