America Does Not “Need a King”, America Needs a President 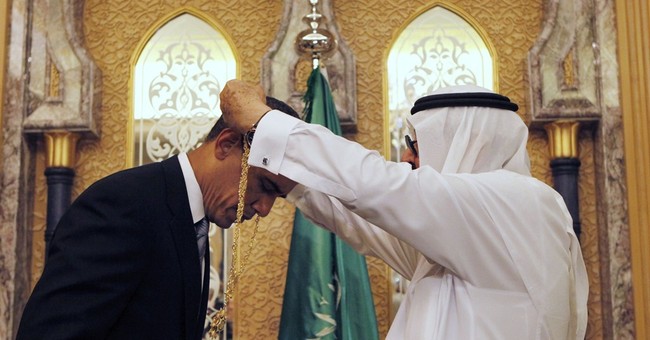 
Like many leaders, George Washington was a powerful man. A great man. A popular man. Ultimately, though, he knew how to do something that so many revolutionary leaders do not. He knew how to relinquish power. He did so twice, both after his leadership of the Continental Army and after his second presidential term, the latter setting a respected standard that remained unbroken until FDR. Both times he had accomplished much, but he felt humbled and worn by his experiences. On both occasions, it was time to abandon power.


Nowadays, no President (not to mention anyone in Washington) is generally praised for pronouncements of abandoning power. As the executive branch, and government generally, has expanded radically in recent decades, it’s hardly surprising that some feel that one executive leader is no longer enough.


Michael Auslin of the American Enterprise Institute recently opined in his piece, “

Auslin seems to suggest that if another individual served to fulfill the ceremonial presidential duties — the ribbon-cutting, the photo-ops, the baby-kissing — then the President would have time to more effectively lead the nation. He laments that America lacks a common meaning, and that Americans crave a unifying leader to save us from self-destructing in our increasingly partisan differences. He proposes that shoving such a figure into the purview of the executive branch, loosely mirroring nations like Russia or France, would cure this passionate partisan divide.


He also justifies the “First Citizen” through increased political animosity in America. Congress is at a staggering 6% approval rating. The judicial branch is increasingly distrusted. It’s no secret that millions loathed President Bush during his time in office, and today’s popular disenchantment with President Obama is increasingly undeniable.


These arguments are plausible. A First Citizen would, indeed, likely be a superficial Band-Aid of fuzzy-feeling unity to slap onto the minds and hearts of America. But at the cost of something much greater, and in furtherance of the underlying problem itself: the systematic addiction to power. We should not collectively cater to the radical aggrandizement of such power, even through symbolic clout, but rather consider the troubling nature of the aggrandizement itself. We must learn, in other words, the power in abandoning power.


At the time of our nation’s founding, the Framers considered instating a monarch-like figure, and the idea was quickly dismissed. Alexander Hamilton himself, once the proponent of the idea, elaborated at length in the Federalist Papers on the danger of anything but a sole executive.


In distinguishing between a president and a monarch, Hamilton wrote in Federalist No. 69: “The one would be amenable to personal punishment and disgrace; the person of the other is sacred and inviolable. The one would have a qualified negative upon the acts of the legislative body; the other has an absolute negative.”


Hamilton continued in Federalist No. 70, in considering a pluralistic executive: “Wherever two or more persons are engaged in any common enterprise or pursuit, there is always danger of difference of opinion . . . If they should unfortunately assail the supreme executive magistracy of a country, consisting of a plurality of persons, they might impede or frustrate the most important measures of the government.”


By placing a First Citizen “above” the President within the executive branch, we would give this branch an even greater sense of mystic inviolability than what it has already gained through government’s self-propelled rapid growth. Instead of a mere “qualified negative” upon other branches of government, the executive would be a new, sacred area to popularize power. We would make the executive untouchable. And as Hamilton noted, we would give the executive a crippling new means of internal conflict, the absence of which has set apart this branch since our nation’s founding. Do we want to reward Washington with another reason to celebrate its perception of self-worth while getting nothing done?


In this dire age practically begging for knowledgeable and committed leaders, a First Citizen would be a glamorous and majestic creation, not the accountable or trustworthy leader America yearns for most. We would worship a magical conception that, while in other nations has a strong historical rooting, serves absolutely no place in our own deeply-rooted constitutional vision. A First Citizen, dividing up what was previously demanded from one person, would teach voters that the integrity of our President is less important than ever before; the First Citizen “above” would somehow be the good guardian of the President’s reputation and capacity to lead. He or she – the inexperienced First Citizen directly chosen by the previous inexperienced First Citizen – would somehow save us, too.


Meanwhile, the President’s power could actually be seen as more important than ever before. The Framers purposefully devised the executive branch with four-year elections and with a high degree of accountability and limited latitude. “Needing” a king ultimately says we want the President to have increased executive authority, through condoning the flippant diversion of at least some presidential obligations to someone else if deemed “less important.” As such, we create the potential for an increasingly divisive and arbitrarily dispersed branch. We send the message that the executive branch is entitled by default to more power, more pomp, and more love by the nation.


Do we want meaningless love or meaningful leadership?


So, what’s a proper President to do?


As the Revolutionary War came to a close, King George III asked American-born painter Benjamin West what George Washington planned to do after winning independence. West replied, “They say he will return to his farm.”


“If he does that,” said the king, “he will be the greatest man in the world.”