Rachel Marsden
|
Posted: Aug 09, 2018 12:01 AM
Share   Tweet
The opinions expressed by columnists are their own and do not necessarily represent the views of Townhall.com. 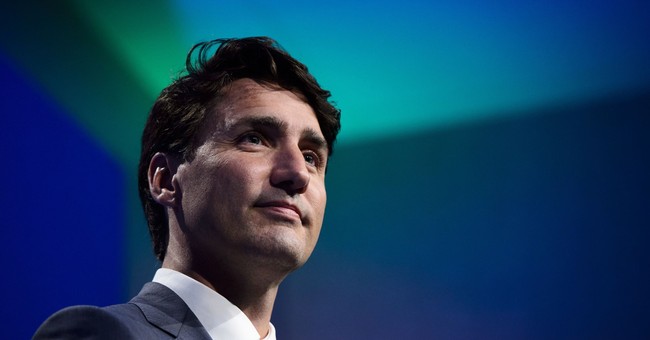 "Canada is gravely concerned about additional arrests of civil society and women's rights activists in #SaudiArabia, including Samar Badawi. We urge the Saudi authorities to immediately release them and all other peaceful #humanrights activists."

Samar Badawi is the sister of Raif Badawi, a Saudi blogger who in 2013 was sentenced to seven years prison and 600 lashes (later increased to 10 years and 1,000 lashes) for "insulting Islam through electronic channels." Samar Badawi, whose sister-in-law (Raif's wife) is a Canadian citizen living in Quebec, was detained in Saudi Arabia last month.

Oh, no. What are the Saudis going to do -- mess with Canadian NHL draft picks?

Canada's original sin wasn't the tweet itself but rather its inability to pick a lane -- boy scout or warlord? When you get into bed with unsavory characters, you can't loudly complain about their horrible habits and not expect to get kicked out of the bed.

Canada knew that the Saudis had a propensity for abusing human rights, sponsoring terrorism and destabilizing the Middle East long before it signed off on a deal that gave Saudi Arabia approximately $11.6 billion worth of armored vehicles built by General Dynamics Land Systems-Canada so that the Saudis could continue to mow down enemies in neighboring Yemen.

Canada had previously given Saudi Arabia a pass while denouncing Iran and Russia for human rights violations based on far less evidence than we have been presented for Saudi atrocities. Why? Because in the Western world it's taboo to criticize our close "ally" in the Middle East.

Canada's foreign policy has become largely indistinguishable from the one designed by U.S. establishment elites. But at least the U.S. and other Western nations handle hypocrisy with more sophistication, letting nations to which America sells weapons save face when they're wrongly detaining and torturing their own citizens. The European Parliament gave Raif Badawi an award for freedom of thought -- then engaged in lukewarm debate about whether EU members should stop selling arms to Saudi Arabia.

U.S. President Donald Trump's silence on the Saudi-Canadian spat has been deafening. Trump has publicly gone all in on Saudi Arabia in the Middle East over the Saudis' main foe, Iran -- despite Iran's recent success in eradicating the Saudi-sponsored Islamic State, which has been responsible for so many attacks against Western citizens.

Trump has deployed son-in-law and White House adviser Jared Kushner to cozy up to the Saudi Crown Prince Mohammed bin Salman in an attempt to broker peace in the Middle East -- which is shaping up to be little more than colluding with Israel and Saudi Arabia to convince the world to put their boots on Iran's neck. Cooperating with an arsonist on the fire that you want to extinguish is an interesting strategy.

A Trump speech last year at the Arab Islamic American Summit in Riyadh revealed his naivete. Trump praised Saudi Arabia for its cooperation and blamed Iran for the jihadist problem that the Saudis, according to former Secretary of State Hillary Clinton's leaked emails, are largely responsible for funding. Presumably, the Saudi purchase of $110 billion worth of U.S.-made weapons that Trump announced in the same speech helped smooth over any glaring hypocrisy.

Trump has fallen into line with other American presidents in cherry-picking human rights issues, only intervening in the domestic affairs of countries that are of little use to American interests. Canadians like to think their government is different because it places values above all else. That's why Canadians tend to elect virtue-signaling prime ministers, such as Justin Trudeau, who never shut up about human rights. But Canada's high horse galloped off a cliff when it followed the U.S. lead in making billions of dollars on weapons sales to the Saudis.

Canada's silence was essentially bought off. Now, Canada wants to have it both ways, mouthing off about human rights while simultaneously hoping that the Saudi checks don't bounce.

This episode should teach the Canadian government and Prime Minister Trudeau what a mistake it was for Canada to blindly follow policy laid out by the Washington establishment instead of forging an independent strategy. Canada should always serve as a check on American foreign policy, not as a mindless follower.