Rachel Marsden
|
Posted: Oct 26, 2016 12:01 AM
Share   Tweet
The opinions expressed by columnists are their own and do not necessarily represent the views of Townhall.com. 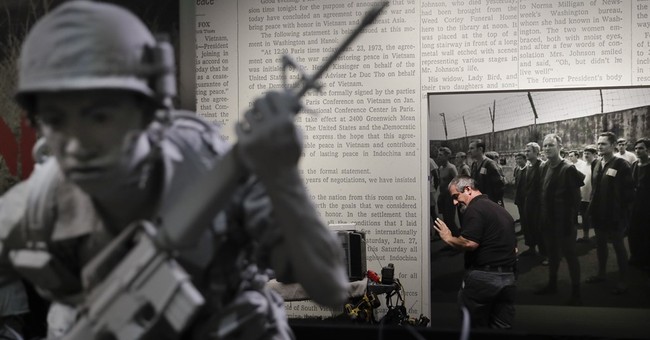 PARIS -- Democratic presidential nominee Hillary Clinton may have opposed the Vietnam War in her youth, but her background should give serious pause to voters seeking to avoid another Vietnam.

Republican presidential nominee Donald Trump wants America out of the Middle East for essentially the same reason that John F. Kennedy wanted America out of Vietnam: In the long run, military intervention is a lost cause.

According to former U.S. Secretary of Defense Robert McNamara's memoir, "In Retrospect: The Tragedy and Lessons of Vietnam," Kennedy had decided on Oct. 2, 1963, the month before he was assassinated, to begin the withdrawal of U.S. forces from Vietnam. Kennedy's exit strategy was effectively buried with him.

"I don't think that unless a greater effort is made by the government to win popular support that the war can be won out there," Kennedy told newsman Walter Cronkite on Sept. 2, 1963. "In the final analysis, it is (Vietnam's) war. They are the ones who have to win it or lose it."

In Syria these days, there aren't many willing fighters left to take on the Islamic State. Most of them have flooded into Europe, thanks to the sort of lax immigration policies favored by Clinton and the world leader she claims to admire most, German Chancellor Angela Merkel.

The Persian Gulf regimes -- Saudi Arabia, Qatar, the United Arab Emirates and Kuwait -- that funded the rebels who ultimately formed the Islamic State have also managed to spare millions of dollars for the Clinton Foundation. These generous donors want Syrian President Bashar al-Assad and his regime to fall.

Would Kennedy have been so keen to get troops out of Vietnam if he had a family foundation that was receiving donations from South Korea, Laos, Thailand and other Asian countries that were supporting South Vietnam?

Donald Trump pinned responsibility for the Islamic State on Clinton during their final presidential debate on Sunday.

Is Clinton is a war hawk? It's an interesting question. Was Kennedy's successor, Lyndon B. Johnson, a war hawk? Well, he wasn't widely considered one, yet the Vietnam War still raged when he left the White House in 1969. The false flag incident in the Gulf of Tonkin took place under LBJ's watch, and it was used to sell an escalation of the war to Congress.

In early August of 1964, the U.S. destroyer Maddox reportedly exchanged fire with North Vietnamese torpedo boats in two separate incidents in the Gulf of Tonkin. Johnson announced the attack in a nationally televised speech and requested authority to launch a counterattack. In 2005, the declassification of National Security Agency documents revealed that intelligence reports about the incident had been distorted. McNamara has said that the second incident never took place.

Clinton is effectively beating the war drums by blaming Russia (the key power backing the Assad regime in Syria) for a series of embarrassing email leaks.

During Sunday's debate, Clinton bristled in response to a question from moderator Chris Wallace about a WikiLeaks revelation that in a speech to a Brazilian bank, she said her "dream is a hemispheric common market with open trade and open borders."

"But you are very clearly quoting from WikiLeaks," Clinton said, "and what's really important about WikiLeaks is that the Russian government has engaged in espionage against Americans. They have hacked American websites, American accounts of private people, of institutions, then they have given that information to WikiLeaks for the purpose of putting it on the internet."

It took more than 40 years to confirm that at least part of the Gulf of Tonkin incident was fabricated. Are you willing to wait 40 years to find out whether things said during a Clinton presidency were meant to rally public support for prolonged military intervention?

It was only after Republican Richard Nixon entered the Oval Office that the Vietnam War ended with the Communists capturing Saigon (now Ho Chi Minh City) and reuniting the country. The Communist Party of Vietnam still rules, but the world has left Vietnam with no other choice but to participate in a global capitalist market, because the Soviet Union no longer exists and Russia isn't communist. Vietnam has become a hub for outsourced consumer technology manufacturing, with the U.S. and China its largest import and export partners, respectively. Vietnam has been brought into the fold through global economics and regional free trade agreements.

This is the sort of result we might see more of with a dealmaker businessman such as Trump handling U.S. foreign policy, rather than someone who has an incentive to prolong an expensive and unnecessary conflict.