Referendums on Immigration are Long Overdue

Rachel Marsden
|
Posted: Apr 27, 2016 12:01 AM
Share   Tweet
The opinions expressed by columnists are their own and do not necessarily represent the views of Townhall.com. 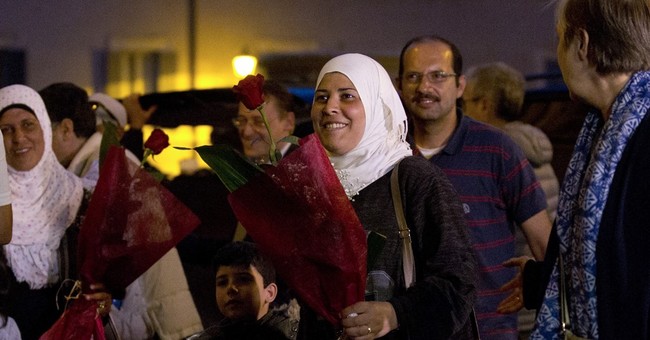 There's a sense among the silent majority in nations around the world that immigration is virtually unstoppable. When people feel hopeless in a democracy, it means that something is broken. One need only look at the demographic petri dish known as France to see immigration-related dysfunction. Nations farther away from the front lines of this demographic tsunami ignore these dynamics at their own peril.

France has seen an increase in protest movements fusing the interests of leftists and frustrated ethnic minorities, with the two groups uniting for a recent series of protests across the country that resulted in violence. France has arguably never been more divided, yet the French government is fostering even more division, whether it realizes it or not.

A recent government advertising campaign intended to discourage racism in the workplace has adorned France with giant posters featuring half-white, half-non-white faces. The text on the posters suggests that the white person is being offered a job opportunity, while the non-white person is being discriminated against by a potential employer.

How could a national ad campaign that demonizes Caucasians be considered a worthy investment in the government's attempt to unify the country? What purpose does it serve other than to rile up up those who might already be frustrated with their lot in life and point them toward potential scapegoats? Rather than discouraging workplace racism, this ill-conceived effort promotes ethnic division at a time when France is facing both an influx of new immigrants and a critical threat from radical Islamic terrorism. Scrap the useless ads and just fix the broken immigration policy already.

The struggle of migrants to assimilate is a demographic time bomb for France and other European nations. A new report from France's National Institute for Demographic Studies indicates that for someone migrating from sub-Saharan Africa to France, it takes an average of six to seven years to get settled -- meaning that they have somewhere to live, a visa, a residence permit and at least a year's worth of employment in their new country. Meanwhile, the average French citizen's welcome mat is wearing out fast: In a recent IFOP survey, 59 percent of respondents said they favor the suppression of the family reunification immigration policy that facilitates chain immigration.

Canada and the United States may be a safe distance from Europe's current immigration deluge, but they nonetheless insist on foisting integration challenges upon their citizens. More than 25,000 Syrian refugees have been resettled in Canada, with some 15,000 of them being sponsored by the government -- meaning they're dependent on taxpayer largesse.

According to media reports, Canadian food banks are seeing huge increases in the number of people they serve, many of them new refugees who use the food banks to supplement the government assistance they already receive. And how can refugees ever be fully integrated if they don't have jobs?

A Citizenship and Immigration Canada report on Syrian refugees published late last year indicated that 70 percent of the refugees are construction workers, yet Statistics Canada figures show a relatively stable construction industry employment rate since 2011 -- not one that has risen in conjunction with the addition of immigrant construction workers. Canadians were told that this labor was critical to Canada's economy. It's time to put an end to the sham.

Rather than being a small part of candidates' platforms, immigration deserves to stand on its own as the subject of national referendums. While it may not be considered the single most important issue in an election, it's arguably the only issue that underpins virtually every other issue. Health care, the economy and, most important, national security are all impacted by immigration policy.

Until there's a democratic vehicle giving citizens a voice on the immigration issue, the view of the governing elites will be shoved down our collective throats, and we'll continue to be told that anything short of compliance is tantamount to intolerance or bigotry.