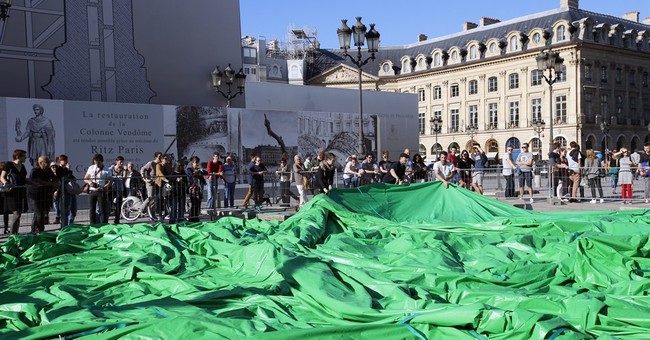 Los Angeles-based artist Paul McCarthy recently made international news by erecting a giant green sex toy in Paris' Place Vendome and calling it "Tree." Before the installation could officially open this week, some Paris residents forced the object's removal by cutting its support ropes. A week earlier, someone slapped McCarthy in the face at an event celebrating the sculpture and then ran off.

It all proved to be a gross miscalculation by the artist about French people and culture.

As a North American native and conservative who has lived in Paris for nearly six years, I've remarked that the biggest stereotypes about the French are that they're culturally suicidal, sexually depraved, antiwar leftists.

French society is complex and far from a monolithic caricature. Former French President Francois Mitterrand famously said: "How can you govern a country with 238 varieties of cheese?" And if you can't compare French citizens to each other, you certainly can't compare them to their elected elites -- and everyone you meet in France who isn't a member of the elite will verify that.

The Socialist mayor of Paris, Anne Hidalgo, and the Socialist minister of culture, Fleur Pellerin, backed McCarthy's right to freedom of expression, but a poll by the French Institute of Public Opinion (IFOP) this month has their approval ratings sitting at 48 percent and 37 percent, respectively. That says it all.

While this "art" might earn a chuckle in the U.S. if it were inflated on Venice Beach, Place Vendome is not in Los Angeles or San Francisco. Imagine if some French citizen were to stick a massive sex toy beside the Vietnam Veterans Memorial. That would be a closer cultural approximation. Place Vendome is home to the Vendome Column, a monument commissioned by Emperor Napoleon Bonaparte to commemorate the defeat of the Holy Roman Empire in the Battle of Austerlitz.

McCarthy, whose previous "art" has included an inflatable "number two" that appeared in Hong Kong and a sculpture depicting former U.S. President George W. Bush engaged in a sex act with pigs, said he figured the French would be more sexually liberated and was surprised by the violent reaction. Apparently he never asked himself: "How might the French view a foreigner placing a giant sex object next to a national monument reflecting their historical military sacrifice and glory?" Instead, in concocting this project, it appears that he went straight to lowest-common-denominator rationale: "The French like sex."

This is what renowned Central Intelligence Agency intelligence analysis veteran Richards Heuer might refer to as the faulty application of general theory over and above specific situational logic. In other words, McCarthy figured that because the French are perceived to be sexually liberal from his point of view, they'd welcome a giant monument with a sexual theme. He failed to take his thinking one step further and consider the consequences of its placement next to a monument of great national significance.

Indeed, the French are sexually liberal, relatively speaking, but they still consider sex to be a highly private matter. The French don't mind public nudity -- which is not the same thing as sex. They will also read about sex scandals out of curiosity. They tend to draw the line at allowing sexual escapades to spill over and hijack more serious matters of public discourse.

In his book "Psychology of Intelligence Analysis," Heuer warns readers to be wary of "mirror images" in rationalizing actions vis-à-vis a culturally different country: "Failure to understand that others perceive their national interests directly from the way we perceive those interests is a constant source of problems in intelligence analysis."

McCarthy failed to consider that the way he and other leftists feel about historical war monuments (and the placement of his "art" in close proximity to one), isn't how most French citizens feel.

Such misconceptions about French society and culture by outsiders extend far beyond this one incident.

The so-called "antiwar" French have been almost constantly at war throughout their history. Ever hear the lyrics to the French national anthem, "La Marseillaise"? It's a violent battle hymn.

Likewise, while the so-called "culturally suicidal" French have had difficulty balancing immigration with integration, they have also struggled with a historical guilt complex over former African colonies whose populations were conscripted to fight for French interests, such as the Algerian Harkis, who fought alongside the French Army in the Algerian War to defeat Algerian nationalists in the mid-20th century. Even now, France owes a debt to the nation of Chad, whose army is playing an essential role in France's ongoing military operation against Islamic extremists in Mali.