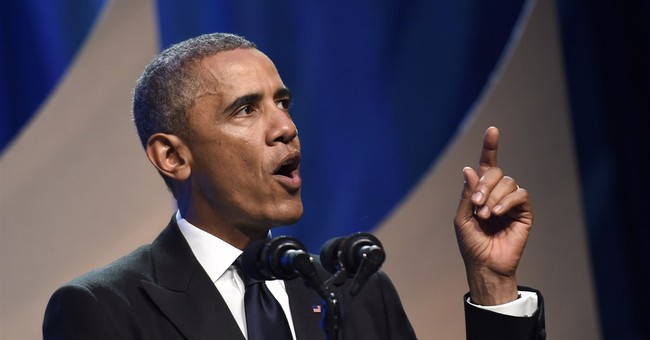 In a nationally televised interview that aired Sunday, U.S. President Barack Obama spoke of his director of national intelligence, James Clapper, the way a manager at a fast-food joint would speak of a grill cook who just botched a burger.

"Our head of the intelligence community, Jim Clapper," Obama said in an interview with "60 Minutes," "has acknowledged that I think they underestimated what had been taking place in Syria."

OK, so now what? Do we get a coupon for a free side of onion rings on our next visit while Clapper is downgraded to deep-fry jockey?

When you're the commander in chief of the United States, downloading blame onto anyone -- let alone someone you nominated yourself -- is just pathetic.

There is no way that Obama can feasibly claim to have underestimated the rise of Islamic extremists in Syria when his administration has spent the past few years arming and training Islamic mercenaries in the region for the explicit purpose of conducting asymmetric warfare against the Syrian government. What did he think was eventually going to happen?

It's one thing to single out Clapper for criticism on national television -- which is bad enough as a deflection of responsibility -- but the president should have at least addressed some of the mitigating factors that go beyond a single person.

Obama has missed nearly 60 percent of his daily intelligence briefings since taking office in 2009, according to a new Government Accountability Institute report. This means one of two things: Either the briefings are so useless that Obama feels he can skip them and just copy someone's notes later, as if he were in college, or he's knowingly missing some good intel and is now trying to blame the professor for a failing grade in Syria 101.

If the White House website is indicative of Obama's top priorities, it's easy to see why he might have overlooked the rise of the Islamic State.

"We must do more to fight Ebola," reads one presidential item. "We have a moral obligation to lead the fight against carbon pollution," explains another. What's the big deal about jihadists in the Middle East when there's a risk of extra plant food (i.e., carbon dioxide) in the air, right?

Obama's possibly misplaced interests and priorities aside, legitimate problems with U.S. intelligence go much deeper than a single scapegoat.

Let's start with the U.S. Embassy in Baghdad. The largest embassy in the entire history of the planet cost $750 million to build and is now located just one hour away from the Islamic State's nearest stronghold. What exactly have the thousands of people working and living in this city-like complex -- complete with Olympic-sized pool, gym and other amenities -- been doing to keep tabs on what's happening elsewhere in Iraq? The place sounds a lot like the sort of Las Vegas resort hotel that offers little incentive to go outside and enter a desert environment.

No doubt there are spies working there under official cover, theoretically tasked with gathering intelligence about potential threats like the Islamic State. But where is the incentive to go cultivate sources and gather intelligence when air conditioning and ergonomic chairs beckon? To be effective, spies need to be outdoor cats, kicking tires and flipping over rocks relentlessly. How much of that was really going on in Iraq? Apparently, not nearly enough to have disrupted the most brutal Islamic extremist network before it overpowered the Iraqi army.

Another problem that seems to endlessly plague the U.S. intelligence community is its own bureaucracy. In the wake of the terrorist attacks of September 11, 2001, there was much debate over the lack of coordination and information-sharing between U.S. intelligence agencies. When the outcome of that discussion resulted in the creation of the director of national intelligence (DNI) position, critics argued that the intelligence agencies (like the National Security Agency, for example) reporting to the Department of Defense instead of to the DNI would result in a blind spot for the DNI -- particularly when the trend is toward a greater reliance on technology over information collected from human sources via more traditional tradecraft.

None of these issues are going to be addressed when a president can't seem to see the forest for the trees -- whether overlooking the rise of the Islamic State, or the glaring problems with the U.S. intelligence system.