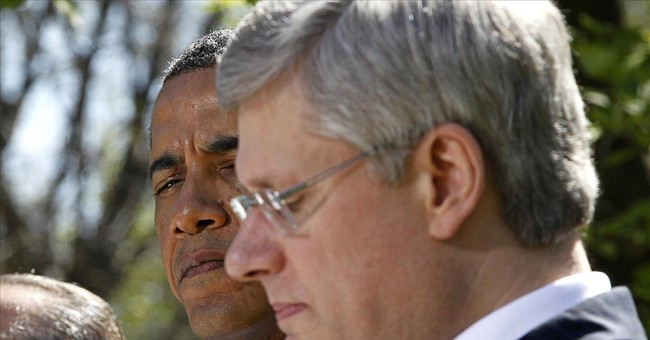 PARIS -- The day after U.S. Secretary of State John Kerry met for Ukraine crisis de-escalation talks in Geneva with his Russian and European counterparts in an attempt to stabilize the country, Kerry's department released a statement that undermined America's own economic and national security -- again.

Disrupting Russia's traditional interests in Ukraine should be nowhere near as important a priority as completing the Keystone XL pipeline in order to cement America's energy independence and its global clout as a net exporter. But apparently, President Obama would rather annoy Russian oligarchs than the American oligarchs who supported his campaign -- namely, billionaires Tom Steyer and Warren Buffett, who have both made bucketloads of cash off Keystone XL alternatives and competitors.

According to last week's State Department release, "Agencies need additional time based on the uncertainty created by the ongoing litigation in the Nebraska Supreme Court which could ultimately affect the pipeline route in that state."

"Agencies" in this case really means "Obama," because we're talking about an executive order here. And spare us the litigation talk. Only two executive orders have ever been overturned by the judicial branch.

Stop stalling with this endless game of hot potato, pull yourself up by that thread of dental floss you call a spine, and make a decision on Keystone already. The release from the State Department even cites as justification Executive Order 13337, which was issued in 2004 by former President George W. Bush with the explicit goal to "expedite reviews of permits as necessary to accelerate the completion of energy production and transmission projects" that cross international boundaries. Expediting only works when the president can be bothered to pick up his pen.

The whole idea of an executive order is to give the president decision-making power over such matters -- particularly given that Congress hadn't gotten around to creating federal regulatory framework for international pipeline projects.

Running around the globe and getting involved in markets largely irrelevant to American interests while relegating America's economic autonomy to the back burner demonstrates misplaced priorities. Wasn't this supposed to be the president who would hunker down at home and focus on resolving America's domestic problems?

The more dependent America is on foreign energy, the more it's compelled to intervene in foreign lands from which resources flow. The Keystone XL pipeline helping to connect Canadian oil sands to American refineries and ports would mean that America would have the luxury of being choosier about foreign missions, freeing up money to address domestic problems. This decrease in economic vulnerability would mean a direct increase in national security.

Further, that kind of control over an oil supply brings a greater ability to export influence. The wars of the future aren't going to be "hot" wars with flying bullets and overt hostilities -- not in an era where people are struggling to put food on the table and therefore have little appetite for nation-building in lands other than their own. The trend is toward "cold" wars driven by economics, with battles fought to maximize economic alliances.

Meanwhile, Canadian Prime Minister Stephen Harper missed a prime opportunity to force the issue. As the first G7 leader to visit post-coup Ukraine (while echoing U.S. State Department talking points), he should have seized the opportunity to very publicly explain Keystone XL's role in the economic and national security of both America and Canada, and he should have demanded that Obama sign the executive order approving Keystone before Harper committed Canada to serve as the de facto international public relations arm of the U.S. government on the issue of Ukraine. This leverage is now gone, and that's a shame.

Keystone XL is about the only pragmatic thing that Canada could have hoped to gain from the Ukraine crisis. Even Russia is scratching its head, wondering what Canada is thinking.

Chevron recently signed a $10 billion deal to exploit Ukraine's natural gas reserves. If those reserves are exported to Europe, then Canada can likely kiss goodbye the chance to export its own reserves into the European market -- likely thwarting a potentially lucrative proposal by Husky Energy to export liquefied natural gas from the Atlantic Coast.

As for crude oil exports, undercutting Russia's market dominance in supplying Europe would first require getting maximum oil down to U.S. Gulf Coast refineries and onto ships. Keystone XL would play an essential role in doing that.

If only Russian President Vladimir Putin could do America and Canada a favor by badmouthing the Keystone XL project so that Obama could take a contrarian position and overcome what appears to be a highly issue-specific case of writer's cramp.