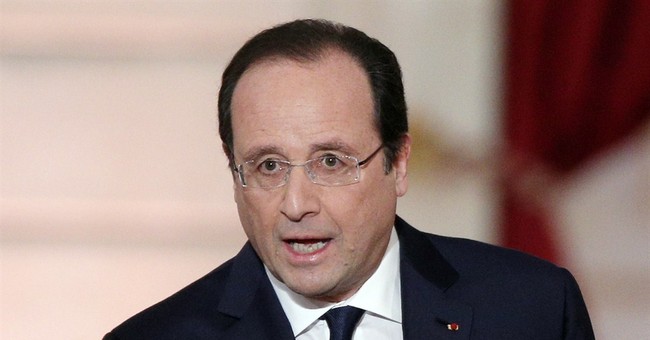 The most disappointing thing about the news that French President Francois Hollande allegedly has been rendezvousing with an actress in the privacy of her apartment is that it's a testament to how pathetic and petty some segments of French society are allowing public discourse to become in a country historically renowned for grand ideas and debate.

You might ask: So the nation that produced scientists such as Pierre and Marie Curie, Louis Pasteur and Jacques Cousteau; artists such as Claude Monet, Charles Baudelaire and MoliÃ¨re; thinkers such as Voltaire and Bastiat; and leaders such as Charles de Gaulle and Napoleon is now fussing over tabloid photos allegedly showing the President of the Republic arriving on a scooter to meet with a woman friend at a flat near the Elysee Palace?

No. Wrong. Thankfully, much of the French public still doesn't care. The media and rival politicians do, and the foreign media does, but a large percentage of the French population has been critical of the media for making this personal matter an item for public discussion.

In the run-up to the president's traditional January press conference this week, the French media speculated about how Hollande would address the alleged affair with French actress Julie Gayet. Really? Far be it from me as a conservative to defend a Socialist president, but the man is busy running military operations in Africa, grappling with post-crisis economic growth and dodging the usual long knives of French politics. Meanwhile, the media spend days breathlessly speculating about how he might handle, in a press conference, the subject of a consensual private relationship between himself and an adult woman? It would have been nice to see Hollande respond with nothing more than a big smile and a thumbs-up. Instead, he said that he would clarify his marital status before his February 11 meeting in Washington with U.S. President Barack Obama. (As if the pettiness could be any better juxtaposed.)

The mainstream French media have been reduced to competing with tabloids and social media for eyeballs. In the "old media" days, newspapers had limited real estate, which meant that when faced with editorial decisions between items related to, say, the French economy and a politician's extramarital affairs, the prurient voyeurism didn't make the cut as actual news. Nowadays, the migration of traditional media to the Internet affords ample space for all sorts of nonsense that doesn't belong outside of coffee klatches. And with the competition for online audience share, one might imagine the kind of iron will required to maintain higher editorial selection standards than the "anything goes" social media cesspool.

Previously, French privacy laws prohibiting the publication of details related to anyone's personal life served as a red line. But in the past few years, simple business math has rendered this deterrent moot. French publications have come to realize that they can set aside some cash for the inevitable legal action -- which Hollande has already threatened in this case -- and still make a profit if enough buzz exists to drive sales.

Opposition politicians are suggesting that Hollande is a hypocrite because he had promised during his campaign to be "irreproachable." Yeah, so? One would hope that even "irreproachable" people have consensual sex. If you're a politician using this as your hammer to bash your rival, then you're the laziest cat in a political jungle that's never short of ripe, low-hanging fruit, and you should relinquish your place at the public trough to someone who can better fake basic competency.

Opposition leader Jean-Francois CopÃ© of the center-right UMP party -- a politician whose ideas and initiatives I've generally supported -- said in a French TV appearance that the situation was "disastrous for the image of the presidential function," and that it's what the international media is talking about in relation to France.

Someone please hand dear Jean-Francois an empty paper bag and tell him to breathe deeply. If the international media is talking about this, and only this, in relation to France, it's because sex and relationship stories touch on an aspect of the universal human experience to which everyone can relate. Someone in Ohio, for example, might not understand why the French president is standing on a tarmac in Bangui unless the Ohio resident has taken a course on Franco-African history, but it won't take much for the same person to understand a series of photos showing two adults going into an apartment and re-emerging the next day. What's absurd is when the media regard the sex and relationship stories as more important than stories about the economy, foreign affairs, corruption and other topics of far greater significance.

It's not as though the international media would be talking about other things related to France if they weren't currently talking about Hollande's private life. I'd be interested to know which French story CopÃ© feels the global media would otherwise be addressing. Maybe he can use his next TV appearance to tell us what that issue that would be, rather than complain about how a rival's affair is hijacking the national agenda.

I hope that all the self-appointed gatekeepers stop with the finger-wagging before they somehow manage to make me feel truly sorry for a Socialist.