Lawyer Indicted on Multiple Felonies? If You’re Connected on the Left, the State Bar Doesn’t Care.

Rachel Alexander
|
Posted: Nov 16, 2020 12:01 AM
Share   Tweet
The opinions expressed by columnists are their own and do not necessarily represent the views of Townhall.com. 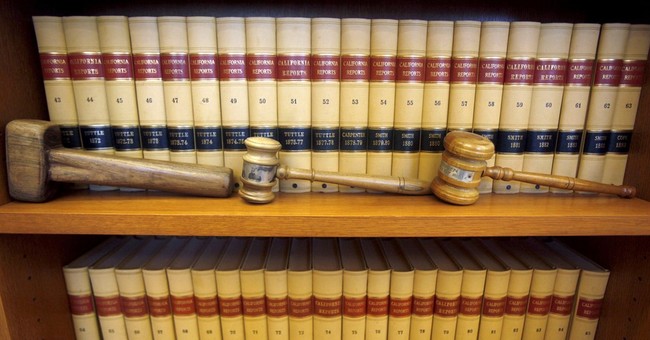 There is a two-tiered standard of justice when it comes to overseeing and disciplining attorneys. This is because state bars are controlled by the left, and the majority of them across the states are mandatory, similar to unions. On the one hand, they frequently disbar conservative attorneys for something that isn’t a crime, that cannot even be prosecuted criminally. On the other hand, they often allow liberal attorneys who are being prosecuted to keep their licenses to practice law. Lawyers around the country are backing out of representing President Trump in his legal battles challenging voter fraud in the presidential election because they know retaliation by the left in the legal arena could be brutal. Two lawyers withdrew immediately last week after being targeted by the misnamed Lincoln Project, which directed its followers to harass them.

A typical example of state bar bias regarding lawyers involves a trial attorney in California, Philip Ganong, who has been indicted on 94 counts of medical fraud involving $22 million. This is clearly not a small accusation. The Ganong family operated multiple businesses, including a medical testing lab and a staffing agency that were used as a "front to overbill insurance companies," Orange County prosecutors said. It probably falls under “body-brokering, a practice plaguing Southern California ”where addiction centers lure substance abusers into treatment and max out their insurance benefits...” The State Bar of California has taken no action against Ganong even though one defendant has already served time in prison and it’s been three and a half years since the felony complaint warrant was filed against Ganong. In fact, he bragged about his good standing with the bar as a defense to the media.

Ganong is well-known for his involvement pushing medical marijuana. He’s in with the right people; a few years ago he was named to the 20th edition of The Best Lawyers in America and to Southern California Super Lawyers — not easy to do if you’re a conservative. Probably because of these he’s been given a free pass by the progressives running the State Bar of California.

According to prosecutors, Ganong and his family ran sober living homes where they fraudulently listed the residents as their employees, unnecessarily billing insurance companies for urine tests. The Ganongs used their health insurance policy to cover more than 100 “employees.” They had the residents take urine tests as often as every day. This doesn’t make sense considering the only drug in the common 10-panel urine drug test that leaves the system after only a day is the short term version of pentobarbital (who takes that?). Other tests they billed insurance for were allegedly never even performed. A detective wrote that Ganong and his wife submitted insurance claims worth more than $1 million for testing on their own urine!

They billed insurance companies between $400 and $2,800 per drug test. Prosecutors say the urine tests were not medically necessary and that the company they used to bill the insurance companies, ironically named Ghostline, billed under codes in which they did not have the equipment or proper certifications for the testing.

One doctor involved in the scheme pled guilty in 2018 and was sentenced to a year in jail. In exchange for the test orders, doctors received a per-patient fee of $200 and 20% of the net insurance proceeds from the billings.

Ganong told the media that he didn’t run the businesses because he’s a lawyer. Well that doesn’t mean anything. I’ve run two non-legal businesses since becoming a lawyer. Ganong, his wife and their son are all named as officers of the Willam Mae Corp., which ran the sober living homes. His preliminary hearing is scheduled for February 11, 2021.

The State Bar of Arizona is one of the most notorious bars for this double standard of justice. That mandatory bar hired a felon who proceeded to sexually assault women and the bar did nothing about it. The bar’s disciplinary judge, William O’Neil, who has his own history of corruption, used the man as an assistant. O’Neil also used a lawyer in a sleazy real estate deal who was later convicted of negligent homicide and fleeing the scene of a 2011 drunk-driving accident. That attorney served 17 months in prison before O’Neil finally yanked his bar license!

In contrast, conservative former Kansas Attorney General Phil Kline, who dared to prosecute Planned Parenthood and its infamous abortionist Dr. George Tiller for performing partial-birth abortions, was disbarred even though no criminal charges were filed against him. As they often do when it comes to conservative attorneys, the attorney discipline board cited vague ethics rules including “a pattern of misleading statements,” “dishonest and selfish motives” and “a failure to take any responsibility for his conduct.”  The “evidence” against him even included an appearance on The O’Reilly Factor!

Many of these kinds of problems could be fixed if state bars were voluntary associations. Currently they function as left-wing controlled unions that mercilessly target conservative lawyers. The California State Legislature ordered the State Bar of California to split off its specialty law sections in 2017 into an independent, non-mandatory nonprofit, but that has not stopped the corruption when it comes to lawyer discipline. The Kansas board that disbarred Kline was not technically a state bar, but an office in the judicial branch. So regardless of technical composition, the left dominates attorney discipline. Research has been done showing that liberal lawyers are more likely than conservative lawyers to become busybodies managing the profession, because they are less likely to have families and churches to occupy their free time.

Most professions don’t require union membership. There is no requirement to become a journalist; no training, no test, no agency membership, nothing. Yet journalism's effects on the public are huge. So why is the legal profession treated like a blue collar trade? One obvious reform would be making the oversight of attorney discipline accountable to the people instead of to state bars and other entities that function like unions (some state bars have a few token nonlawyers on their boards who are powerless). A board elected by the public composed of people unaffiliated with the legal profession would make more sense — like a jury. If the State Bar of California is going to treat Ganong like a jury would, waiting until the jury reaches its verdict, then every other lawyer deserves the same treatment.