Rachel Alexander
|
Posted: Jan 13, 2020 12:01 AM
Share   Tweet
The opinions expressed by columnists are their own and do not necessarily represent the views of Townhall.com. 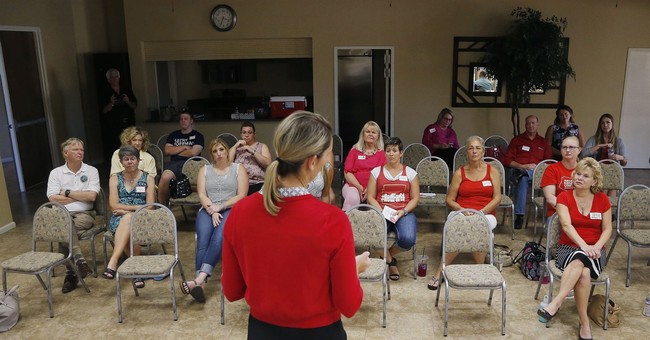 Two school districts in the Phoenix, Arizona area have implemented educational programs promoting racial divisions and social justice. The two programs attack students on the basis of their skin color and other characteristics. Chandler Unified School District passed the equity and inclusion initiative in February 2018. Kyrene School District also implemented it. Word has gotten out on how awful these programs are. On November 8, Fox News host Tucker Carlson aired a piece on one of the two programs, called Deep Equity. Carlson described the teaching this way, “America is based on a hierarchy of various oppressions: men oppress women, Christianity oppresses Islam, English oppresses Spanish, white people oppress everyone.”

There is also the Youth Equity Stewardship, or YES! program. Topics include social justice, “lenses of diversity” and “equality to equity to borderless.” That last one references Nican Tlaca, a term used by proponents of a borderless society in which indigenous peoples rule. One of the lessons is on the “white man’s dollar.” There is a hip hop song entitled Music Voice Message Movement which slams capitalism, “...an economic system that’s flawed from the start. It has no heart.”

Corwin, the vendor behind the programs, states on its website, “This series engages students in a process of understanding their personal journey and social accountability through a critical social justice lens and creating a living example of commitment to diversity, equity and inclusion.” One parent in the Chandler school district observed, “Essentially, students and teachers are being taught anti-white, anti-Christian hate. Students are taught to lecture adults about their biases. They are being taught to be social justice activists.”

The programs also teach “intersectionality.” Michael Rectenwald, a former professor at New York University who now speaks out about the left’s agenda, says intersectionality is merely a replacement for Marxism, and is very similar to it. The Epoch Times explains, “Through the lens of intersectional theory, human history is largely reduced to white Christian men being the ‘oppressors,’ and everybody else being ‘intersected’ by one or more layers of this ‘oppression.’”

Many parents took notice and started urging the school boards to reconsider using Corwin due to its leftist activism. Before winter break, CUSD superintendent Dr. Camille Casteel sent out an email stating that the district was going to cease using Corwin by the end of the semester. However, the school district intends to continue promoting some of the agenda, such as “trans inclusion.”

In that school district, employees are going after parents who complain, and reporting their social media posts in order to get them removed. Purple for Parents is a group that formed in response to the Red for Ed movement. The latter seeks to increase public school funding but also involves students in the effort. Purple for Parents is concerned about fiscal costs and the indoctrination of students. Their members have been actively objecting to the Deep Equity and YES! programs.

One of the Chandler district’s governing board members, Lindsay Love, tweeted a couple of weeks ago, “@splcenter [The Southern Poverty Law Center] should be looking into Purple for Parents as a hate group.” Another post by activists called Purple for Parents a “white supremacist hate group.” Love also tweeted, “I’m glad it happened. Now people can see Purple for Parents real aim. Racism.” This was apparently in response to a parody Twitter account that was created mocking her radicalism.

But Purple for Parents is not a white supremacist group. One of its most active members, Michelle Dillard, is Asian. She has been quite vocal criticizing the programs.

Love tweeted out the name of the employer of critic Scott Weinberg, doxxing him. “This guy Scott is an AHCCCS investigator btws.” The Arizona Health Care Cost Containment System is Arizona’s Medicaid agency. She went on, “There are anger management classes too. Maybe he should consult AHCCCS about that too.” She added, “Just figured I’d share that because he might be stalking and harassing my family and others on AHCCCS time and with AHCCCS resources.” She admitted that she provided people with an organizational chart so they could contact his management. Love continued slamming Weinberg in many more tweets, and tried to get him banned from Twitter.

These radical proponents are also harassing critics at the school board meetings. They want to shut down their opposition so they can ram the programs through.

Chandler has 24 schools, and 17 have scored in the 70s or lower on the AzMerit test. In Kyrene, 22 of its 25 schools have scores that low. AzMerit tests math and English. The founder of the Arizona People’s Lobbyist, Jose Borrajero, asked why we spend so many dollars “implementing culturally responsive teaching practices? What ever happened to the concept that schools should teach material that will enable students to learn what they need to become productive members of society, instead of engaging in social engineering?”

For more information, check out the contentious videos on the Purple for Parents’ YouTube channel.