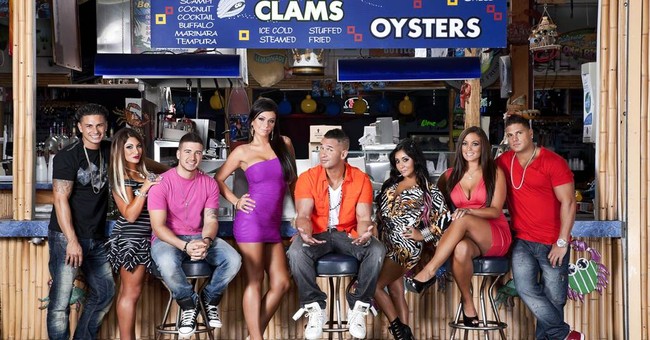 With Duck Dynasty in the news over remarks made by one of its cast members, some conservatives are questioning the very existence of reality TV shows. Say “reality TV” and most people think of The Bachelor or MTV’s Real World. Both of these early reality shows are known for adult language and adult situations that many Americans find inappropriate. Since their debut, there have been plenty more reality shows air that are far worse. Jersey Shore, Bad Girls, and Teen Mom all feature nonstop debauchery and sordid lifestyles. Reality TV isn’t scripted, and participants are usually chosen based on how wild or colorful their behavior is. The very nature of it ensures there will be plenty of risque and offensive scenes.

While a considerable amount of reality TV isn’t any better than The Jerry Springer Show, not all of it is bad. In fact, it has provided a venue to feature conservative values, and has launched the careers of many prominent conservatives. In contrast, today’s scripted television shows continue to lurch to the left, as liberal Hollywood producers and directors decide which scripts are politically correct enough to make the cut.

Dictated more by viewer popularity than directors sitting in their ivory towers, reality TV shows have become a new way for conservatives to get access to Hollywood and compete on the air waves. The conservative reality show Duck Dynasty is carried on A&E, a popular mainstream cable television channel. Duck Dynasty features a Christian family that prays over dinner on air and openly discusses their efforts to behave morally. The family hunts ducks and other game, something the politically correct left doesn’t approve of. The show is the most-watched non-fiction series telecast in cable TV history, even more popular than Jersey Shore at its height.

There are hundreds of reality TV shows now available to watch on network television, cable television, or net streaming on the Roku or Internet. Some channels, like the Outdoor Channel, have too many reality TV shows to list here, all featuring healthy, conservative topics like hunting, shooting and fishing.

Elizabeth Hasselbeck achieved fame on the second Survivor reality TV show, and went on to become a leading voice for conservatives for 10 years on The View. Rachel Campos-Duffy met her husband Sean Duffy on a spin-off of MTV’s Real World, where they’d both done stints. After achieving fame on the show, Sean Duffy became a Republican U.S. Congressman and Campos-Duffy became a prominent conservative spokeswoman.

Since winning the sixth season of American Idol at age 17, Jordin Sparks has used her fame to speak up for evangelical Christian values. A modern version of the show, The Voice, which also features up-and-coming vocal talent, frequently showcases contestants who proudly profess their Christian faith and sing Christian songs. The Voice has given country artist Blake Shelton - and by extension, his wife Miranda Lambert - the opportunity to cross-over into the mainstream where their Christian values are prominently on display. Ironically, Shelton was initially reluctant about reality shows, but now says his favorite reality TV show is Realtree Road Trips, a show about deer hunting.

While reality TV stars are derided for lacking the classical training of traditional actors or musicians, this doesn’t reflect the whole picture. Many actors got to where they’re at based on the “casting couch,” money or connections, not talent. Reality TV provides a way up for those who have talent but lack the resources to become an actor or singer the traditional way. Outspoken conservatives and Christians who would be turned down for Hollywood roles based on their viewpoints are welcomed onto reality TV. When Rachel Campos-Duffy was selected to be on MTV’s Real World, the show blatantly promoted her in trailers as a passionate Republican and Catholic.

Many reality shows are better suited to conservatives and traditional values than a lot of the most popular TV shows today. The late and great conservative Andrew Breitbart made significant inroads into exposing the deception of the left through instantaneous video interactions, arguably a form of reality TV. We should be smart enough to see the opportunity that reality TV can be to help us win the war for the culture.