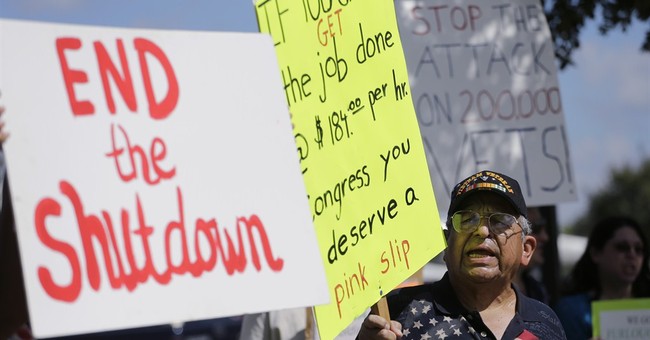 The media is dramatically reporting that the federal government shut down on October 1 - yet hardly anyone has noticed. This is because it is not really a “government shutdown.” If only a few non-essential government functions have been temporarily halted, it is misleading to characterize it as if the entire government has shut down.

Congress came to an impasse on passing a budget last week, which left it up to the Obama administration as the executive branch to pick and choose which federal government programs to temporarily shut down as negotiations continue. Taking a cue from the government shutdowns of 1995-96, Obama knows which parts of government to shut down in order to ensure that Republicans again receive the blame. He’s left in place the parts of government that people really need, like the military, federal prisons, the Post Office, operating the power grid, guarding federal property and mailing out Social Security checks. He’s shut down the parks, museums and national monuments, because that will affect Americans’ vacations. Having their vacations ruined is not enough to really hurt people, but it’s enough to irritate them.

Obama furloughed 800,000 non-essential government employees out of 2.5 million federal civilian employees. He knows this sounds appalling to average Americans, who are struggling to make a living in the Obama economy. Wonder why there hasn’t been a peep from the federal employees’ unions? Obama is well aware that most of the media, which is in the tank for him, will not report that the “furloughs” are nothing more than extra free vacations. After previous government shutdowns, federal employees who were furloughed were retroactively paid. Sure enough, the House passed a bill on October 5 granting retroactive pay for the furloughed employees, which the Senate and Obama are expected to approve.

There have been 17 government shutdowns in the past. Congress has not passed a proper budget on time since 1997. Since then, the same impasse repeats itself when it comes to passing an annual budget. The Democrats always demand more authorization to borrow money, and the Republicans always demand significant budget cuts. Each time after tough negotiations, Congress ends up passing a temporary, stop-gap continuing resolution instead of a full appropriations bill, authorizing a budget for another six months or so.

The Republican-controlled House could not agree with the Democrat-controlled Senate this time over Obamacare. House Republicans wanted to defund Obamacare, and sent three versions of a continuing resolution to the Senate decimating it in various ways. All three were rejected by the Senate due to the anti-Obamacare provisions. The House has voted 42 times in the past on defunding or repealing all or part of Obamacare, with no success.

Including anti-Obamacare provisions in the budget has pitted Republican against Republican, and even conservative Republican against conservative Republican. The GOP is divided over whether including an anti-Obamacare provision was a good strategy, remembering what happened to the GOP in the last government shutdowns of 1995-96. Republicans received the brunt of anger from public opinion, and it destroyed Newt Gingrich’s career as Speaker of the House. Republicans were ultimately forced to back down and compromise. A recent CNN poll found that 51 percent of Americans will blame Republicans if government is shut down.

Conservative and Tea Party House Republicans are leading the effort to keep the anti-Obamacare provisions in the continuing resolutions. One the Senate side, Senator Ted Cruz (R-Texas) filibustered for 21 hours straight railing against Obamacare. But by the time the third variation of the resolution was drafted at the last minute before the impending shutdown on September 30, 12 House Republicans - including 10 or 11 who come from the conservative wing of the party, like Rep. Michele Bachmann (Minn.) - voted with the Democrats against it. Bachmann and Rep. Louie Gohmert (Texas) said they voted against it because the third version did not go far enough in dismantling Obamacare; it would have merely delayed its implementation for a year. Enough Republicans switched their votes to leave the provision out, but so far Speaker Boehner has stood fast against bringing a version of the budget to the floor for a vote that does not include an anti-Obamacare provision.

Conservative Senator Tom Coburn (R-Okla.) opposes the attempt to link the defunding of Obamacare to the budget, saying, “It’s not an achievable strategy. It’s creating the false impression that you can do something when you can’t. And it’s dishonest.” Coburn has a lifetime rating of 97.86 from the American Conservative Union, the highest rating in the Senate. The erudite conservative columnist Thomas Sowell says the strategy is allowing Obama to deflect attention from his scandals back onto the Republicans. Furthermore, he said it can’t be done; even if the House can get the Senate to agree, Obama will veto it. Rich Lowry, the editor of National Review, observed, “The strategy seems tantamount to believing that if Republican politicians clicked their wing tips together and wished it so, President Barack Obama would collapse in a heap and surrender on his party’s most cherished accomplishment.”

Obama views the shutdown as just a game. One senior level Obama administration official gloated, “We are winning.” Obama is cruelly playing with Americans’ emotions in order to beat the Republicans. He shut down veterans’ memorials, requiring World War II veterans to break down barriers in order to see a memorial set up for them. Obama is counting on the cruel, unnecessary shutdown of certain areas of government to anger Americans against Republicans, and not see it as a carefully plotted maneuver by the left.

In another couple of weeks or so, Congress will inevitably come to an agreement and pass a continuing resolution. Congress faces another fiscal crisis on October 17, when it must decide whether to increase the debt ceiling or let the country default on its debt. Maybe we should listen to those conservatives who are saying this is where the real fight is. Sometimes it’s best not to save people from their actions, but let them suffer the full consequences. It might be better to let Obamacare go into effect, and allow people to experience how bad it is on top of the bad economy. Americans will then throw the Democrats out of office and elect Republican members of Congress and a Republican president who can repeal Obamacare without risk of it backfiring on Republicans.