France Closes Its Borders; Why Can’t We? 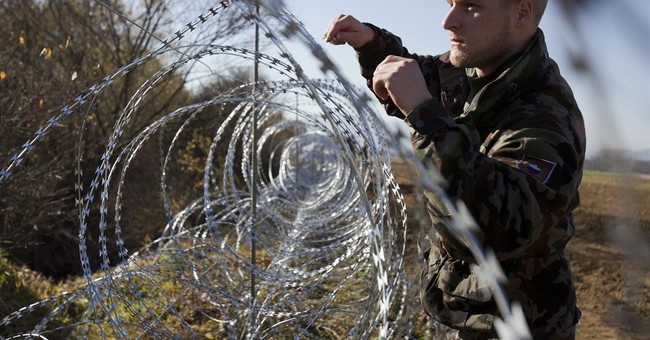 The Friday night massacre of over 100 people at a soccer game, a rock concert, and five restaurants in Paris was apparently committed by 8 men working on behalf of ISIS, also called ISIL or the Islamic State. The day before the attacks, President Obama was on television reassuring George Stephanopoulos that "ISIL continues to shrink in its scope of operations" and that "we have contained them."

Next week, some 20,000 people (including President Obama, John Kerry and 3,000 journalists) are expected in Paris for the UN convention on climate change, which Obama in May called "an urgent and growing threat to our national security, contributing to increased ... refugee flows."

Based on a passport found next to his body, one of the 8 Paris terrorists was Ahmad al-Mohammad, 25, a native of Syria who passed through the Greek Island of Leros on Oct. 3 and crossed from Macedonia into Serbia on Oct. 7. He was part of the huge army of migrants flooding into Europe this year claiming to be refugees from the civil war in Syria.

Shortly after the coordinated attacks, France’s socialist president announced his decision to close the borders of France. "We must ensure that no one enters to commit any crimes, and also that those who have committed crimes can be arrested if they try to leave the country."

Close the border – what a great idea! Unfortunately, France eliminated most border checkpoints as part of Europe’s Schengen agreement, which is how a Syrian so-called refugee got all the way from Serbia to Paris without being stopped.

Some say stricter border controls can’t prevent "homegrown" terrorists such as the Paris perpetrators who were native-born French citizens. But in virtually every case, "homegrown" terrorists are sons of Muslim immigrants who are drawn to their ancestral faith and homeland instead of assimilating to Western values.

For instance, the Tsarnaev brothers, who bombed the Boston Marathon in 2013, grew up in Cambridge, Massachusetts in a family of ethnic Chechens who came here in 2002 as refugees from Dagestan and frequently visited the country they were supposedly escaping from. At least 22 young Somali men who grew up in Minneapolis have left to train or fight with terrorist groups in Africa.

Muhammad Youssef Abdulazeez, who killed four Marines and a sailor at two U.S. military recruiting offices in Chattanooga in July, grew up in a family of Palestinians who came here in 1996 and frequently went back to the Middle East for reasons unknown. On the same day as the Paris massacre, FBI Director Comey told reporters he would not reveal what the FBI had learned about the Chattanooga shooter’s motivations because "We don’t want to smear people."

While the Obama administration pledged to admit 10,000 Syrian refugees in the coming year, Hillary Clinton said in the Democratic debate that "we should increase numbers of refugees; I said we should go to 65,000." Not to be outdone, Senator Dick Durbin (D-IL) has called for 100,000 Syrians to be brought here.

Hillary promised that refugees would be put through "a screening and vetting process," but FBI Director James Comey and National Counterterrorism Center Director Nicholas Rasmussen both testified in October that it is simply not possible to screen them adequately. Speaking cautiously and carefully, Comey said "there are certain gaps in the data available to us" and Rasmussen offered the understatement that "the intelligence picture we have of this particular conflict zone is not as rich as we would like it to be."

When the first Syrian refugees began arriving in New Orleans last week without notice to local officials, Louisiana Governor Bobby Jindal sent President Obama a letter demanding answers about how they were screened and whether they will be monitored. Jindal concluded that in light of the Paris attack, "it would be prudent to pause the process of refugees coming to the United States."

Rep. Brian Babin (R-TX), a freshman member of Congress whose son is a Navy SEAL, recently addressed the House for 45 minutes about refugee resettlement. "I found out that no one was asking – much less answering – the questions of who, how, when, where, and how much regarding these refugees."

Babin continued, "nearly 500,000 new refugees have come into the United States under the Refugee Resettlement program since President Obama first took office." Refugees "have been resettled by private contractors across this country in over 190 towns and communities whose local citizens have little to no say in the matter."

Babin cited numerous examples of refugees or their children who have been found with ties to terrorist organizations or have even traveled overseas to join the fight against America. Although more than 90 percent of recent Middle Eastern refugees are on welfare, Babin noted that "the five wealthiest countries on the Arabian peninsula – Saudi Arabia, United Arab Emirates, Qatar, Kuwait, and Bahrain – have not taken in a single refugee that we know of."

A Quinnipiac poll taken in September found that 58 percent of respondents thought that admitting 10,000 Syrian refugees "would pose a threat to the national security of the United States." Tell your member of Congress to eliminate refugee resettlement from the spending bill that must be passed by Dec. 11.