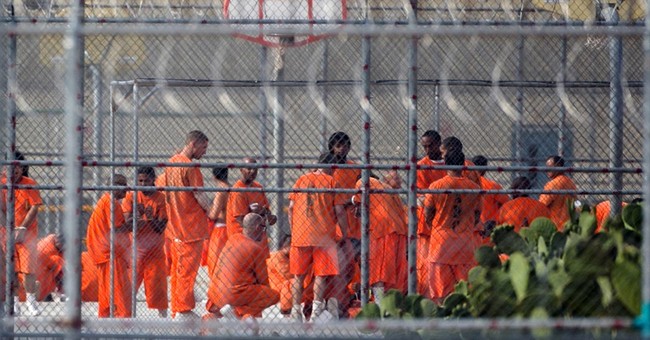 Trending
Many Americans are stocking up on treats for neighborhood children in scary costumes, but you may want to think twice before opening the door to strangers this Halloween. That same weekend, from October 30 to November 2, the Obama administration plans to release 6,000 felons from federal prison.

This is believed to be the largest release of prisoners at one time in American history. I doubt that federal halfway houses have the capacity, or that federal probation officers have the ability to supervise that many prisoners released all at once.

Yet the 6,000 felons are just the first "tranche" of some 46,000 federal prisoners who are now eligible to apply for early release, and 8,550 more of them are expected to be set free over the next 12 months until Halloween of 2016. All these prisoners were convicted of serious drug trafficking offenses, and sentenced to at least 10 years in federal prison.

Even those numbers don't tell the whole story. A bill pending in the Senate -- which has attracted the support of several Republicans who should know better -- would permanently reduce the prison sentences for serious drug trafficking.

There are many things wrong with our criminal justice system, such as federalizing crimes that should be handled at the local level, and criminalizing offenses that don't deserve to be punished with prison time. I have written many columns pointing out examples of unjust criminal punishments, but the sentencing reform bill doesn't address any of those problems.

The sentencing reform bill and the impending prison release are built on the false premise that it's unjust to punish "nonviolent" drug offenses -- as if a drug trafficker's primary offense is the gun he is carrying, rather than the drugs he is delivering.

The answer to that falsehood was given by Carly Fiorina who, in the CNN Republican debate, responded to a question about legalizing drugs with the unanswerable statement: "My husband Frank and I buried a child to drug addiction." I, too, have a dear friend who lost a child to a supposedly "nonviolent" drug offender.

The 6,000 drug traffickers who are being released next week -- and the 8,550 who will be released over the next 12 months -- are not in prison merely for using drugs or possessing a small quantity for their own use. They were convicted of trafficking, transporting or delivering a substantial quantity of dangerously addictive substances, mostly at the behest of the Mexican gangs who control the drug trade in this country. The Obama administration has admitted that wholly one third of the prisoners to be released on Halloween are illegal aliens who never should have been allowed in this country. Officials are saying that those 2,000 criminal aliens will be deported after their release, but there are too many examples of Americans who were killed and maimed by aliens who should have been deported but weren't.

Earlier this year, for example, 21-year-old Grant Ronnebeck was shot to death while working at a Mesa, Arizona convenience store, and a Mexican drug trafficker named Apolinar Altamirano has been charged with that murder. The Mexican was supposed to be deported after pleading guilty to a previous felony, but he was free on $10,000 bond and not under supervision.

When outraged members of Congress demanded an explanation from the Director of Immigration and Customs Enforcement, the ICE director admitted that it's not rare for released criminal aliens to re-offend. In the five fiscal years of 2010 through 2014, some 121 illegal aliens who had previously been released to an unsuspecting public were subsequently charged with "homicide-related offenses."

Although a large fraction of convicted drug traffickers are illegal aliens who should be deported, another large fraction enjoy the benefits of U.S. citizenship while conspiring with Mexican drug gangs. The Washington Post recently profiled 22-year-old California-born drug trafficker named Gerardo Vargas who had a regular job transporting 1 kilogram of heroin in his stomach for the 3,900 mile trip from Uruapan, Mexico to Dayton, Ohio.

Heroin, the most feared drug in history, is now the fastest-growing menace to suburban young people across America, causing thousands of deaths each year. As the Washington Post reports, Mexicans completely dominate and control the heroin trade, with corporate-like efficiency, from field to factory to courier to pusher to user.

This is no time to release 6,000 drug traffickers into our cities, many of which are already coping with a sharp rise in murder rates. And it's no time for Congress to send the wrong message by reducing the punishment for those who deliver dangerous drugs that ruin the lives of our young people.