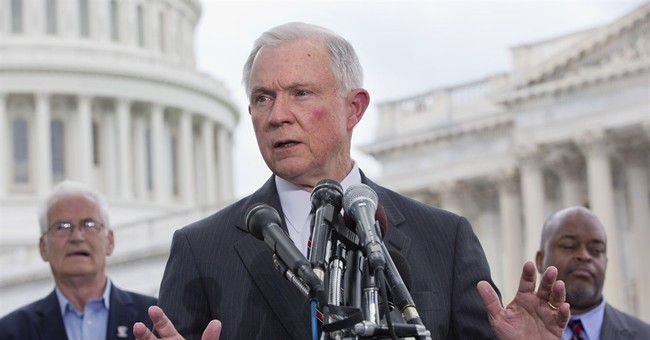 Republicans in 2014 won the biggest majority in Congress they've had since the 1930s, so the grassroots expect them to deliver the fruits of victory. The best guide for action is the "Immigration Handbook for the New Republican Majority" by Sen. Jeff Sessions (R-AL), issued a couple of weeks ago.

Sessions' report asks the fundamental question: "What sense does it make to continue legally importing millions of low-wage workers to fill jobs while sustaining millions of current residents on welfare?" Republicans can't win in 2016 without tapping into that unrepresented American constituency.

President Obama has issued orders granting work permits to five million illegal aliens, along with Social Security, Medicare and free tax credits, all of which take jobs and benefits from struggling Americans. Obama simply ignored or voided existing immigration laws in order to implement his own policies by measures that Congress has repeatedly and explicitly rejected.

Obama knew very well that he was directly opposing the wishes of the big majority of Americans. Polls were unequivocal; more than 3 in 4 voters cited immigration as an important factor in their 2014 vote; they opposed his plans for amnesty and demanded that U.S. workers be given priority for jobs.

Obama admitted several times that only an emperor could issue such edicts. Nevertheless we are now living under imperial decrees that defy the will of the people, the Constitution that Obama swore an oath to obey, and the laws that Congress passed.

Sen. Sessions' Handbook declares emphatically that Congress has the power to stop Obama's amnesty by denying funds for its implementation. The U.S. House has already passed a bill that would do this and forwarded it to the Senate.

There are many other bills that Congress should pass to checkmate Obama's imperial, unauthorized and illegal actions to give preference to illegal aliens rather than to American citizens regarding jobs and taxpayer-paid benefits.

Here are a few examples of laws Congress should immediately pass: Require all employers to use E-Verify, end catch-and-release, enforce mandatory repatriation for unaccompanied alien minors (instead of loading them into our public schools), end asylum forgeries (remember: the Boston bombers were dishonest asylum seekers, yet were admitted and given welfare handouts), and stop giving generous welfare to illegal aliens. Any immigration "reform" that fails to include these elements will create a slush fund for the Obama administration to resettle illegals throughout the U.S.

Obama's attitude toward immigration was summed up by his former Immigration and Customs Enforcement Director John Sandweg: "If you're a run-of-the-mill immigrant here illegally, your odds of getting deported are close to zero." Sen. Session commented, "anyone in the world who manages to get into the interior of the United States -- by any means, including overstaying a visa -- is free to live, work and claim benefits in the United States at American expense."

Meanwhile, two more states have joined the coalition of states (now totaling 26) that are suing over Obama's executive actions on immigration. This lawsuit was filed by Greg Abbott, then-Texas attorney general and now governor of Texas.

The Sessions Handbook quotes U.S. Citizenship and Immigration Services union president Kenneth Palinkas as warning us: "The 9/11 hijackers got into the U.S. on visas and now, 13 years later, we have around 5 million immigrants in the United States who overstayed their visas, many from high-risk regions in the Middle East." Congress should protect Americans from some of these problems by suspending visas to countries with high overstay rates or those that won't accept back their own criminals.

The Sessions Handbook makes another scary point that is not generally known. "Each year, the U.S. admits one million largely lesser-skilled permanent immigrants to the United States, who receive green cards, lifetime work authorization, all federal benefits, access to most federal welfare and the ability to apply for citizenship and vote."

And here's the kicker. "From 2000 to 2014, when 14 million new permanent legal immigrants were admitted to the U.S. in addition to the illegal immigration flow, all net employment gains went to immigrant workers. The total number of working-age U.S.-born Americans without jobs now stands at 58 million."

Sen. Sessions' Handbook ends with a couple of important questions: "Should American immigration laws serve the just interests of our country and our citizens? And do those citizens have the right to expect and demand that the laws passed by their elected representatives be enforced? If we believe the answers to these questions are yes, then we have no choice but to fight, and to win."