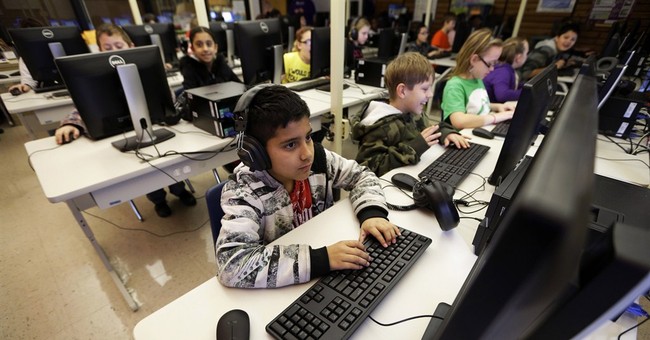 Americans are waking up to how bad Common Core really is for education, but its nightmare does not go away quickly. Liberal education bureaucrats ("educrats") are now trying to enforce Common Core through the courts, with one lawsuit already filed in Oklahoma and another likely in Louisiana.

In both states the governors tried to get rid of Common Core, but parents are shocked that it may return by court order as unelected educrats claim they have more power than the state legislature and governor combined. The Oklahoma legislature approved a law to repeal Common Core, and the governor signed it, but now its state board of education has filed a lawsuit to bring it back.

The Washington Post has revealed how Bill Gates used his nonprofit foundation to spend hundreds of millions of dollars behind the scenes to force this disaster on the American people. The Gates Foundation doled out a fortune to various education groups, to the U.S. Chamber of Commerce and to teachers unions to force Common Core on all students.

A group that received nearly $2 million from the Gates Foundation to help implement Common Core, the National Association of State Boards of Education, is the same organization behind the lawsuit to reinstate Common Core in Oklahoma. Joining this effort is a member of the state board of education, which is not elected by the people.

The NASBE is a private group that received $1,077,960 from the Gates Foundation in 2011 "to build the capacity of State Boards of Education to better position them to achieve full implementation of the Common Core standards." It is unaccountable to the public. About two years later the NASBE received another $800,000 "to provide training and information to implement Common Core State Standards" and to help develop it, too.

The lawsuit, which claims that the state constitution does not permit the legislature and governor to repeal Common Core, was filed directly in the Oklahoma Supreme Court, and there will be no appeal to whatever that court decides. The people of Oklahoma are apparently at the mercy of an unelected state board and its liberal state supreme court, and the U.S. Supreme Court will not get involved in this issue of state law.

Oklahoma Gov. Mary Fallin signed the bill to repeal Common Core a few weeks before her primary, which she then won in a landslide. But why isn't she or the legislature doing anything to remove from office the members of the state board of education who refuse to implement the repeal of Common Core?

A similar fiasco is shaping up in Louisiana, where Gov. Bobby Jindal has courageously stopped Common Core. Or, at least, so everyone thought, until the educrats there began planning a lawsuit to defy the governor and impose it anyway.

The Louisiana State Board of Elementary and Secondary Education voted 6-3 to "lawyer up," as Breitbart.com put it, in order to sue its own governor for withdrawing Louisiana from both Common Core and the Partnership for Assessment of Readiness for College and Careers, which controls the testing to implement Common Core.

Jindal pointed out that the state board did not seek competitive bids on the expensive tests for the schools, as is generally required by state law on most contracts in order to save the state as much money as possible. Both the Louisiana state superintendent and the president of its state board of education defiantly predicted that Louisiana would remain in Common Core and its testing for the 2014-15 school year.

The Obama administration has reportedly already poured $370 million into developing tests to be forced on the states. But many of the biggest states, including heavily Democratic states such as New York, are reconsidering their participation in the federally funded tests.

New Jersey is now considering pulling out of Common Core, with Gov. Chris Christie facing a dilemma that may determine whether he is a viable presidential candidate. Does he stand up for local control over education by stopping Common Core in his state, as Jindal has done in Louisiana, or does he try to play both sides of the issue?

Meanwhile, parents in areas already implementing Common Core are discovering that they are unable to help their children solve elementary arithmetic problems. Bizarre, tedious and convoluted methods of teaching children basic arithmetic are causing parents to search the Internet for answers, and some of these parents are turning to home schooling to escape the madness.

But even home schooling may not help, if colleges all convert to the new testing standards based on Common Core guidelines. The tests are what drive curricula, and home-school curricula will need to adapt to the new tests in order for the students to be admitted to college.