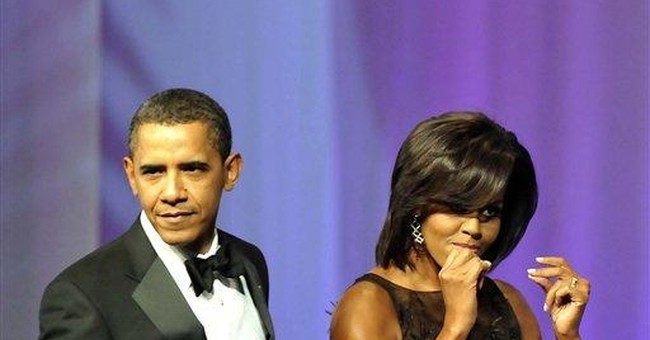 Red alert to parents: If you send your children to a public school, they may be secretly indoctrinated in the cult of Obama-worship. If that's not your plan for your children, you had better act now, before it's too late.

We now know that the "I pledge" video shown in Utah in August, and only afterward discovered by parents, was not isolated evidence of indoctrination of public schoolchildren in the new cult of Obama-worship. Second-graders in New Jersey were taught to sing songs of praise and fidelity to Barack Obama in February and again in June, and parents only found out about it this September.

Public schoolchildren are now forbidden to sing Christmas carols that mention the real meaning of Christmas (only songs like "Rudolph the Red-Nosed Reindeer" are allowed), but in New Jersey, second-graders were taught to sing the spiritual "Jesus Loves the Little Children" in which Jesus' name was replaced with Obama's. They sang, "He said red, yellow, black or white/All are equal in his sight/Barack Hussein Obama."

Before Obama's election, it was considered a political no-no for Republicans to use his middle name. Beginning with his inauguration in January, he and his followers use Hussein to glorify his Muslim heritage and connections.

The revised lyrics teach the kids that Obama will "make this country strong again." The lyrics promote Obama's Lilly Ledbetter law by including the line: "He said we must be fair today/Equal work means equal pay."

Proving that this rewritten Jesus-song wasn't an aberration, New Jersey second-graders were taught to sing a second Obama-personality-cult song to the tune of the Battle Hymn of the Republic. Here are some of the lyrics: "Mr. President we honor you today!/For all your great accomplishments, we all doth say 'hooray.'/Hooray, Mr. President! You're number one!/Hooray Mr. President, we're really proud of you!/So continue, Mr. President, we know you'll do the trick/So here's a hearty hip hooray, hip, hip hooray!"

These songs were not spontaneous kiddie exuberance or extracurricular playground activity. The video makes clear that the teacher was methodically instructing the children, using one talented second-grader to demonstrate exactly how to sing the songs, and coaching students who forgot the words.

The teacher also led the children in giving a sort of Heil Obama salute. On cue, they outstretched their right hands, accentuating their community of action in praising Obama.

The New Jersey songs were first taught to the children at B. Bernice Young Elementary School in February to celebrate Black History Month, and then videotaped in June as part of a Father's Day tribute to Barack Obama. Only after the video was later posted on the Internet did parents learn about it.

Who's responsible for this outrage? The teacher has retired with full pension and benefits, and the principal, Dr. Denise King, defended the controversial song, making no apologies.

Parents quoted the principal as saying she would allow the performance again if she could. King touted her trip to Obama's inauguration in the school yearbook along with Obama campaign slogans and pictures she took in Washington on Jan. 20, and she has posted pictures of Obama in the school's hallways.

Superintendent Christopher Manno issued a written statement that the taping and its distribution were unauthorized, but failed to say whether the singing lesson was approved. State Education Commissioner Lucille Davy directed the superintendent to review this matter but declined to say what the review will cover or if any action would be taken.

Some shocked comments from parents included: "I can't believe it's our school. We don't want to praise this guy like he's a god or an idol or a king." "I felt this was reminiscent of 1930s Germany, and the indoctrination of children to worship their leader."

RNC Chair Michael Steele said: "This is the type of propaganda you would see in Stalin's Russia or Kim Jong Il's North Korea." A poster for the book "I Am Barack Obama" by activist Charisse Carney-Nunes can be seen near the chanting second-graders.

The songs' lyrics sound like a follow-up of the "I pledge" video shown in Utah in which kids were invited to pledge to support all sorts of left-wing goals, such as national health care. Specific legislative pledges culminated in pledges "to be a servant to our president" and "to be of service to Barack Obama."

The New Jersey songs are further proof of Obama's plan to indoctrinate schoolchildren, which was evident in Education Secretary Arne Duncan's instructions to all school principals to use the "historic moment" of Obama's Sept. 8 speech to all schoolchildren as a tool to "inspire" them and teach them to be cheerleaders for Obama.