Phelim McAleer
|
Posted: Jul 23, 2018 2:43 PM
Share   Tweet
The opinions expressed by columnists are their own and do not necessarily represent the views of Townhall.com. 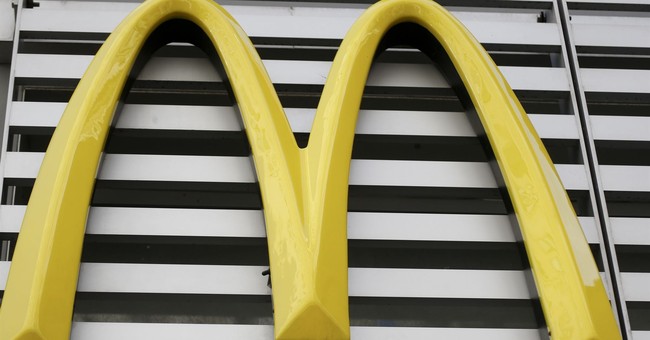 Documentary filmmaker Morgan Spurlock first shot to national attention with his 2004 film Super Size Me. He ate nothing but McDonald’s food and chronicled his ill health during that time. Spurlock and his film became a cultural phenomenon. He received the Best Director award at Sundance and was nominated for an Academy award.

But what if McDonald’s wasn’t the real problem with his health?

Each day during his month-long experiment, he ate all his meals only at McDonald’s, and he ate large servings by any restaurant’s standards. No one forced him. By the experiment’s end, he reported experiencing shakes (as in trembling, not milkshakes) and fatigue. Most disturbingly, he appeared to be suffering liver damage.

Crucially, though, Spurlock claimed he had previously been in good health. That was what purportedly made him a good test subject, and he would go on to spin a whole career out of this self-experimentation routine, particularly in his TV series 30 Days in which, among other stunts, he spent (almost) 30 days in a Henrico, Virginia jail.

Maybe that’s exactly where Spurlock belongs, since he recently wrote a confession on Facebook to numerous incidents of sexual harassment.  But that’s not what invalidates his Super Size Me experiment -- we’ll get back to that in a moment.

In a December 2017 post called “I Am Part of the Problem” Spurlock details a lifetime of self-described sexual misdeeds ranging from a consensual sexual encounter that escalated until a reluctant woman decided it had become rape to a series of harassing acts, including ones directed at coworkers, leading to a number of settlement payments, which Spurlock saw as necessary to maintain his reputation. He also confessed to “being unfaithful to every wife and girlfriend I have ever had.”

YouTube immediately dropped their plans to screen his Super Size Me sequel because of the admissions of sexual misbehavior. Overlooked in his “ confession,” however, is a stunning admission that calls into question the veracity of the original Super Size Me and demolishes his claims about the harms of a McDonald's diet.

Spurlock asks whether childhood emotional upheaval including conflict between his parents influenced his later bad attitude toward women, then adds: “Or is it because I’ve consistently been drinking since the age of 13? I haven’t been sober for more than a week in 30 years, something our society doesn’t shun or condemn but which only served to fill the emotional hole inside me and the daily depression I coped with.”

Not sober for a week since age 13? Spurlock deserves our pity, and it is admirable that he vows to make big changes in his life -- but we must ask: what impact might two decades (at the time Super Size Me came out) of constant drinking have had on his weight and overall health, particularly on his famous liver?

Also, those headaches and shakes sound like classic withdrawal symptoms to me. (I'm Irish I have some experience with alcohol withdrawal).

Might he have made a genuine effort to stay off alcohol during the one-month food experiment, not realizing how much damage he had already done to himself? As his confession of repeated misbehavior suggests, alcoholics are rarely completely honest with those around them or with themselves. Has he been fully honest with his audiences? Was he honest about the risks or benefits of eating McDonald’s food?

Whatever exactly did the damage to his liver, he certainly had a very damaging effect on a fast food industry that supplies millions of jobs to minorities and affordable food to millions of customers. He needs to answer a few obvious questions now, as the next step in his laudable self-improvement plan:

In his Facebook “confession” Spurlock says he has not been sober for more than a week in 30 years. If so doesn't this mean he was lying about his diet during Super Size Me?

Did he continue to drink during the 30 days of Super Size Me?

Had he ever been treated before for damaging health effects of drinking constantly since age13 and before his McDonald's diet?

What was his full medical history before Super Size Me?

Does he think it was OK to hide his alcohol abuse from the audience?

Will he now make his medical records public? Through a publicist Spurlock declined to comment for this piece.

Journalists should have asked these questions -- and asked for verification of his claims to be in good health -- back when Super Size Me came out. Instead, we got supportive headlines like the New York Times’ “You Want Liver Failure with That?” Without a needed dose of healthy skepticism, the public, dazzled by Spurlock’s stunt and left in the dark by journalists, moved away from fast food and have kept moving.

Spurlock has recently emerged from rehab (yes it was a 30 day stint) looking to continue his journalistic career and is suing a TV company because they cancelled a documentary series and want their money back.

Maybe he will no longer disrespect women and abuse alcohol but everything he does from now on should be treated with extreme skepticism until he gives a full account of his journalistic transgressions.

Phelim McAleer is a journalist and film producer. His new film Gosnell: The Trial of America's Biggest Serial Killer will be released nationwide on October 12th. www.GosnellMovie.com

The Day the Electricity Died
Townhall
'Proud liberal Dem' blue check takes the L on AOC vs. Elon Musk poll that was intended to show 'how ridiculous the right's phony polls are'
Twitchy
Tone-Deaf Meghan Markle Sparks Outrage With ‘Surprise’ Uvalde Visit
Redstate
Why the Heck Did Amber Heard's Legal Team Call Her Back to the Stand?
PJ Media