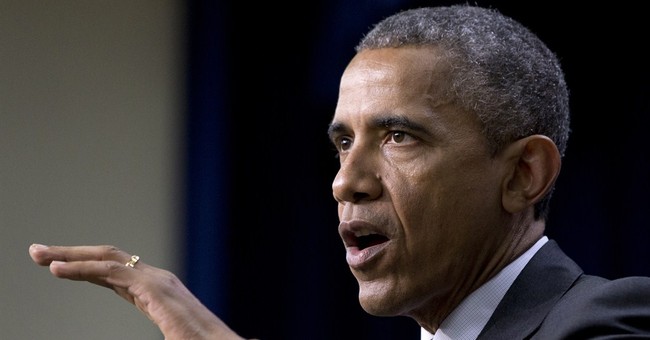 President Obama has proclaimed Hillary Clinton an effective Secretary of State. All along, it must have been the plan for Russia to seize the eastern Ukraine, Beijing to build airstrips and assert sovereignty over international shipping lanes in the South China Sea, and Iran to have nuclear weapons capabilities.

It’s not wholly fair to contrast this performance with Reagan/elder-Bush era successes—the collapse of the Soviet Union and China’s embrace of western capitalism. And a U.S. economy, which also endured a financial crisis, but still accomplished 3.1 percent annual growth.

Those were simpler times. Russia and China were much weaker and desperate for western technology to modernize. The Middle East was governed by regimes with firmer control of their borders and internal security.

More importantly, the global economy was governed by rules largely defined by U.S. dominated organizations, such as those that merged to become the World Trade Organization.

American conventional military power was nearly absolute. Like it or not, the biggest gunboat can resolve disputes to its owner’s satisfaction with much more certainty than the writ of international law.

Clinton facilitated China’s entry into the WTO, and the younger Bush and Obama stood idle while it cheated on its obligations—notably, by purposefully undervaluing the Chinese yuan, requiring American companies to manufacture in China to access its markets, and thereby amassing huge bilateral trade surpluses that has gutted American manufacturing.

Russia sold oil and gas to Europe, modernized its military and co-opted the Germans. Now Berlin simply won’t forgo the Russian market to support the Ukraine, and has oddly persuaded Obama that it would be destabilizing to adequately arm the Ukrainian military.

Since 2000, the U.S. economy has grown a scant 1.8 percent a year, and one of the biggest challenges facing the next president will be finding the money to maintain an adequate Navy to secure the Pacific while maintaining an essential presence in the Mediterranean and Persian Gulf.

What is remarkable, though, is how fatalistically Obama has doubled down on the failed Clinton and younger-Bush policies.

Prominent economists on the left, right and in between have suggested policies to get the dollar fairly valued against the yuan and other Asia currencies but the president steadfastly rejects even considering those.

His broader approach to security issues is appeasement. Specifically after Russia’s veiled invasion of the Crimea, he just about apologized to Moscow by lamenting the region was predominantly Russian speaking and historically part of Russia.

Most recently, he sent his Secretary of State to Russia and China, where Putin reiterated claims that Ukrainian patriots—not Russia regulars out of uniform—are in a revolt and Foreign Minister Wang claimed China really owns the South China Sea.

Back at the White House, Obama declared a success a “summit” on Middle East security that the leader of the most powerful Arab state, Saudi King Salman refused to attend and King of Bahrain skipped the event in favor of a horse show.

To all of this, the president pretends diplomacy is a substitute for resolve—and the exercise of American power.