Getting the Couch Potatoes Back to Work 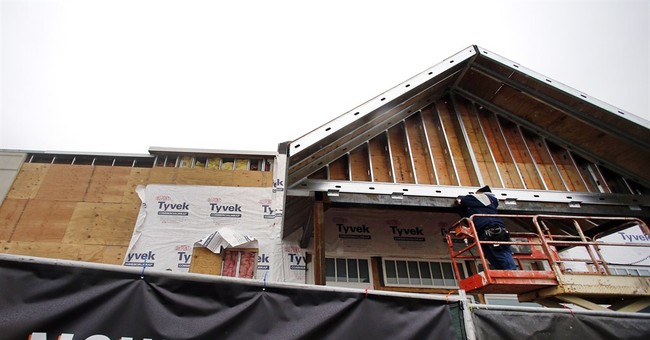 In 2014, GDP growth bounced back in the spring and summer from a tough winter but in the fourth quarter, fell off to 2.6 percent. History indicates the country should be doing a lot better—simply, too many prime working age Americans are despondent and have permanently dropped out of the workforce.

After a deep recession, Ronald Reagan posted 4.7 percent annual growth over 22 quarters and employment jumped 13 percent, whereas President Obama’s recovery has accomplished half that progress.

Were the economy firing on all cylinders as it did in Reagan’s time, it would create more than 500,000 jobs a month, instead of the 225,000 expected going forward.

That would surely inspire many of the one in eight men 25 to 54, who are neither employed nor looking for work, to get up off their couches and do something useful with their lives.

Oil prices falling to $60 a barrel was a blessing but at $45, many U.S. producers can’t earn a profit and are cutting back on drilling. That negates much of the gains in consumer spending from lower gas prices.

Along with continuing legal woes and cumbersome regulations holding back the financial sector, layoffs in the oil patch are a big negative for the economy—and prices are not likely to recover significantly any time soon.

Supporters of tighter business oversight and a more aggressive tax agenda are distributed among swing states in the Electoral College so as to make Obama’s intransigence on business regulation and insistence that loopholes be closed to finance new government spending and redistribute income a potentially winning formula for Democrats in the 2016 presidential election.

Those competing agenda block meaningful progress on regulatory and tax reform until Democrats nominate a moderate, pro-business candidate or Republicans find a standard bearer more appealing to Hispanic and moderate women voters than most of its aspirants.

Economic weakness, dysfunctional governments and central banks printing too much money to paper over messes in the Eurozone, China and elsewhere in Asia are pushing down the exchange rates for foreign currencies against the greenback.

It’s great to be an American tourist in Paris these days, but the strong dollar is making U.S.-made machinery, chemicals and other products too pricey. This encourages a new wave of offshoring and automation that kills thousands of jobs. Also, taking a beating are the overseas earnings of U.S. giants like Caterpillar, DuPont, Microsoft, and Proctor and Gamble.

President Reagan, when confronted with similar harm to American economic interests, negotiated the 1985 Plaza accord with Japan and the major European economies—China was not yet a force—to lower the value of the dollar and ensure a fair deal for American businesses and workers. And he was all for producing more energy in America.

These days, policy is going the wrong direction. The president continues to block most offshore oil development that could do much to boost U.S. investment in infrastructure, manufacturing and R&D.

He seems bent on obtaining authority from Congress to negotiate new free trade deals in Europe and Asia without strong safeguards against beggar-thy-neighbor currency policies that destroy American jobs.

Regardless of whom the Democrats and Republicans nominate in 2016, the country needs a leader who can articulate to voters the imperative for pro-business regulatory, tax and foreign trade policies that support making stuff and creating jobs in America.

Workers sorely need an advocate—sadly, they don’t have one now.