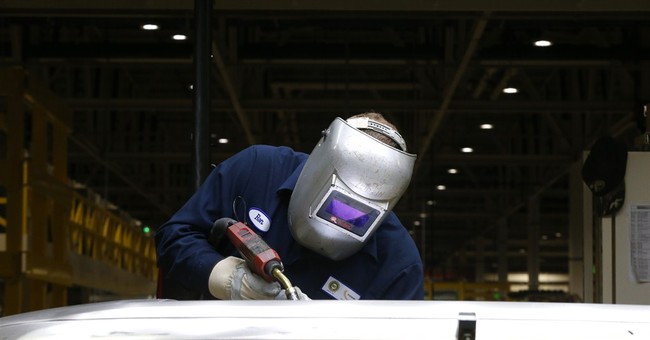 Friday the Labor Department is expected to report the economy added 245,000 jobs in December. That’s down from 321,000 in November, and a slower economic growth will likely drag on jobs creation through much of 2015.

After a tough winter and brief economic contraction, the economy grew at a 4.8 pace the second and third quarters in 2014.

Going forward, household finances are in their best shape since the financial crisis and consumer spending should continue to lift the recovery. Also, much postponed business investment—for example in the commercial real estate and accompanying office fixtures and IT businesses—may be expected to boost growth.

However, weakening conditions in Europe and foreign governments’ policies that artificially overvalue the dollar against the yuan, yen and euro will slow U.S. exports, especially for technology-intensive capital goods and software that compete with Chinese, Japanese and European offerings.

Lower oil prices cut two ways. Adding to household disposable income, those boost consumer spending on cars, appliances and household goods. However, lower oil prices adversely affect drilling activity, and more of the money spent by households at Wal-Mart likely ends up in Asia to pay for clothing and electronics than money spent by wildcatters searching for fossil fuels.

Overall growth should range between 2.5 and 3 percent in 2015, and that will not support jobs creation of more than 235,000 per month unless productivity growth is weak.

The jobless rate is down to 5.8 percent but that is deceptive. For example, one in six adult males between the ages of 25 and 54 is not working. Many don't show up in the unemployment count, because they are not actively looking for a job.

Since 2000, Congress has enhanced the earned income tax credit, and expanded programs that provide direct benefits to low and middle income workers, including Obamacare and Medicaid, food stamps, and rent and mortgage assistance.

Many unemployed men combine assistance from wives, other relatives and friends with government benefits to avoid work altogether or cling to part-time employment to avoid tripping household income thresholds that would result in the loss of benefits.

Similarly, many women with good skills and education, who might enjoy the fulfillment and independence of working, are encouraged to avoid employment or accept only part-time positions.

The whole system encourages retailers and other employers to chop two jobs into three and limit hours to less than 30 per week.

Also missing from the jobless statistics are college graduates who, encouraged by promiscuous student loan programs, have returned to school to obtain fancy sounding but often useless graduate credentials. After a few years, they end up back in their parents’ basements, saddled with huge debt and still underemployed or jobless.

The GOP Congress could work with President Obama to fire up growth and jobs creation.

With gas prices so low, raising the excise tax that funds federal highway trust fund in line with inflation since it was last adjusted in 1997 could be used to finance sorely needed investments in urban roads and transit systems.

Corporate tax reform that eliminated special credits and exemptions that favor some activities to lower rates for most businesses would support more efficient investment decisions and stronger growth.

Congress should require that the proposed trans-Pacific free trade agreement include provision with real teeth to eliminate currency manipulation by the Japanese and other participating governments.

In this century, the U.S. economy has expanded 1.8 percent per year and created about 7.3 million jobs, whereas the comparable figures for the Reagan-Clinton years were 3.4 percent and about 43 million.

An aggressive effort to rebuild America’s infrastructure, tax reform and sound trade policies could easily raise growth to 4 or 5 percent and increase jobs creation to 300,000 to 400,000 a month.